12/17
Today was the first ever designated Audubon Christmas 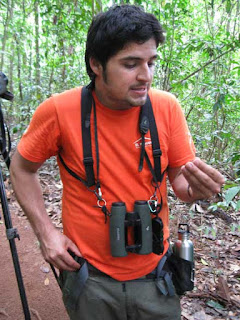 Bird Count Day for this part of the Osa Peninsula -- history in the making, and I was part of it. What an honor! Actually, anyone with binoculars who wanted to participate was invited, so off we went with Gerardo (pronounced Hair-ardo), the naturalist, up El Remanso's Ridge Trail to see what we could see.

Gera is the BEST naturalist ever, and I count him as a special friend, having first met him in 2007 on his first day at El Remanso. He can answer almost any question put to him, and if he doesn't know, he'll say so. He's an excellent guide to the mysteries of the tropical forest. Here he's holding an anole lizard, having just shown us how it flips out a colorful flag on its chin to warn off intruders or impress the ladies (lady anole lizards, that is). 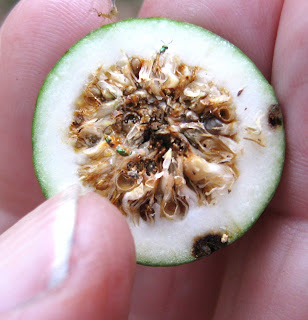 saw many wonders, from sloths to trogons (and numerous other birds) to squirrels and a coati nestled on a branch overhead. Gera cut open a tiny fig fruit and we were able to observe the tiny fig wasps which pollinate it (be sure to look at it close-up ~ there's one near the tip of my thumb).

Later that afternoon we took one of the Lodge trucks with seats along the sides of the bed and bounced off down the road to find more birds, including this toucan I photographed through Gera's spotting scope.

We kept getting distracted by monkeys, though, actually 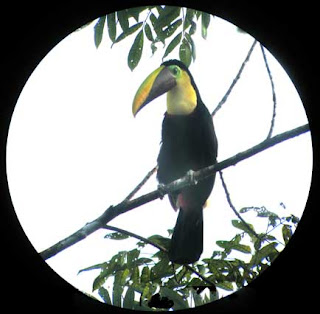 seeing all four species that live here along the road to our specified birding site, a large open meadow with a fringe of trees. Which monkeys? Well, there were howlers, spider monkeys, squirrel monkeys (with at least one baby in the troop) and capuchin monkeys. I never have much luck photographing monkeys in the dark trees, but at least this howler is recognizable as a 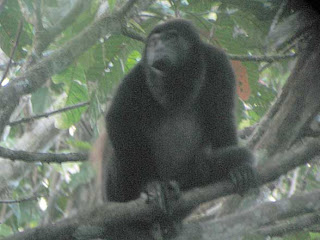 During this day ~ along Ridge Trail, the road to the Lodge and in the meadow ~ we spied about 79 species, including Smooth-billed Anis, White-necked Puffbird, Crested Caracara, Bare-throated Tiger Heron, Mangrove Cuckoo, Mangrove Black Hawk, and many others. We likely would have tallied more if we hadn't kept being distracted by other fascinating things, but I guess I'd be pretty stupid to complain about such a "dreadful" circumstance! 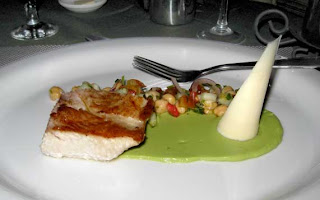 that night was so gorgeous I couldn't help taking a photo of it. All dinners in the restaurant are served by candlelight to keep electricity use to a minimum ~ in keeping with El Remanso's efforts to maintain a low footprint in the ecosystem. The presentation of all the meals is exquisite, and this braised fish was no exception.

I didn't get much sketching today. It was all images "in" and few 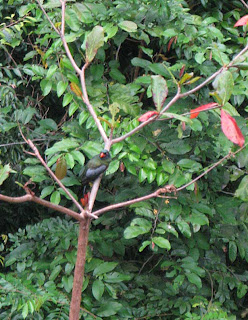 images "out" although I managed a little drawing of a Slaty-tailed Trogon which I watched for several minutes from the railing of the restaurant. You can see the trogon in the image at right, in the center along the main trunk if you look at it close-up. Since the restaurant is high above the ground, you can look DOWN into the trees for lots of great sightings. 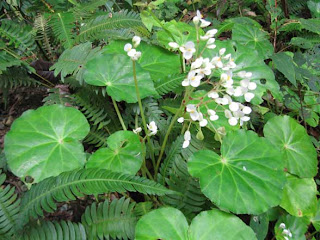 After yesterday's birding activity, I was all set for some solo adventuring and major sketching, so I took the trail down to the beach, pausing frequently to appreciate the flora along the way.

I'd been hoping to find an Ojo de Buey, which is the Ox-eye seed that grows on a vine along the trail. Imagine my delight to 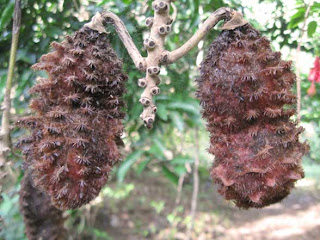 find the vine producing huge, fresh seedpods. I reached up to touch the fuzzy surface and immediatly got a handful of tiny spines! It took me ten minutes to pull them all out. Glad I had my binoculars ~ looking at the stickers through the wrong end magnified them enormously and I was able to get all those little buggers out. Ouch!

Looking around, I was able to find two seeds from last year along the trail. What 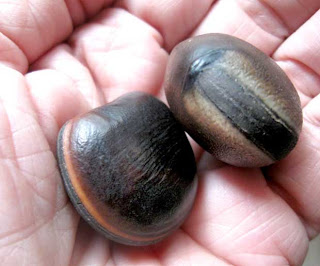 beauties! One was to be for Daniel. Sure wish he had been able to come along ~ but I was having a blast nevertheless.

Continuing down the hill and out onto the sand, I was met in the very first minute by a scarlet macaw gleaning almonds in the beach almond tree at the foot of the trail. 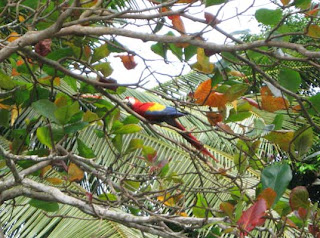 Beach almond trees almost always have some red and yellow leaves, so the macaw was amazingly difficult to see. I was able to get a quick outline sketch of another one I saw further down the beach, then I was delighted 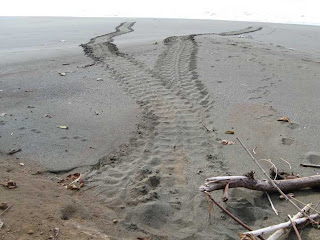 to find a bedraggled-but-beautiful macaw feather washed up by the waves.

I came across what for a brief moment I took to be a set of tractor tracks in the sand ~ but then remembering that there are no tractors around, I realized it was the trail of a sea turtle coming from the ocean to lay her eggs, 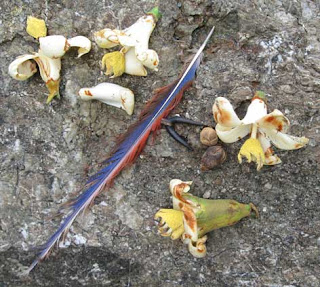 then returning to sea. I sketched the tracks and the nest site, then continued on down the beach, picking up seedpods and fallen tree flowers to sketch as I went. 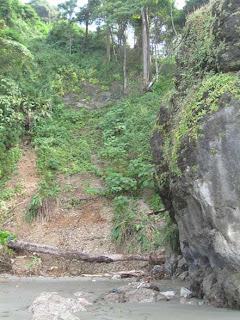 into my favorite sketching spot in the shade of a huge black rock just yards from the surf, I sketched until my bum was numb (good thing I brought that little sitting pad, or I wouldn't have lasted as long!). Here's part of one sketch page ~ the end of the feather crossed over onto the facing page. 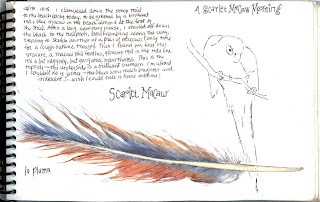 After a break I sketched other things I'd found on the sand, discovered some ocelot tracks (they look like big house-cat tracks), then headed back up the trail for lunch. But I almost missed lunch when I got seriously sidetracked by an amazing thing I hadn't seen on my trip 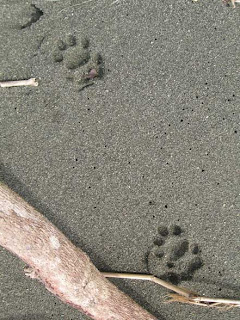 At first glance, it was obviously a clump of mushrooms. 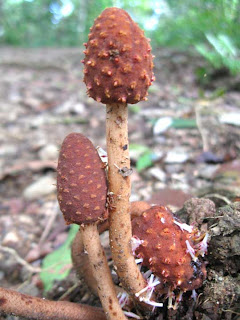 But these "mushrooms" had evenly spaced bumps on them (no mushroom has those), and the oldest, wilted-looking one had actual flowers poking up out of each bump! Gera later identified it for me as Helosis cayennensis (it IS cayenne-colored) and not all that commonly seen. What a thrill!

During happy hour in the restaurant lounge, I decided to try drawing by the light of my 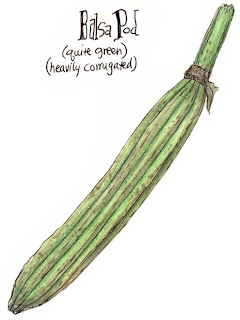 battery-powered book-light (remember, it gets dark on the equator by 6pm), and I am happy to report that it works extraordinarily well. Here's a balsa pod I drew and painted with watercolor pencils solely by the light of the booklight (plus a candle, delivered by the waiter, Eljer, unasked, to light the pod). It worked perfectly!

That meant I'd have evenings to draw and sketch both here and later on the Amazon (I packed extra batteries, just in case). With this realization, I grinned, put up my feet, and relaxed with my Margarita. The perfect end to a great day.
Posted by Irene Brady at 10:40 AM

Ox-eye seed -- that's what that is! I had one my grandmother gave me when I was a kid, but I never knew what it was. I'm pretty sure she didn't either. Wonder where she got it????

Good question! Someone told me the Costa Ricans often carry one in the pocket for good luck. Seems to work for me!