12/23
[warning: there are two images of spiders in this blog,in case
you are one of those people who panic at the sight of eight hairy legs]
Dawn found me hanging over the bannister outside my door to drink in all the sights and sounds. The night before I'd been lullabied to sleep by all manner of frogs, crickets, and perhaps nightbirds. This morning I was awakened by a choir of birds, including the liquid "coo-bloop-wheeoo" of either an oropendula or yellow-rumped caciques (I never did sort that out). 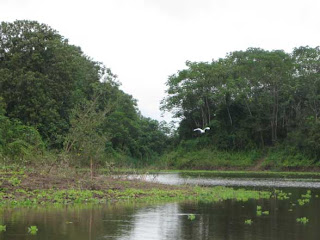 Birds were flitting through the trees across a narrow strip of garden as the sky quickly brightened.

Today we'd go in search of a giant Ceiba tree, across the Amazon and up a 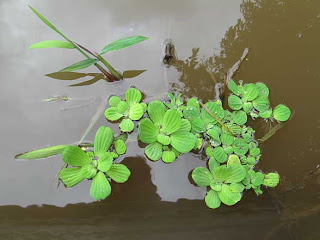 small tributary to the south. There were many birds to see along the way: egrets, hawks, yellow-rumped caciques (say Ka-SEEKs), long-toed jacanas, and many others. 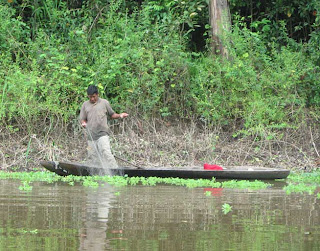 Fishermen plied the waters with nets ~ several nets were strung across the river and our boatman had to lift the motor to cross over them.

We passed one little boy diligently rowing a long boat with a younger girl aboard. They 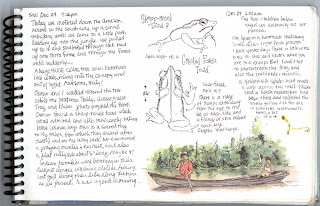 eyed us solemnly as we passed. I drew them later from my camera viewfinder. Here's the page they're on.

There were numerous little land holdings on the banks we passed. Here's an assortment of things we saw. from left to right: a tree full of the hanging nests of yellow-rumped caciques, the boat children, and a small farm with black pigs roaming free. 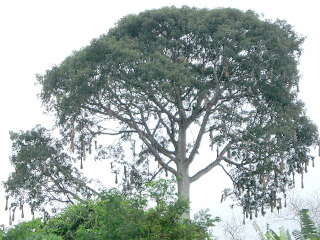 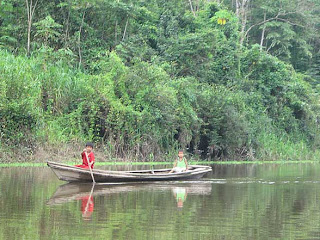 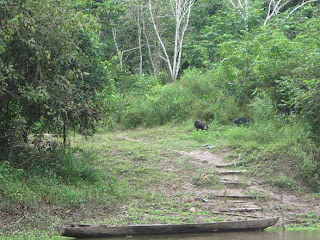 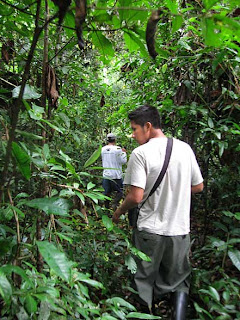 length our boat swung into shore and we climbed a steep bank up into the dim forest. It was beautiful inside, and within a few yards we accidentally walked through the web of a golden-silk spider ~ if you live in the southern US, you will be familiar with this big orb-weaver. 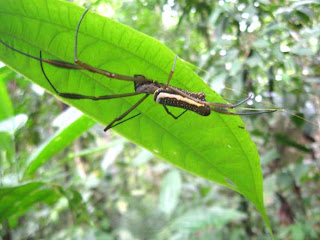 In the Everglades they make orbs that span the boardwalks. This one was even bigger, and Osmar twisted some of the web together and gave it to me (it's glued into my journal just above the boat children, on the right edge ~ see above).

After a short walk, following the boatman who was swinging a machete (plants grow so fast in the jungle that a machete-cleared trail will grow back together in a very short time) we came to the giant ceiba tree. It was unimaginably huge, with buttresses stretching out fifteen feet to the side. Osmar took

a picture of me with the 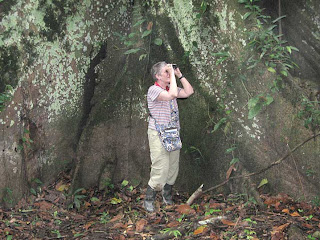 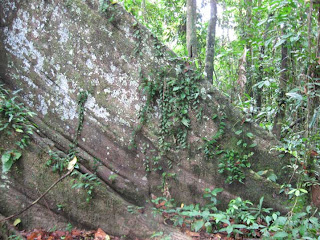 binoculars, standing at the base of the tree, but it doesn't really show the size. On the opposite side of the tree, in an open space, I could get far enough away to see it, so I took three vertical pictures which I have stitched together here. I used the image of me from the other picture to try to show you how very small I am compared to that tree. I couldn't get over the immensity of the tree and its wall-like buttresses.

Near the Ceiba tree, Osmar found a Crested Forest Toad (we thought it was a Sharp-nosed Toad, but the stripe down its back means it's the Crested Forest Toad). I sketched it on the sketch page above. On our way back to the boat we surprised 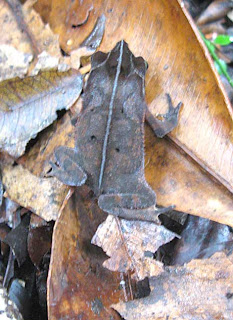 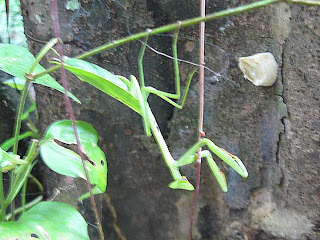 Rain started misting down as we descended the bank to the boat, but this is the rain forest, after all, and since the air was warm and the mist wasn't really cold, it turned out to not be a problem EXCEPT....

And here, dear followers of my packing blog, 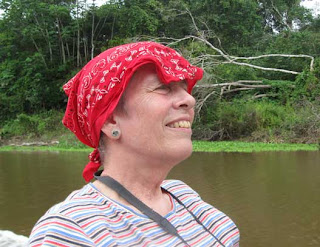 I have to confess to the failure of my lovely bandana/hat invention due to humidity. If you recall, I explained how to turn your bandana into a sun hat. But on the boat, when the sun appeared and I pulled my bandana out of my bag and folded it into a sun hat, I realized that the 100% humidity of the Amazon completely spoils the effect (and effectiveness) of the thing. It's a flop (literally) in a humid climate. Oh well, it'll still work for desert rats and people that live in "normal" humidity. 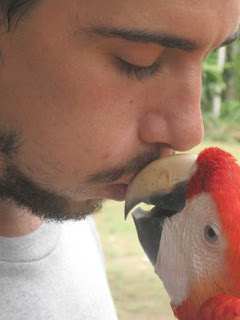 We got back in time for lunch and I had a chance to get acquainted with some of the denizens of Otorongo. Our host Antony was playing with Ara, the Scarlet Macaw. That bird shrieks "Lara, Lara, Lara" frequently, and I thought that was her name, but it seems that Antony named her Ara for her specific name, Ara macao. The Blue-and-Yellow Macaw (Ara ararauna) is named Azul, which is Spanish for blue. They have the run of the place during the daytime but are put in an enclosure at night so they won't be eaten.

The Spix's Guan also runs free. Her name is Penelope, and she pecks shiny things. 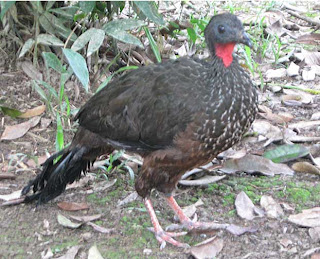 You don't want to get your shiny eyes too close to her beak...

And here is Tio Juan (Uncle John). He is a Yellow-ridged Toucan, Rhamphastos culminatus and a real clown. He terrorizes anyone who shows the slightest fear of him, but it's mostly bluff. I managed to get up the nerve to make "friends" with him after a couple of days, 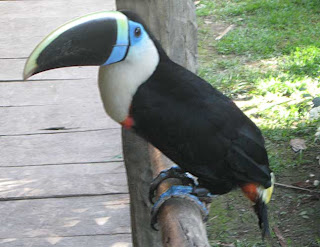 always being aware that he could do damage with that bill and that I had to be really careful to keep my face out of range.

Early afternoon was generally reserved for siestas in the hammock room (a lovely, cool screened porch with six hammocks rayed out from a central pole to the sides of the room.) In one of the hammocks I would nap, or sketch seedpods and snails, sketch 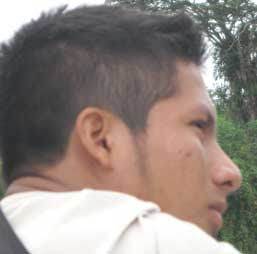 from my camera viewfinder, paint my drawings with watercolor pencils, and glue in things like the golden-silk spider web.

Discovering that Osmar was interested in trying his hand at sketching, I sat him down with an assignment (ever the teacher!) to see what he could do, and realized, looking at his first-ever drawing (done in ballpoint pen, at that) that he has a lot of potential.

So from that time on, whenever it worked for both of us, I provided him with a pad and pen, and gave him sketching lessons, first in drawing, then later in coloring with the watercolor pencils, and we worked quietly together through the hours. He was an apt student. 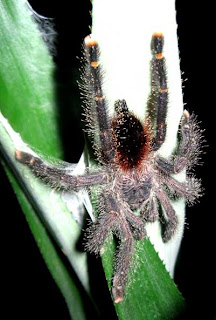 discovered a tarantula holed up in the top of a pineapple plant. Looking down into the top, I could only see its furry orange toes. Osmar said it would come out at night, so that night I went back and took a photo. Here it is, ready for intruders coming up from the ground.

Tomorrow we look for hoatzins ~ prehistoric-looking chicken-like birds that appear to be having a perpetual "bad hair day."
Posted by Irene Brady at 1:44 PM

I really love it that there are photos of YOU, which I didn't expect to be able to see. The one with the bandana hat is especially fetching!

Irene, the stitched photo of the ceiba is excellent!!

So happy you had a good time with us!
Anthony and Ivy

Hi Kate,
I have just enough ego to enjoy starring in my own productions! Of course, I don't show the BAD photos of me!

Hi Anthony and Ivy!
Thanks for stopping by for a read. I'm glad you approve of the ceiba tree I cobbled together. If you spot anything in future posts that I misrepresent in any way, let me know and I'll fix it.

I DID have a good time at Otorongo, obviously!