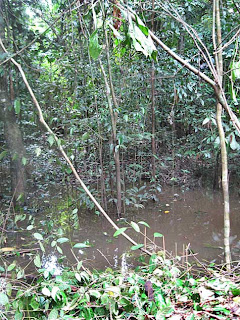 I had hoped to be able to wander at will in the jungle behind the lodge, but the lodge owner, Anthony, is very aware of the ability of snakes to hide unseen next to the trail (and by now, I should be, too, although it's hard to watch every step you take when surrounded by the amazing things in this Amazon jungle!). He kindly but firmly discouraged me ~ exploring the clearing around the lodge was fine, but not melting into 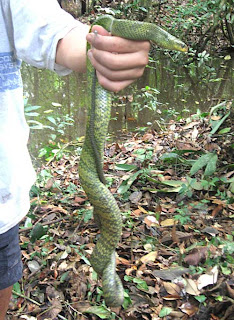 Sensing my disappointment, Anthony and Ivy personally accompanied Osmar and me through an area of Otorongo they're developing, diverting a creek to create ponds and trails, and creating a small hydroelectric dam for small-footprint-electricity. As we walked along with Anthony pointing out interesting mushrooms and plants and describing his plans, there was a crash directly behind us, and Osmar quickly pinned and caught a Giant Bird Snake whose branch had broken as it slipped through the canopy above in search of birds (okay, okay, I get the point ~ snakes are all around us!). 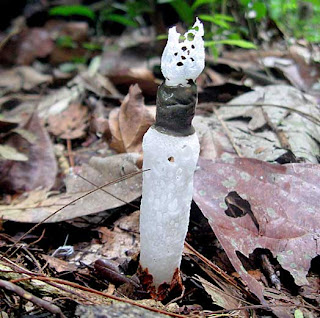 After getting some pictures of it then releasing it, we came across a gorgeous filareed mushroom. Anthony said that the lacy top part would grow and spread, finally reaching the ground like a hoop-skirt. I took a photo and planned to take another on the way back to the lodge 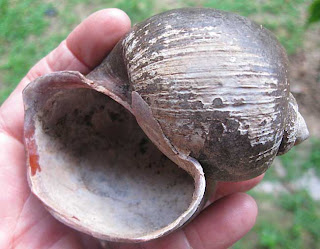 to record its growth (hey, mushrooms grow fast). Delivering us to a good sketching spot, Anthony and Ivy returned to the lodge while Osmar and I set up to draw.

Much taken with the snail shells I'd been picking up as we hiked, I sat sketching their smooth spirals until a movement in the leaves caught my eye: 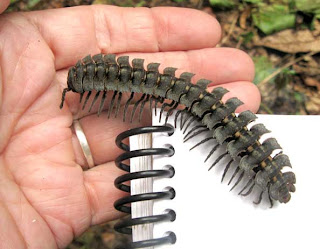 a big millipede was crawling slowly toward me. Fortunately 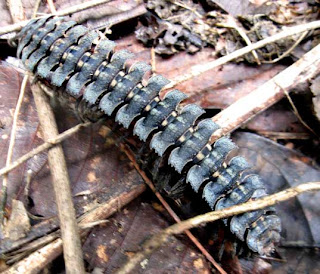 for my peace of mind, I decided it was the same species a guide had been handling near the giant ceiba tree a few days before, and millipedes are generally harmless, so I put my hand down for it to crawl into. It did. I googled it a little while ago, and it is apparently called a "tractor millipede" but that's the best I could do for identification. I had to sketch it coiled up because as soon as it would uncurl it would start to flow away ~ so I kept nudging it to keep it coiled until I was done. Its portrait ended up on the snail page, below. 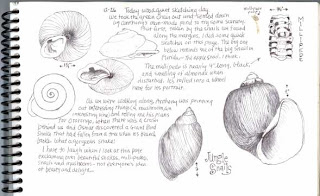 Now, while Osmar drew a seedpod he had found, I moved my folding chair to the edge of a little swamp to sketch a tree decorated with a nasute termite nest. These termites build their mud nests in the trees, connected to the ground, where they forage, by hollow mud tubes through which they can pass safely hidden from predators. Look at the tube 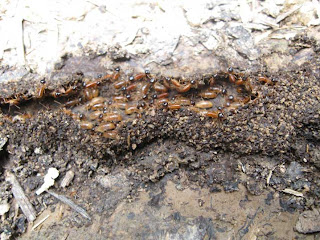 in the image at right ~ we broke through the roof of this tunnel on the side of a tree, but it would be repaired within the hour.

I had been planning to draw some jungle scenery, and this was the perfect time and place to do it. My pleine air (scenery done on site) sketching has been very limited, and this was a good opportunity to stretch my wings. 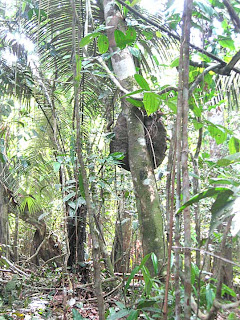 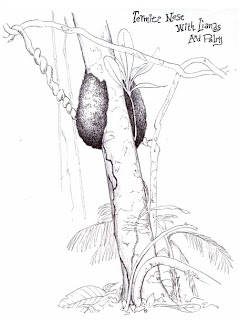 I explained to Osmar, the success of a scene may depend in large part on what you leave out plus what you add in. Here are my scenes and the drawings I did of them.

I took some liberties, obviously ~ leaving out non-essential items and adding palm leaves and lianas from just outside the picture area. 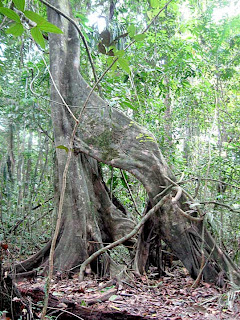 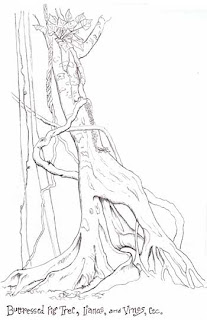 I still haven't painted them. Maybe I won't ~ I really like their spare look.....

Osmar, in the meantime, finished his seed with some advice from la profesora (me) 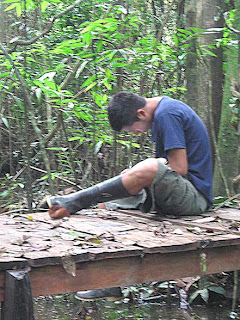 and was busy sketching the same buttressed tree I was now drawing. It had been a cool, overcast morning (about 85°), but now it was thinking about sprinkling, so when our drawings were finished we started back down the trail watching for the lacy mushroom I wanted to photograph again. Alas, it was gone ~ eaten by some hungry passer-by. Foo.

Lunch was ready when we returned. On the table next to the kitchen, the staff had put out the racks of plates, glasses and utensils, and we came in just as the steaming serving bowl of soup and the slices of garlic bread, plus a plate of sliced buffalo cheese, were placed on the table. Filling my glass from the pitcher of pineapple juice fresh from the garden, I claimed a spot at the dining table and dug into my plate of good, simple 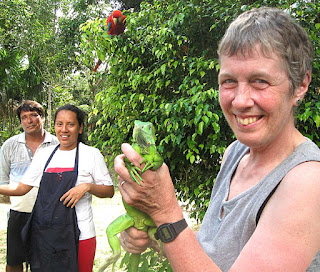 While I was at Otorongo, the number of guests fluctuated almost daily as people came for varying multiple-day stays. There were about five of us this day, plus three guides and Anthony at the table, sharing our morning's adventures with much laughter and joking. Suddenly 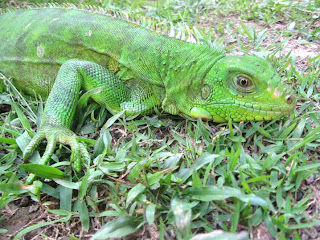 there was a hail from outside the dining hall, and we abandoned lunch when we realized that one of the staff had caught an iguana for us to see. Brilliant green, with beady brown eyes, it endured our handling stoically as we took turns learning how to hold it so it wouldn't be frightened. At length, we released it, and it dashed across the lawn to 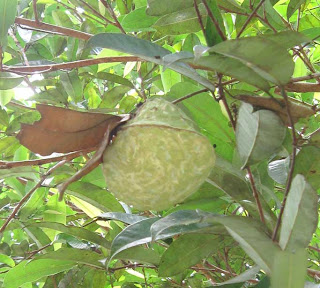 the safety of the jungle, none the worse for wear.

I decided to do some birding and to explore the grounds a bit with my camera, putting off more sketching until later. I photographed a flowering vine in the yard with gorgeous pink flowers, and out in the palm orchard, Osmar showed me a wasp nest that looked 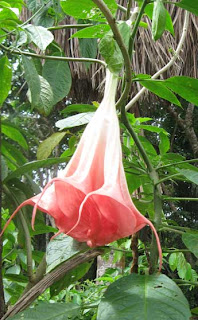 almost exactly like a green fruit (see the image above). In the back yard was a fascinating tree with hanging fruits. There were wonders everywhere I looked, and I also spent some time playing with Tio Juan, the toucan. 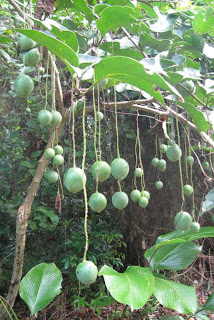 I had figured out by now that the way to interact with Tio Juan was to first grab his bill. Then you could come in closer and play with him. If I kept my distance, his tendency was to peck at me. Holding his bill, I could slip a finger in his mouth and twiddle his eight-inch tongue ~ which looked like a long, skinny piece of plastic with a serrated edge. The toucan didn't seem to mind this exploration, and it was now that I discovered that his nostrils were situated on the TOP of his marvelous bill (check out the image close-up). I generally kept my hand on his beak so that he couldn't peck at my face (not necessarily with evil intent ~ but he IS a rascal). 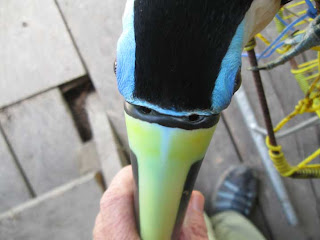 afternoon, so I took a short siesta, then around 4pm, I fetched Osmar and we spent the rest of the daylight hours sketching and painting in the dining room ~ Osmar on his drawings, and I on mine.

His progress was astonishing, and it was a real pleasure to work with him as he learned. But we had a sense of urgency ~ I only had two more full days at Otorongo, and I wanted to leave him with his skills well enough developed that he could continue on his own. At the same time, I had no intention of shorting myself on doing every Amazonian activity I could cram into every day. So I started hatching out a plan. More about this later.
Posted by Irene Brady at 3:57 PM

The gift of sketching that you left with Osmar will make him remember you the rest of his life. What an incredibly special thing to be able to do! I hope to see his work, too.