12/29
My Birthday! From the get-go I had planned a memorable day 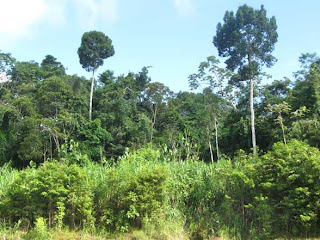 to console myself on this yearly occasion commemorating the regrettable fact that I have completely used up another of my finite number of years. WaaaaaaaH!

As a consolation prize, I had wanted to be able to say, "I spent my 67th birthday on the Amazon River!" And so I did!

But first things first: a trip to Jajun Cañon was in the offing. I was a little puzzled at the name "Cañon" because it translates to "canyon," and to me that denotes a deep cleft in the earth. How deep can you go with the water table a couple of feet down? And in the Google Earth flyover I made with Daniel before I left home, I hadn't noticed any mountains in the vicinity of the Oran River between which one could travel, as in a canyon. Hmmmm..... well, we would 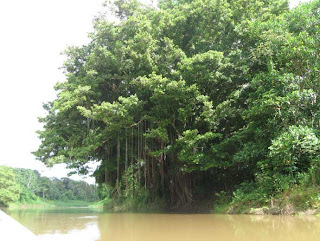 Okay, now. Pretend you are charged with propelling a boat up a river without hitting any submerged logs. Now pretend that at the same time you are also charged with finding sloths for the guests you are escorting. This was the task of our boatmen, and time after time they pointed out sloths in the trees alongside the river. 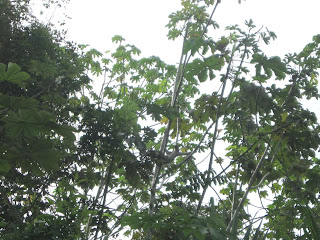 Can you see the sloth in the image at left? Because that's the view the boatman has. Okay, click on it and see if you can spot it. That's a binocular view, and with that you can probably see the sloth-blob ~ but the boatmen don't have binoculars. My hat is off to their sharp eyes!

They also pointed out a troop of monkeys passing 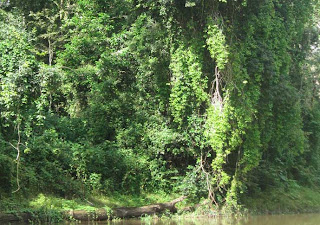 through the jungley mass at right. I saw an occasional moving black form but I'd never have been able to identify them. Anis (a large black bird with a honky beak), kingfishers, egrets and hawks were all over the place, and Osmar was jubilant when we passed under a huge tree decorated profusely with the hanging nests of oropendulas ~ right in the midst of two big mud ant nests and at least two large wasp nests. 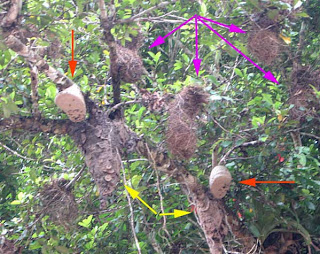 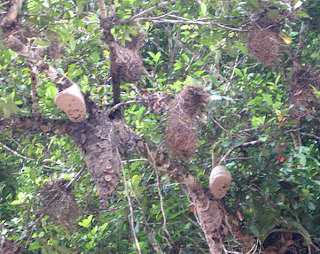 He had just been reading that these birds often seek out the protection of ants and wasps which become accustomed to them but attack unfamiliar outsiders (how smart is that!). And here was a perfect example. Be sure to look at both images. Red arrows point to wasp nests, yellow point to ant nests, and purple arrows point to the bird nests.

I think my favorite sighting, though, was a pair of turkey-sized, black Horned Screamers, Anhima cornuta, perched in the very top of a large tree (alas, we didn't hear any screams). 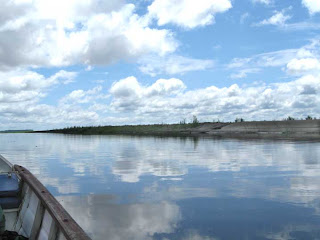 Apparently these huge birds sometimes soar like vultures, high in the air. What a sight that must be!

At length, after a very satisfying outing, we returned for the last time to the lodge so that we could eat lunch and finish our packing. In the end, I was still confused about where the name Jajun Cañon comes from (I should have asked).

During lunch, Anthony discovered that Osmar and I had not found, during our Christmas frog hunt, the local celebrity, a poison frog as yet unnamed and found only at Otorongo (as far as anyone knows). He donned his rubber boots and went out to find one, returning awhile later with the most delightful little amphibian I had ever seen ~ it looked like a red frog immersed in a blue-green bubble bath. (In fact, it looks a lot like the Red-backed Poison Frog, 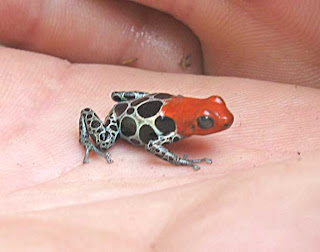 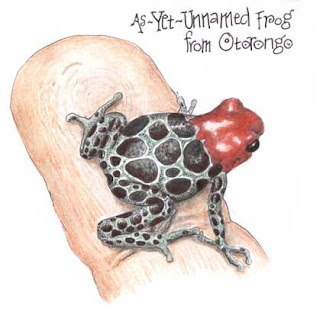 Dendrobates reticulatus, but with much less red area and greener bubbles.)

What a beauty! It was irresistible to sketch. And what a cherry on the birthday cake of my last day at Otorongo!

I spent the last few 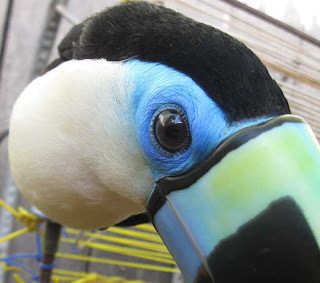 minutes on the porch saying goodbye to Anthony, the staff, and that rascal Tio Juan, then we all trekked down to the dock and set off upriver toward Iquitos in the launch.

The weather was sunny at first, but as we chugged our way upriver toward the west, the fluffy clouds turned black underneath, and for part of the trip we rolled down the clear plastic curtains you can see along the boat's sides in the image below. 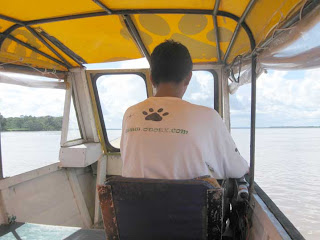 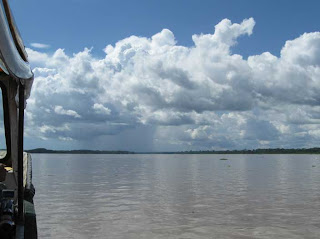 Here are some of the sights we saw: eroding banks on both sides, sometimes with big trees fallen into the water ~ this is a normal, seasonal occurrence as the river floods and recedes; a family crossing the river with an umbrella (good for sun or rain!); a river bus named Titanic III (any guesses as to what happened to Titanic I and II?) 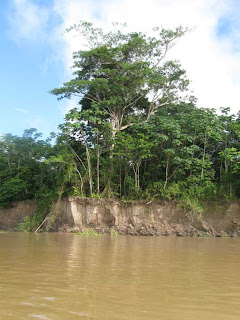 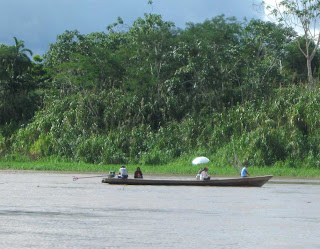 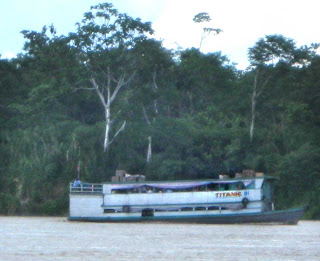 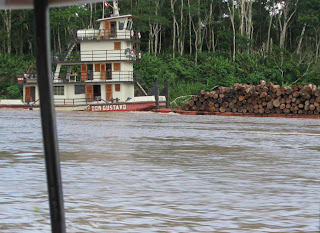 logs downriver. It didn't look very stable to me, but it must be capable or it wouldn't last long on this wild river.

Finally we began to see more and more mud steps leading up the bank, and 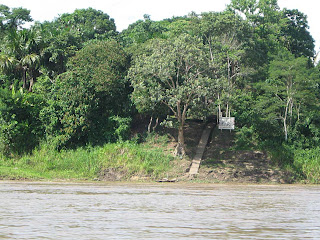 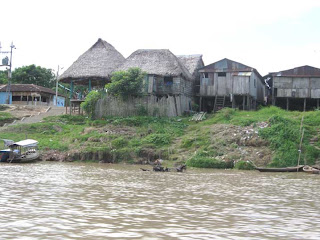 we passed the community of Santa Isabel ~ which I only know because they had hung a sign on a tree at the foot of the mud steps. A large cluster of thatch-roofed homes announced the outskirts of Iquitos, 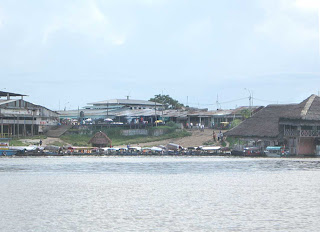 and finally the dock, where most of the river traffic noses into Iquitos, appeared.

I was filled with real sorrow to see my Amazon River journey end, 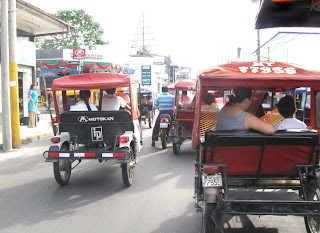 but there was still the prospect of one more exciting ride through Iquitos on the Motokars to look forward to.

Then, after some touristy shopping for trinkets along the Boulevard and a long chat with Osmar on a park bench in Plaza de Armas, I made my sad goodbyes to Osmar and Ivy and caught a taxi to the airport. 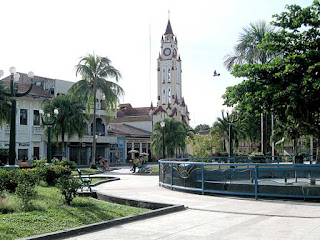 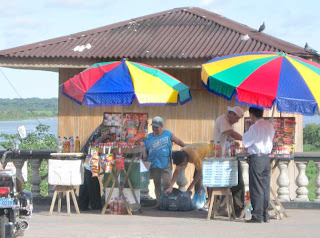 I would take this journey and stay at Otorongo again in a heartbeat.

But the less said about the 30-hr trip home, the better. It wasn't as bad as it might have been, though. When we were in the air over northern California, the pilot announced that there was dense fog at the Medford airport and we might have to fly on to Portland (oh no! Not another night sleeping on airport chairs!), but it lifted enough for us to land and you could probably hear the cheers from the passengers clear back in Iquitos. We landed at 11pm and my Daniel was there to meet me, wanting to hear about my adventures, glad I was home. A perfect ending for my Amazing Amazon Journey.

Here's to your own journey into the unknown!
May you have the determination and persistence
to do what your heart desires,
no matter how impossible it may seem at first.
Bon Voyage!

I just wanted to let you know how much i have enjoyed reading about your trip. I have looked forward to each instalment, turning to your blog as soon as I switched my computer on each morning.
Loking forward to seeing more of your artwork from the Amazon.

Gayle, I can't tell you how honored I feel to receive your letter.

Preparing the photos and writing the blog took hours every day, and to know how much pleasure it gave you makes every second worthwhile.

Thank you so much for taking the time to let me know.

I'm sneaking a peak but will spend more time to peruse your trip. I thought of you often. Somehow I knew you were a fellow Capricorn :) Hold your head high, girl. I hope I can have such a memory on my 67th B'day!

Ah yes, we Capricornies tend to adventure well! I now project positive thoughts into the future regarding your 67th. May it be as fine as mine! Thanks for stopping by.

I'm now about a third of the way through my tutorial for this sketch/journal. It's going well, and I'm having a third go-round at this trip. How blessed I am for this opportunity! I expect to upload it for download within the month. Wish me luck!

oh my goodness, such an amazing looking frog! awesome to see it, thanks.