Thunder and lightning overnight was accompanied by volumes 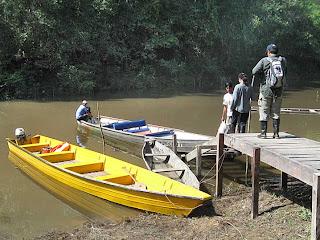 of rain now standing in pools all around the lodge this Christmas morning. All the guests were wondering if the day's outings would have to be canceled. Osmar and I had planned to go visit a lake covered with giant Victoria Waterlilies, which had intrigued me ever since, as a child, I had seen a photo of one bearing a baby on its surface.

But the sun came out and the pools soon subsided ~ and after breakfast we, plus Segundo the boatma 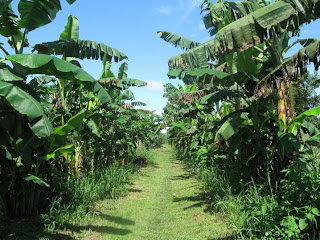 n, motored across the Amazon and upstream a bit until we came to a little mooring with a boat tied to it. Climbing up the steep bank on steps carved out of the mud by the farmer, we skirted 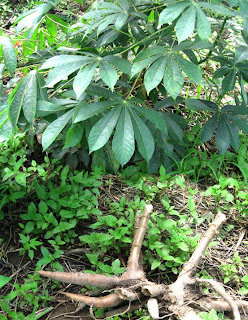 a couple of tarps covered with drying corn and walked down the aisles of a banana plantation. Then the lane crossed a cassava field interspersed with occasional sugarcane stalks. That's a cassava plant and the roots, at right, which are harvested to produce yuca, farina, and tapioca. Cassava is also known as manioc, quite a multipurpose plant, but the roots and leaves are poisonous until they've been soaked and cooked. 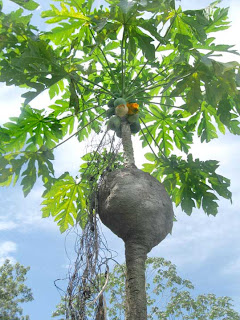 tree beside the lane was encircled by a termite (or ant) nest, but that obviously hadn't kept off whatever birds (likely caciques) had been eating the ripe papayas (you can see one that has been shredded, and another freshly opened in the clump of papayas near the crown).

Ahead in an opening, we could see what looked like a black igloo built on a platform. Up close, I could see that it was made of mud and 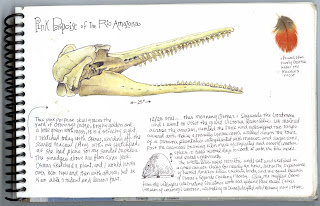 grass, beaten firm with a shovel (there's a drawing of it on the sketch page) . Osmar explained that this was a charcoal kiln, and under the mud coating were cut sticks slowly turning into charcoal due to the fire that was smoldering under the platform.

I grew up on a farm that wasn't terribly prosperous, and I know what lengths a farm family must go to in order to make ends meet. So I admired their initiative at the same time I mourned the trees that were cut to make charcoal (I can't even stand to see trees chopped down on TV). 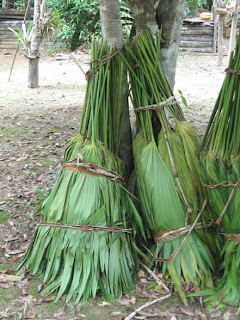 a pole frame, thatch roof, and wood planks to make a floor about 7' off the ground ~ stood nearby. Osmar said that the bank of the Amazon was collapsing there and would soon take the house, so they were moving all the reusable parts back from the river to build a new house. 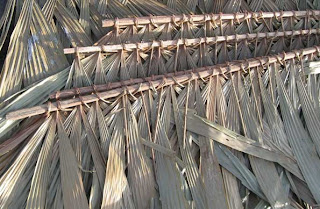 At left is one way roof thatch is prepared, using palm fronds like the ones leaning on a tree at Otorongo (above) waiting to patch a roof.

We passed an open-sided house where maybe fifteen people were sitting around listening to music, talking, and drinking beer and rum to the accompaniment 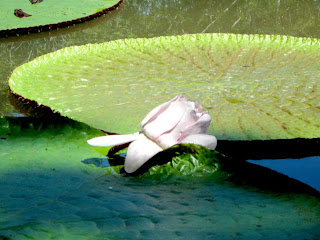 of loud canned music (probably off a CD) ~ celebrating Christmas the Peruvian way. Kids were playing underfoot and stopped to watch us pass as we turned onto a small path leading to the lily lake. 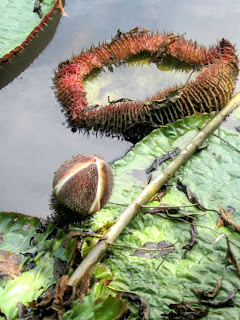 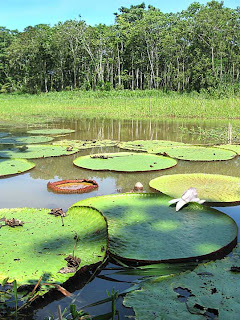 And finally, we reached the giant waterlilies ~ I was not disappointed. Such a leaf could indeed safely hold a baby ~ at least until it started wiggling!

Osmar set up my folding chair at the edge of the lake and I sat and sketched for nearly an hour, reveling in my good fortune of the calm, sunny day in a place I had fantasized about all my life. At length, happy 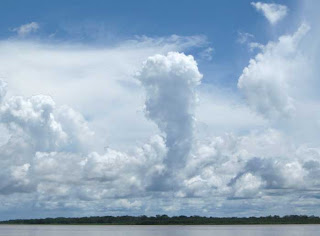 with my sketch, I finished up and we walked back to the boat and returned to the lodge under a bright blue sky decorated with fluffy white clouds and one amazing, towering thunderhead. 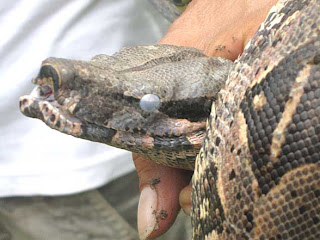 lunch we were treated to the sight of a red-tailed boa constrictor. One of the guides allowed it to twine around his arm and we had a chance to examine it fully. Antony explained that you could see that it was about to shed because the skin over its eyes had already detached and turned milky, and that as a consequence it could barely see. It was an absolutely gorgeous snake, and we got to photograph it stretched out on the grass. They were removing it from the 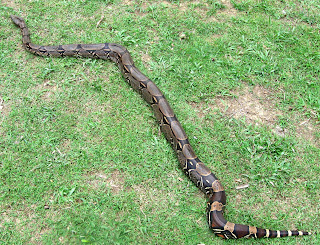 vicinity of the lodge for the comfort of the visitors, if I remember correctly. Here it is on the grass, about six feet long, I'd guess. 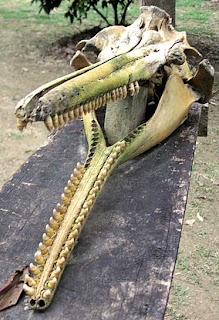 I sketched the Pink River Dolphin skull in the yard at Otorongo. It is a humongous skull, more than two feet in length. I love drawing skulls, and this one was a real challenge and delight (see the sketch page above). Osmar sat nearby sketching a bromeliad in his sketchbook, and I occasionally offered advice on technique and observation skills.

After dinner, we donned our rubber boots and insect repellent, 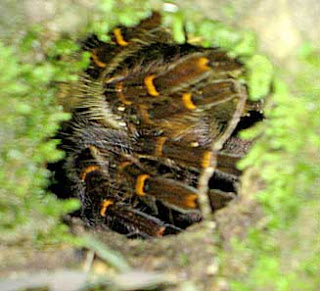 grabbed our flashlights, and went hunting in the dark around the lodge for tarantulas. Searching for and finding round 1½" holes in the ground, Osmar would poke in a grass blade and "tickle" the tarantula until it became irritated and would spring out to devour us.

Alas, we have been deceived about their ferocity. Once out on the ground, 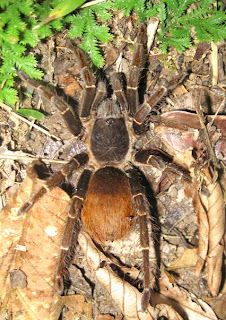 not seeing their usual food, they would stop dead and just stand there confused. We weren't ferociously attacked, chased, or even leg-run-up ~ NOTHING. Phhhht! I took picture after picture of tickled tarantulas, and never once felt threatened. So much for "deadly tarantulas!" 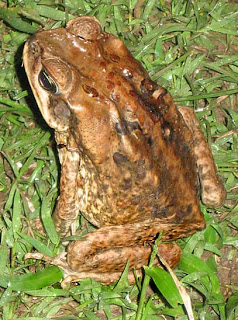 Switching over to "Reptiles & Amphibians," we next discovered a huge Cane Toad, Bufo marinus, along the path to the caiman pond. At about 4" in length, it was ponderously awesome. All of the guests were out 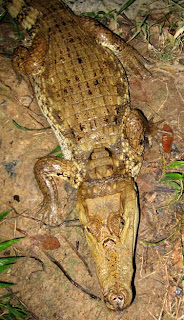 frogging and spidering all over the grounds, and I kept hearing exclamations over in the caiman pond area, so we headed in that direction.

The caimans in the little fenced pond, secretive and hidden by day, were out and about. One of them, about six feet long, was completely out of the water and posed for its picture. But that isn't what everyone was excited about. They were looking at frogs. 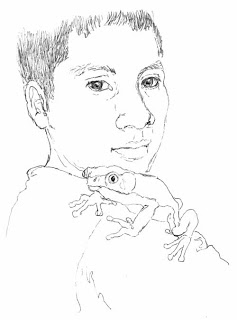 had promised me a Christmas present, the chance to see a giant frog, and he 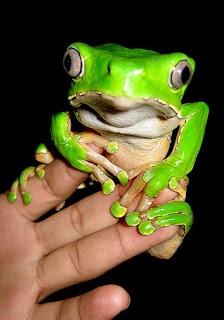 was making good on his promise because there, in the trees above the caiman pool, was an incredible sight ~ an absolutely HUGE frog ~ as big or bigger than the Giant Cane Toad we had just seen. This was a Giant Monkey Frog, and it isn't a hopper ~ it walks. Reaching up, Osmar gently edged it off its branch onto his hand where it peered at us unafraid.

It walked up his arm and onto his shoulder where I took a photo. I would have loved to hold it, but there was a chance I had mosquito repellent on my hands, which could kill it, so I refrained. Osmar lifted it back up onto its branch, where it dismounted quite calmly. What a gorgeous frog. This morning I sketched Osmar and the frog from the photo I took that night.

I had thought that this ended our evening adventure, and it would have if 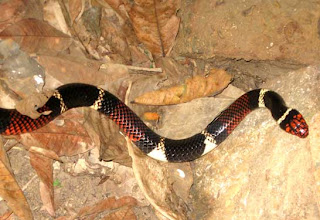 Osmar hadn't spotted this Aquatic Coral Snake rustling through the leaves before we started back to the lodge. The bite of this gorgeous snake is quite venomous, but its poison fangs are in the back of its mouth instead of the front, so you'd only be in danger if you were barefoot (or stuck your finger in its mouth, duh). We watched it for a long time, then Antony picked it up and took it back down to the dock with the observation that it was probably hanging around hoping for a Giant Monkey Frog dinner.

This has to have been the most amazingly memorable Christmas Day I have ever experienced. Hope you enjoyed it, too!
Posted by Irene Brady at 2:39 PM

Wowzer -- that Boto skull must be the champion skull of your entire life. WAY cool.

Boy, is THAT the truth! Hey, looks like you made it all the way through all the snakes and spiders, Kate. I wonder how many of the people who read this freak out around the second or third "ugly mug"....At the lodge I showed my pineapple-plant-dwelling tarantula to several of the other guests, and a couple of them were, you might say, VERY "hesitant to appreciate it."

I loved being able to click on the photos to see them large--very very interesting to read all about this fascinating trip -I see the large green frog has his nails done to match the rest of him...the skull I would want to bring home..and the conditions of heat and bug sprays means I'd never fit in on a trip like that if I was 17---never mind now...you're made of strong stuff!

good for YOU .....looks like the trip of a lifetime.!!! "viva la diversity." ;-) glad you got to witness this for yourself

I dunno, Winna. I've noticed that when I am totally immersed in an experience I don't even realize I am hot, sweaty, bug-bit, being rained on, whatever. Maybe that means I have a one-track mind...?

And yes, Janie, the diversity I encountered was indeed mind-bending. Since I read a lot, and ponder even more, I knew some of the differences I might encounter, but there's nothing like personal experience to broaden the mind and soul!

Thank you! Loved this post, especially the sketches, and the giant monkey frog, which I just had to show my husband!

Wow! It's such an amazing thing to be able to travel and draw what you see. The skull is beautiful, and the sketch with the boy and the frog. It enriches the whole experiences, because we actually see and experience the moment.

Me too, raena, that frog simply boggled my mind. I didn't realize there were frogs that didn't jump!

Tahirih, I always love it when people illustrate their writing. And I always try to find a picture of them, too, to find out who is talking. I like to give that to my readers, because that's what's important to me.