12/22
All during breakfast at Dawn on the Amazon 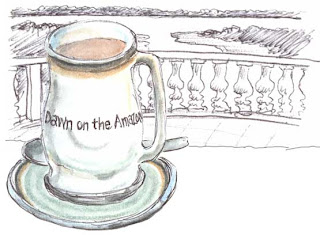 Cafe I was peering over the Boulevard balustrade at the Amazon River along the horizon, eagerly anticipating the next step in my Big Adventure.

By nine thirty, Osmar had winkled me out of my hostel room and we were aboard the Otorongo launch and well out into the 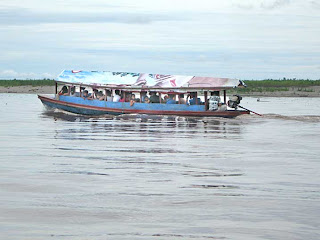 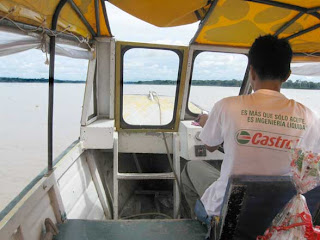 Iquitos, plus smaller boats bringing in produce and fish to Belen Market.

Behind the water taxi you can see the big sand bar that is growing opposite Iquitos ~ it doesn't yet have trees on it, and the people plant crops on its rich soil. 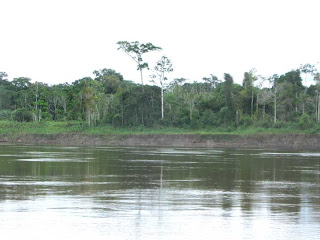 The water appeared to be barely moving, but later I discovered that this was because we were moving so fast right along with it. Mostly it was clear of debris, smooth and with jungle along the edge. Many places had steep cutbanks as much as 30' high, sometimes showing raw edges where a big chunk of the bank had fallen off into the river.

Occasionally we had to maneuver and dodge through a morass of branches, water plants, logs, and debri. A few 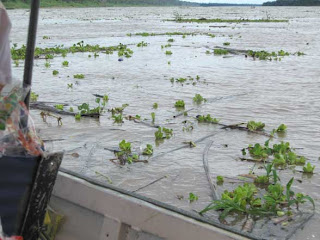 times our boat driver had to stop and back up in order to disengage from a collection of junk, but amazingly enough he avoided damage to the boat. I later decided that each debris-filled area was probably 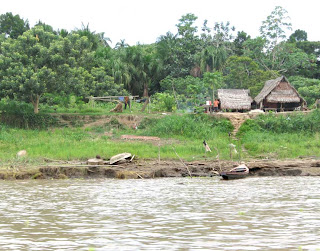 a pulse of water and debris swept down from the Andes into the river by a storm. It all stayed together because it was all traveling at the same speed.

At regular intervals along our way we saw little farms 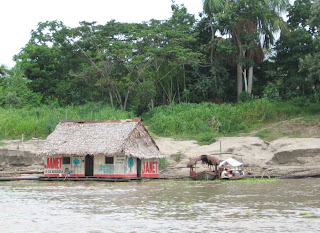 and thatched houses and an occasional "gas station" like the one in the image at right. There were also tugboats pushing or pulling loads of logs, and big petroleum barges, plus an occasional waterbus ~ a big double or triple-decker filled to overflowing with people 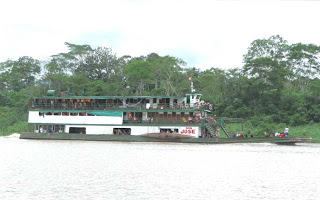 and their possessions traveling from one point to another on the river. If you peer into the lowest level of this one, you can see hammocks strung side by side where people sleep during overnight passages. I'll show a waterbus in more detail in a later blog.

Also at intervals there were people fishing with nets from small boats or dugout canoes in the submerged reeds close to the shore. 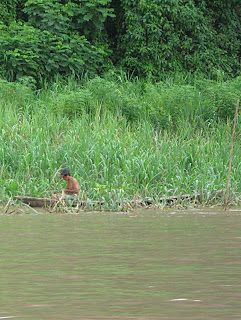 The small oar-powered boats tend to stay very close to shore where the water eddies upstream, to avoid getting swept away into the big current where they'd have a hard time getting back to shore.

I was entranced during the entire trip, unable to believe my good fortune in finally seeing this fabled river of my childhood (and adult!) dreams. I just couldn't get enough of it. 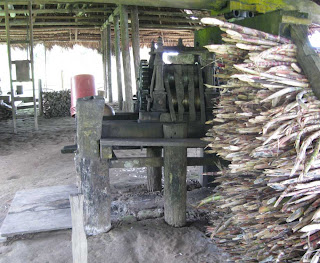 hours into our journey, the boatman pulled the boat to shore. Osmar explained that we were stopping to visit a sugarcane rum distillery. The eroded bank was very high where we stopped, but a plank crossed by small boards made what Osmar called an Inca Ladder, and we clambered up it to the top and walked across a grassy field to a low, thatch-covered shed. Inside were piles of sugarcane next to a grinder with crushing gears turned by horses pulling a long pole 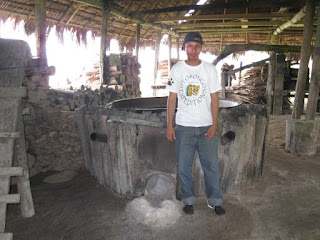 in a circle (the horses weren't working at that moment). Nearby, a huge copper basin was used for boiling the sugar juice down to molasses (by building a fire underneath), and further down the shed an assortment of pots and coils produced the rum from heated juice. It was like a scene one might have experienced in the 50s in Appalachia, and I found it really exciting to take this short step into a long-ago time. Osmar (standing in front of the molasses 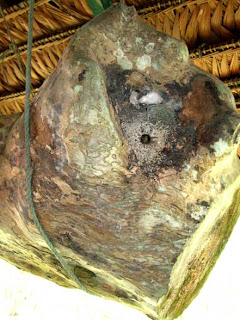 cauldron here) seemed surprised to learn that my dad used horses for such things on the farm when I was a little girl. I don't think it fit his idea of an American tourist. We had a lot to learn from each other!

After a short walk past the cane fields to the rum distillers house/store, we tasted several of his bottled products: straight rum, rum sweetened with molasses; rum sweetened with honey (from the log behive at left hanging from the roof ~ see the hive entrance hole at center?), and a Peruvian equivalent of Viagra, Seven Root Rum (or something like that) with various encouraging herb/root distillations in it. 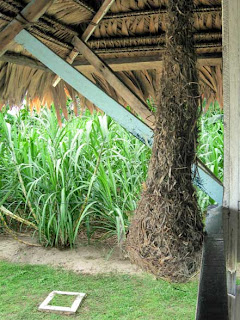 We also sampled the molasses and the honey, which is far more liquid than honey from American bees. In fact, it is so liquid they can extract it from the hive shown here with hypodermic needles. 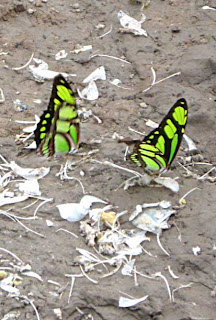 admiring a hanging oropendula nest on display in the store (it's in the image at right, with the sugarcane field behind it) I bought a bottle of the molasses for Otorongo, and we were on our way after admiring some gorgeous butterflies on the riverbank.

Soon the boatman was turning into a waterway coming in from the left bank ~ Oran River at last! After a short, winding way, we were docking at the Otorongo pier, right next to a long, narrow plank boat and 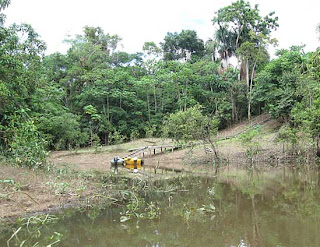 Waiting at the top of the long, sloping boardwalk were Antony and the staff of Otorongo, a warm, cheerful welcoming committee to greet us after our three-hour 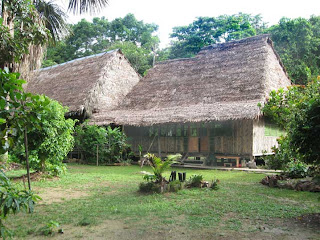 After a short walk through some open trees and along a landscaped path, the view opened out into an amazing scene: thatch-roofed Otorongo Lodge nestled among the palms and jungle trees, cozy and inviting. We had arrived!

In the common room Osmar 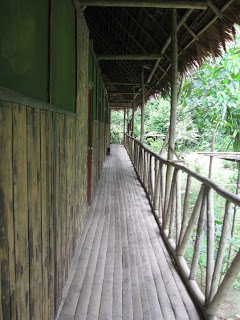 introduced me to the staff, mentioned the serving times for meals, and pointed out the library for looking up bird and lizard sightings, etc., and an introduced me to Tio Juan, the toucan. Then he guided me down a long covered deck to Room 11, which would be my center of operations while at 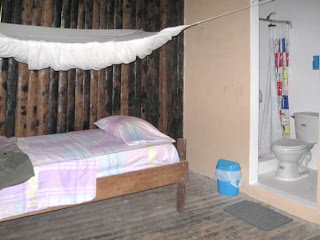 My room was simply furnished, with a single bed beneath a mosquito netting, a table, and an open armoir with a place to hang clothes and lots of shelves which I would manage to fill during my stay with all of my belongings to keep them dry ~ the air was so humid that leaving anything 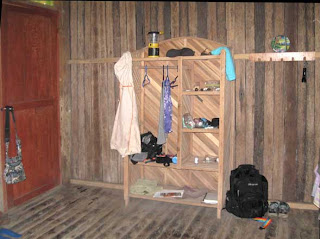 in my bags would have encouraged mold. In fact, where one of my bags rested against the floor during my 8-day stay, a moldy white patch appeared and could have done some damage if left much longer. I really liked my cozy room. I took a little nap.

At around four, Osmar suggested that we take a walk in the jungle to try to find 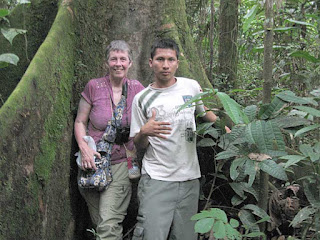 monkeys. Here we are next to a buttressed fig tree, shortly before we found the pygmy marmoset monkeys gnawing away on the bole of a tall tree then licking up the sap that dribbled from the wounds they had made. The waning light made it way too dark to take photographs, but they were neat to watch. We also saw, fleetingly, saddle-backed tamarin monkeys.

I sat for a few minutes to sketch a fleshy flower that would be too fragile to take back to sketch later, and as we went along I picked up seedpods and interesting things I wanted to draw.

Dinner in the kerosene-lit dining room was excellent, but I was so tired I was in 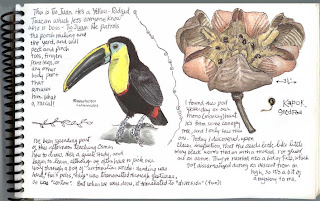 something of a daze, and went straight to bed directly after.

Here's a page from the next day's journal with Tio Juan and one of the seedpods I collected the afternoon before.
Posted by Irene Brady at 1:13 PM

Thanks for this article, pretty helpful piece of writing.