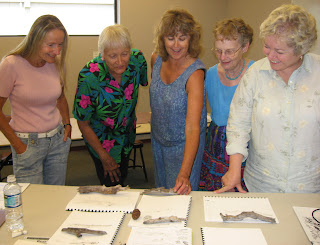 On three weekends in July and August (3 sessions), I had a remarkable group of workshop students. They looked rather ordinary and most of them claimed that they didn't have a clue about drawing, but by the time we had finished the workshop, all six women had convinced me that they were extraordinary.

There were only six of them -- in the summer it can be hard to fill classes here because we have a rather small area to draw from ('scuse the pun!) and I've given this workshop here several times already. 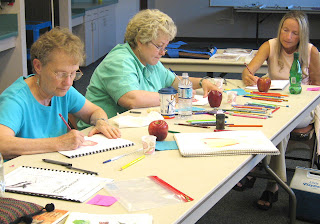 But the enthusiasm was high and they jumped right into the right-brain drawing exercises with gusto. Elise had taken the class before, and I hoped she wouldn't find it repetitive, but she reassured me that it was excellent practice for her, so I stopped worrying about it. 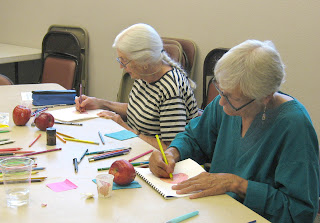 By the second session, they were gaining confidence, and the critiques were of great interest, with everyone learning from each other. In the picture at the top, each has drawn a gnarly stick, first with the stick in front of them, then immediately after, a drawing of it from memory -- the results of which caused considerable amusement.

The apples were daunting at first, but we took it step by step, and soon the ghosts of apples were appearing on the paper as they first laid down a yellow wash, wet it then dried it, then started applying the various reds, purples, greens and yellows close examination revealed on those supposedly red apples. At left below, pencil is scribbled on -- below right, water is painted over the pencil, and the watercolor pencil marks blend and spread into what looks very much like a watercolor painting. 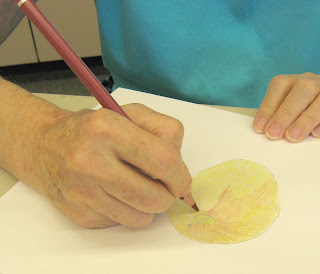 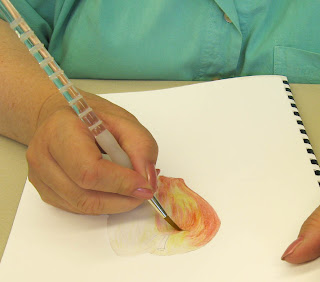 More pencil and more water can be applied until the desired intensity is reached, although too many washes may buckle the paper.

Soon, the drawings were looking good enough to eat, and the ladies were rightly pleased with their results.
Below is each student with her masterpiece. 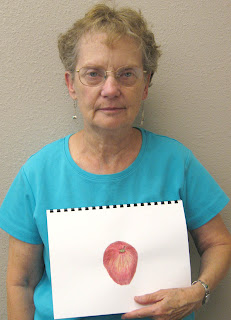 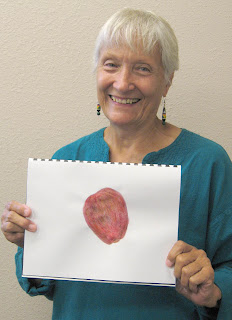 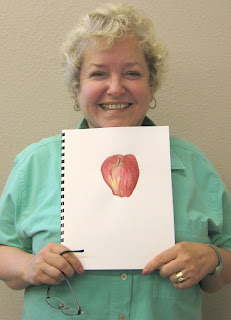 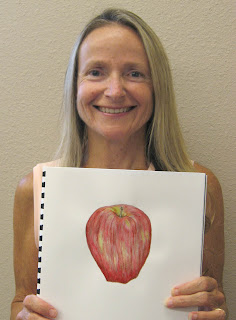 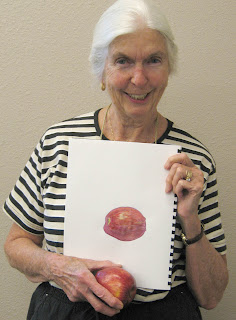 In order of appearance, the apple artists are: Carol C., Elise L., Leslie L., Marta D. and Mary Lou L., They all gave me permission to include them here. Cathleen K., who is in the center of the critique photo at top, couldn't make it to the third session, but I'm positive her apple would have been as high quality as the rest.

Here are the apples close-up -- click on the picture to see them even better.
Posted by Irene Brady at 11:34 AM 2 comments:

Finally! I finished the workbooks for my sketching/journaling workshop (the weekend of September 15 and 16, and the following Thursday night, September 20), not an easy task with my scanner driver in the ditch. When I create a journal I like to scan in drawings and other goodies from my journals and sketchbooks -- but for this one I had to rely on files I already had scanned in. 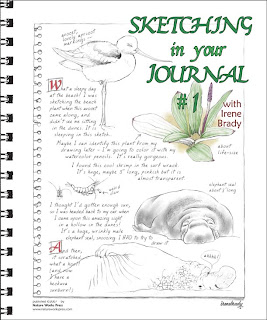 Actually, I'm really pleased with the results, so it's no big deal.

My friend Cathy Egelston, also an artist, instructor and journaler, took the workbooks and tried out the course. She says the workshop's almost there -- pointing out places where I could bolster faltering confidence in would-be journalers if needed, and suggesting changes that would make the process easier. I didn't leave enough room for the calligraphy sample on the workbook page, for instance, and it was hard for her to try out the lettering with the calligraphy pen in the cramped space. Good to know!

It's always important to vet a workshop before giving it for the first time. I've given workshops cold, without running them past a "reviewer," but it's scary and I always notice things during the workshop that I might have approached differently. I would have been pretty vexed with myself during this workshop, for instance, as I watched students struggle with the calligraphy sample. It's of paramount importance to me to give people MORE than they expect for their money.

Now I'll go back into the workbook files, which I've been setting up in InDesign (an excellent program, by the way, but it requires a rather steep initial learning process), and make the fixes Cathy suggested. Then I can convert the workbooks to .pdf files and upload them to my brother David's printing company server (aren't I lucky?) and in a week or so I'll receive the workbooks via FedEx or UPS, gorgeous and ready to go.

Cathy and I did some impromptu journal sketching yesterday -- we went to The Black Sheep, a pub in Ashland (Oregon) just down the road, and sketched the musicians jamming Irish music -- an every-Sunday event. If I ever get that dang scanner going again, I'll upload my sketches of the harpist, mandolin, fiddle and other players.

It was deeply satisfying to be immersed in the lively music while sketching. I was working in ball-point pen, my Guinness Stout on the dark wooden table beside me, while Cathy concentrated on pencil as she sipped her tea. One of the musicians beckoned us over as we were packing up to leave (on our way to the swimming hole, complete with knotted rope swing for a plunge into the waters of the Ashland reservoir), and admired the sketches. What fun!

That sketching, now that I've planned the workshop, will serve as a bit of fodder for schemes to encourage and invigorate my students-to-be. I've been so busy recently that I've had little time to indulge in my favorite pastime, and now I need to work on my own journal pages to demonstrate techniques I've been touting in my workbooks.

By the way, I just completed the final session of my nature sketching workshop last Sunday. It was a wonderful group of gung-ho students, and we had great fun. I'll talk more about them next blog.

Until next blog, then!