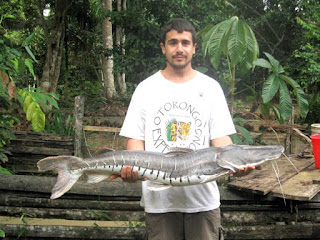 Otorongo ~ and still so many things not yet experienced. Time to rectify THAT!

The first "experience" of the morning was a gigantic catfish being prepared for the kitchen by our host, Anthony, here 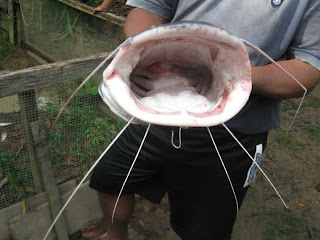 holding a typical Amazon River Catfish which he subsequently filleted for our breakfast. This one catfish provided plenty of food for us all. One can easily imagine that giant mouth vacuuming up everything in the vicinity as it cruises along the bottom mud of the Amazon! Be sure to appreciate the beautiful markings on this big fish. 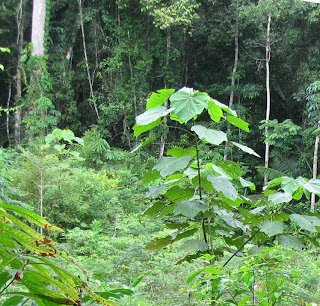 Osmar that today I wanted to explore the jungle to the north of the lodge. We had made a quick tour in that direction the day I arrived, but it had soon gotten dark and I now wanted to see it in daytime. 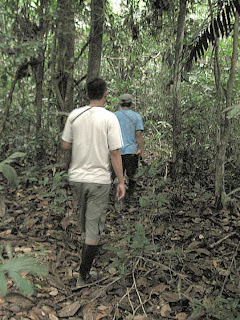 Besides, that first hike was MUCH too fast for me since we were hiking with the purpose of getting to the trees inhabited by the pygmy marmosets. This time I wanted to go at my own pace, stopping to look at and appreciate things encountered along the trail. Osmar had told me there was a high hill back there, and I was eager to see 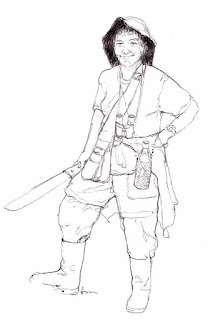 So, decorated like a Christmas tree with my sketching bag, my binoculars, my string water carrier containing about a pint of water, and with my light-weight rain poncho (with sleeves tied about my waist since it was warm and relatively dry but I wanted it Just In Case), we started out.

I loved our "slow" hike. We headed out through the palm orchard, and soon were walking along a new trail. I asked Osmar to take my picture, and he insisted that I pose with the machete ~ and I'm glad he did. Here is my favorite self-portrait ever, drawn from that photo, entitled "Lean Irene, the Jungle Queen" (stop your giggling!).

Here are some of the things we encountered on our slow hike:
1. 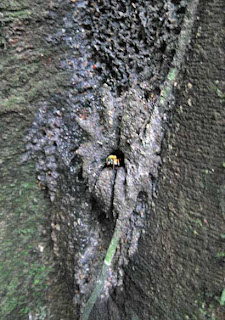 a bee tree with a bee just emerging from the hole. I don't know how they create that "starburst" effect around the hole, but it looked like the one I saw on the bee nests at the rum distillery. I wonder if it's made of wax. I DIDN'T touch it to see! 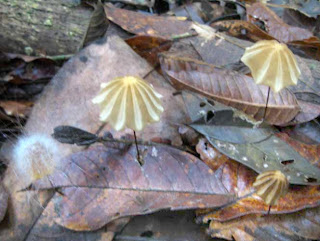 lots of mushrooms, including these little umbrella-types that looked as though they should be stuck into a tropical drink. One of them, though, had been overwhelmed by a fungus, and looked more like dandelion fluff. 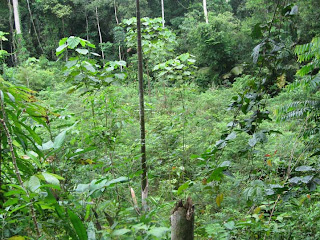 an abandoned cassava farm tucked away in the jungle. This is an example of typical slash-and-burn agriculture, well on its way to becoming jungle again as light-loving seeds take root in the sun-bright opening. I wouldn't have realized this is an abandoned farm if Osmar hadn't told me. Very likely it was left to return to jungle when the cassava crops waned in productivity as the available nutrients were extracted from the soil. 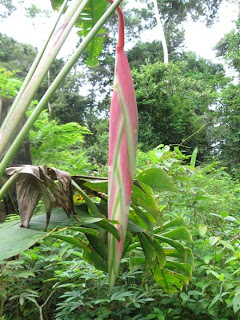 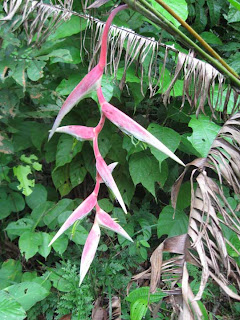 4. these lovely pink and green buds and "flowers" look like bird-of-paradise blooms. I don't know whether they are actually of the same species, but I can envision the first one growing and elongating into the second, and they were near each other. Aren't they lovely? 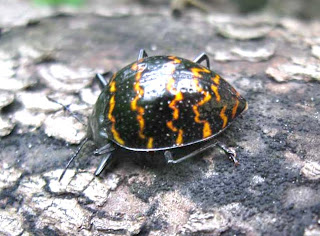 5. This striking orange and black beetle, about half an inch long, was ambling across a log when I spotted it. I've no idea what kind it is. 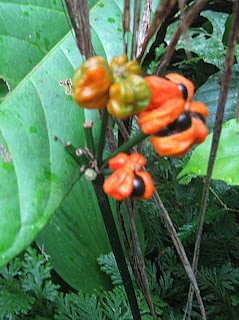 The shiny black seeds in their fleshy red coats at left illustrate a perpetual problem in the jungle ~ trying to get sharp, clear photos in dim settings without using a flash. In my opinion, flash-lit photos look fakey with their black backgrounds, so I compromise by trying to hold the camera steady for natural-light photos. If I were alone, I would

just work at it until I got a sharp image, but with a companion, even a guide, I felt constrained to "get on with it," so I didn't take time to get a sharp photo (gotta work on this attitude). Of course, I could use a tripod, but I hate carrying the extra weight. So you might call this image "soft-focus" if you feel generous. Otherwise, you can just say it's blurry. Sigh....

7. I was really pleased to spy this cicada, pressed close to a stem for camouflage. Its dark coloring works well to make it nearly invisible in the dim light. I had to do some fancy dodging in Photoshop to make it show up at all, which is why 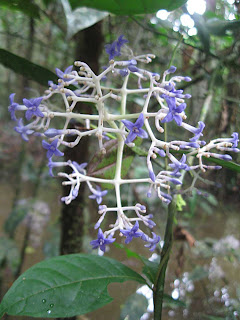 the forest behind it looks so washed out.

8. This purple bloom at left is on a shrub growing in one of the swampy areas near the lodge. Anthony had showed it to me a few days before, and now Osmar led me to it so I could photograph it. It's a tall, 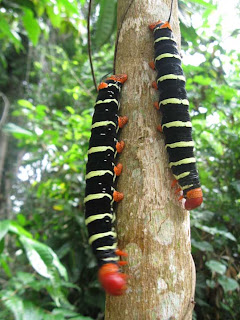 open shrub, and the flowers are an exquisite purple with interesting form. I can't remember what Anthony said it is, but I am properly impressed. Be sure to look at the blooms close-up!

9. Our final treasures appeared as we came back through the open orchard ~ these huge caterpillars all over a couple of trees, maybe fifteen of them in all. The head of the left one is blurred because when I'd get close they'd all started wagging their heads as a defensive measure. They're fully as big as my index finger, and about 4" long.

And that is my show-and-tell for my Jungle Queen Trek.

Lunch was being served 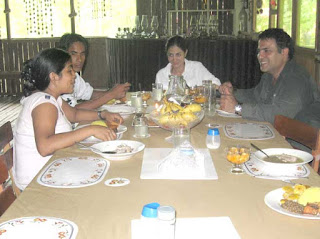 up early to Ivy (at left), two guests, and their guide, Walter, second from left, all of whom who were catching the boat back to Iquitos ~ as we would the next day. Ivy spends much of her time greeting and shepherding guests in Iquitos, so she treasures her intervals at Otorongo.

Behold the bowl of bananas on the table. I managed to gobble up at least one and sometimes two or three of these little delights with every meal. Fat, sweet, and about 4" long, they are among the best I've ever eaten (El Remanso also offers wonderful little bananas like this. Wish we could get them here in the US!).

My afternoon was spent sketching the many things I had picked up during the week: 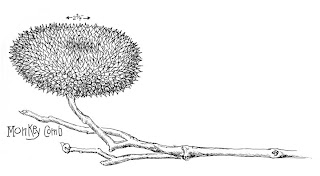 seedpods, feathers and other curiosities; and adding color to pages of my journal while I still had the memories fresh in my mind. Figuring out how to draw this Monkey Comb had kept me stymied for days, but now I had to either draw it or toss it over the veranda since it was beginning to show a bit of mold. The drawing came out fairly well, considering.

[if you saw yesterday's blog during the first hour after I published it, you may have seen parts of this next section there ~ I got my days confused.]
At about 3pm I met up with Osmar for a final sketching session with the Ornate Hawk Eagle and the Harpy Eagle in the yard. Both are rehab birds (one of them is blind in one eye). They 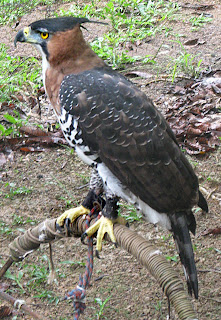 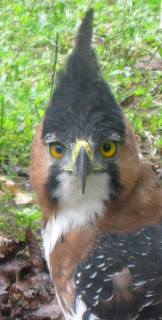 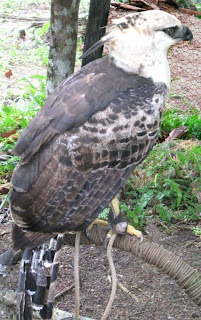 are absolutely gorgeous. This session was mostly for Osmar's benefit, although I continued finishing up some painting in my journal. He had really wanted to draw the birds, but I knew he wasn't ready and would require some intensive coaching on pen techniques to learn how to show texture and shading.

With such an intense and eager student, teaching is a pleasure, and I was glad to spend some time helping him hone his skills. We worked together for a couple of hours.

At right is Osmar 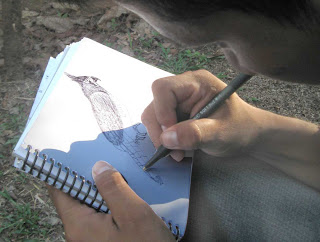 at work on his drawing, and below that is a larger image I managed to extract off the upper image to show how nicely he was doing. Osmar says he had never drawn before, so this is his fifth or sixth drawing ever. Not bad, huh? He spent more time on it after this, and made it even better, but I'm sorry to say I didn't get any more photos. 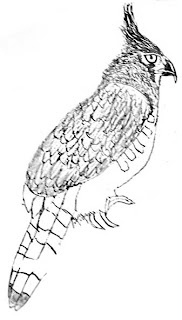 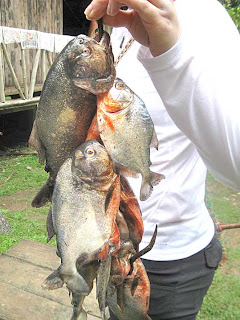 shared them with us). They were actually quite tasty, and it seemed a fitting fate for a fish with such a dire reputation. Actually, that bad reputation (reducing a cow to a skeleton in five minutes) is a bit inflated, although if you catch one and flop it into the boat, you'd better watch out for your toes. I nibbled at one's head until I had excavated an entire jawbone complete with teeth ~ quite a little chopping tool! (Don't tell anyone, but I brought it home in a bottle.)

As a parting gift, the guides took us out after dinner for a starlit drift on the Amazon. Motoring upriver for about a mile, they turned the boats around and we drifted in the warm, moist air under the incredibly bright and numerous stars (if you live in a city, you'll NEVER see stars like this!) past the mouth of the Oran, then Oran village. Rock music was drifting out from the futbol court speakers, and the light on the bluff shone brightly, but just as we came even with the village the generator cut off for the night and the light and sound blinked out. Stillness and darkness enveloped us as we floated under the firmament, punctuated by 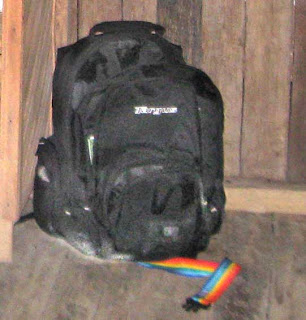 the frog and cricket orchestra onshore. It was a memorable experience.

In my room that night I began to pack up to go. Where my backpack had rested on the floor for a week was a large white patch of mold (obviously I didn't pay attention to details ~ see at left) which I brushed off as best I could. Into the bags went everything except my clothes, damp as always. I would wait until the very last moment to pack those, hoping to get them home before they turned to smelly slime.

I went to sleep trying to memorize the croaks, cheeps, whines and buzzes, and the light flutter of bat wings above the netted ceiling. Tomorrow would be the last day.
Posted by Irene Brady at 7:34 PM