Christmas Eve
I was getting behind on my sketching and 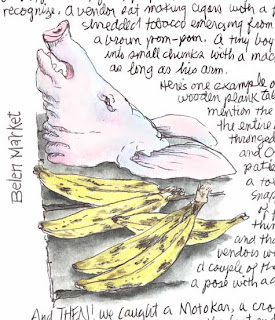 painting, so I was up at dawn on this Christmas Eve day to work (play, actually!) in my sketchbook. Quietly, quietly I tiptoed to the hammock room in the gathering morning light and settled down into a hammock. I needed to paint (with watercolor pencils) the drawing of the children in the boat which I'd penned the day before, and I also wanted to finish some other pages that had no color yet.

Later one of the other guests came in, and after 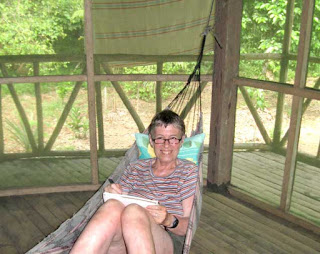 looking over my journal she took a photo of me sketching in the hammock. Throughout my eight-day stay, everyone was so curious about my progress in the journal that I got into the habit of just passing it around every now and then (OMG, that sounds egotistic!)(oh well, that's what I did, anyway...)

You can see how peaceful the hammock room is. Behind me in the photo is someone's towel drying outside on the line strung all the way around the building. Most of the guests used it every day in an effort to keep fresh. After every hike, clothes 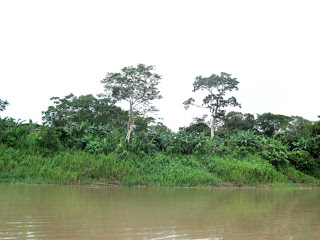 were hung on the line outside our rooms to dry and air.

Right after breakfast Osmar and I and a boatman from Oran village took a motor boat across the Amazon to find a place where we could see hoatzins, amazing birds that live along the rivers and swampy areas of the Amazon. 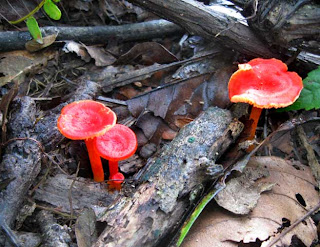 boat up below the bank and walked through a forest that is usually underwater ~ you could see the waterline about 12 feet up on the trunks of the trees. I kept marveling at the thought. The earth was muddy but covered with leaves, sticks, and detritus, and there were 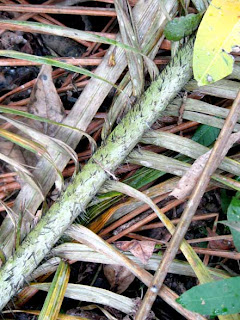 gorgeous white, grey and red mushrooms all along the trail. I had to be careful not to brush against the spiny palms that flanked the trail.

Soon the forest opened out upon an emerald green swamp covered with water-lettuce. The boatman, now our machete-wielder, pointed out the tall fig trees at the far end that often serve as a gathering place 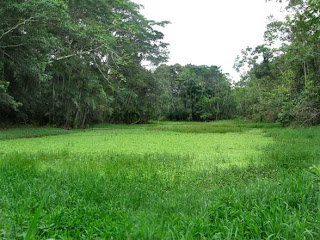 for hoatzins. We skirted the swamp and followed the shoreline through the woods, gradually becoming aware of raucous shrieks and crackling twigs from the jostling of large bodies in the tops of the fig trees.

Osmar motioned for me to move quietly, and we crept up under the fig trees. The hoatzins overhead were difficult to see in the foliage, but I could see large shapes, an occasional accusing red eye in a blue face peering down at us, and 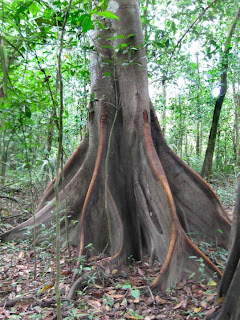 the messy, "bad-hair-day" topknots of the suspicious birds. It was pointless to take a picture, but through the binoculars 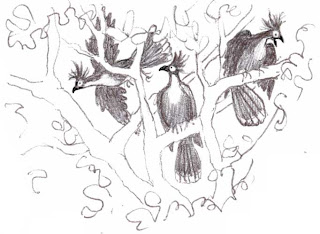 I got lots of good looks at parts of hoatzins, and I was delighted. I'd been curious about them ever since I'd had to research and illustrate one for a book many years ago. 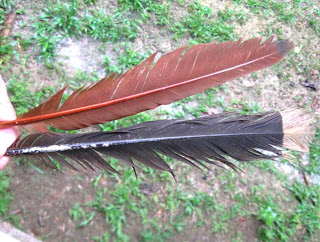 out of the tops of the fig trees and were off to a nearby grove well out of sight. I burst out laughing at the great to-do and wished we could follow them, but we'd probably not get a better sight of them now that they'd gotten the wind up, so we started back. As we left their fig tree grove, I was ecstatic to find a pair of hoatzin feathers, 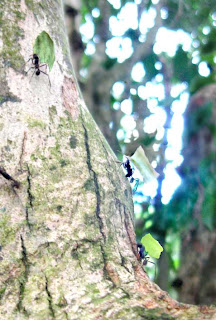 one of the black tail feathers and a cinnamon-red wing feather. What sketching treasures!

Stopping to photograph a trail of leafcutter ants on a tree, my camera batteries pooped out on me ~ they were rechargeable, but I'd not thought to give them to Anthony for recharging. Since Otorongo doesn't use electricity, they must be sent to Oran Village overnight to plug into the village generator, which only runs for four hours each evening. You have to plan ahead. Fortunately, I had the extra batteries I'd bought in Iquitos as back-up, so after I returned to the lodge I could bring my camera back to life. 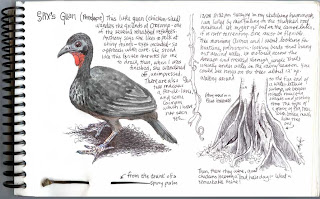 After lunch I explored around the lodge, sketching Penelope the Spix's Guan (see the journal page) and the tarantula in the top of the pineapple plant, then settling down in a hammock to color the guan, journal the morning's adventures and draw the hoatzins' fig tree. 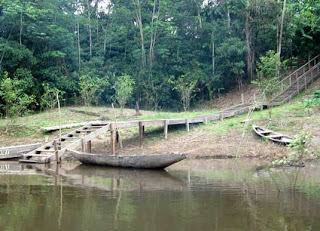 afternoon cooled, Osmar and I went down to the Otorongo dock and climbed into the dugout canoe to explore up the Oran River which runs past the lodge. 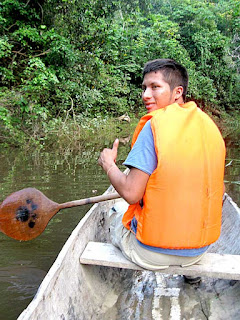 Oran River at this time of year is slow and lazy, more like a deep creek than a river, and it was easy for us to paddle upstream to do some quiet birdwatching. Osmar has been up the Oran many times, and pointed out hawks, vultures, and smaller birds I had to look up in the bird guide we'd brought along (A Field Guide to the Birds of Peru). 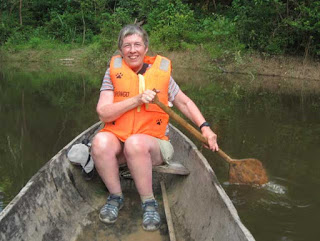 My best sighting was a Black-tailed Tityra, Tityra cayana, which is about the size of a robin, a pure white bird with black wings and tail, a black cap and bill tip, and a red eye-ring and base of bill. A VERY striking bird. We also watched an overnbird building its nest, although we thought it might be picking termites out of a termite nest as it poked and prodded at the edge of the muddy perimeter. I looked it up when we got back. 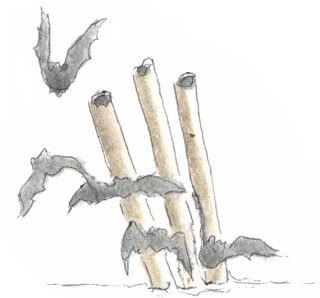 the silence of the dugout, and paddling with the graceful, pointed paddle (see the picture). At one point we approached three submerged tree limbs poking up out of the water. Just as we passed, a cloud of bats emerged from the hollow ends and fluttered past our 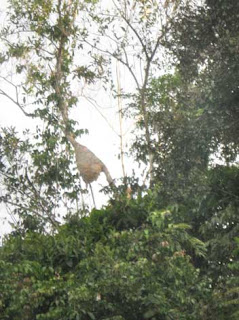 faces. It was extraordinary to feel the flutter of their wings past our cheeks (later I tried to draw my impression in the journal).

On our way back down the Oran, we spotted this ants' nest glued to the trunk of a tree, as a huge flock of canary-winged parakeets chittered overhead to land in a tree along the river. Amazingly, once they landed they were next to invisible.

On a whim, I asked Osmar We had to hang onto the bank to keep from drifting out into the current, but it was a nice sunset, made even more dramatic by the passing of a boat in silhouette. 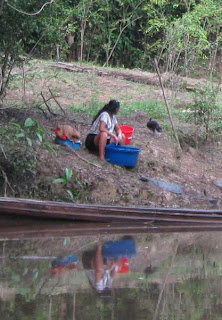 m the lodge doing my laundry on the bank of the Oran (accompanied by Penelope the guan). Some of the people from Oran Village work with Otorongo lodge to take the guides and guests to interesting spots in the jungle, to serve as boatmen and machete wielders, and to do, among other things, the cooking, landscaping, carpentry, laundry and keep the rooms made-up. It appears to be a good situation for all concerned.

I was impressed with the care the staff took with us ~ they were always on the lookout for interesting things to show us (birds, frogs, monkeys and sloths, etc.), and as boatmen, they would slow or stop the boat if a guest flung up binoculars or a camera to get a bead on something.

The Peruvians have more of a celebration on Christmas Eve than on Christmas Day. Since guests coming to the lodge may be of various religions, the holiday is very low key. But to celebrate the event the cooks brought in loaves of panatone (a light fruitcake) and after dinner we opened a bottle of rum from the sugar cane distillery and toasted one another and our Amazon adventure with high spirits. It had been another good day at Otorongo Lodge.
Posted by Irene Brady at 1:34 PM

Thank you for a delightful travel account. I like the mix of photographs and sketches. I would love go to Peru and see that white and black bird.

I visited your site and love your thorough species accounts -- they look exactly like the ones I kept when I was observing my bird feeders years ago. It was such fun, but the bears took out the feeders and I stopped.

You would love Peru.

Hoatzin feathers! I am SOOOO jealous. I can send you a hoatzin photo from the Madre de Dios for your sketching, if you don't mind it being from another part of Peru.

Loving your blog of Amazon adventure and most impressed with your sketches, especially the one of the base of the fig tree, with the many fanned-out buttresses. How do you keep track of the multitude of buttresses, their angles, widths, etc.? I know, experience and practice. Just asking if you have any shortcut tricks to keep such complicated images aligned properly. Looking forward to more blog posts on your trip. John

First Kate ~ I would just LOVE to show everyone a picture of a hoatzin! They are a hoot!

Then John ~ I think my best advice about doing something like the buttresses of the fig tree is to start out with the idea that it WON'T be perfectly accurate. If you scroll up and down from the photo of the buttress to the sketch, you'll see that some of it doesn't match. I just started drawing, and where it didn't match or meet (or where I wanted to make something stand out more) I just gave priority to my pen, not the photo. That frees up your brain from the "gotta-gettit-right" freeze-up, and when you relax it is lots easier to do. Also, keep your eyes going up and down between picture and subject. If you focus just on the drawing it will start to go awry immediately. Hope that helps!

Thanks, Irene. I have to get better at losing the need for perfection. John B

Sure, John. I know it's made my life a whole lot easier since i figured it out! And nobody seemed to notice stuff wasn't 'perfect' anymore anyway (that was kind of humbling)!