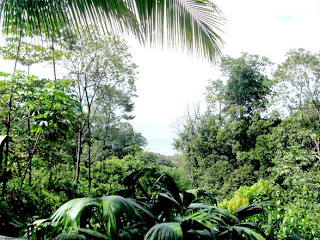 Adri and Dani had to work hard to carve out some time to talk with me about the map and trail guide art they want me to do for El Remanso, taken from my journal entries. I am really excited about the project, and have a bunch of ideas for it ~ after I finish blogging my trip.

December 20th was my last day at El Remanso, and it started out with more unseasonal rains ~ global warming has made the weather just about anywhere on earth unpredictable 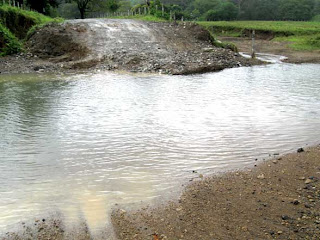 these days. In fact, it had rained so hard one day that week that vehicles couldn't ford one of the rivers between Puerto Jimenez and El Remanso, and guests had to wade across in water up to their thighs to catch a ride on the the lodge side (with a terrific vacation tale to tell when they got home).

I just hoped I would get out in time to catch my plane. As it happened, the rain tapered off and there was no problem. Alternate plans had been to leave early and have a taxi pick me up on the other side if there were a problem. I had dressed this last morning in my prettiest underwear in case I should have occasion to wade. I really didn't want to fly to Peru in wet pants!.

caught my plane in San José that evening, and flew to Colombia where we were offloaded onto a bus, trotted through the airport, then onto another bus which took us to our next plane ~ a finely orchestrated minuet of people-moving. I had a long layover in Lima in the middle of the night, and I was DELIGHTED with my new hoodie rain jacket which pulled down over my eyes and my blankie-cum-throw which opened out into a nice warm cover so that I could sleep on three chairs in the brightly lit Lima airport (in the photo at left, taken at home, I have unfolded it to show how big it is. Perfect.). 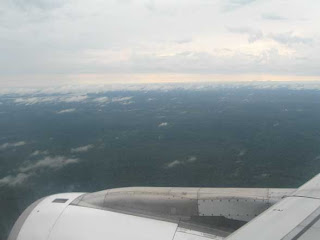 Next time, I swear I will shedule my flights better so that I cross over land portions in daylight. What a waste of good sight-seeing to travel the red-eye flights in the dark, even if it is cheaper. I mean, I didn't even SEE the Andes! Here's my first sight of the Amazon, coming down into Iquitos shortly after dawn.

I was met by Ivy (pronounced "Evie") from Otorongo Lodge at the Iquitos airport, and after checking into my digs at Hospedaje "La Pascana" and pausing with Ivy for a cup of excellent coffee and a lovely long chat at Dawn on 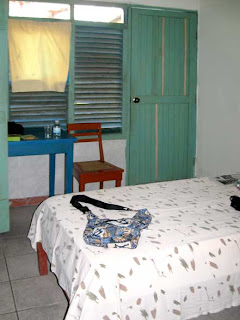 the Amazon Cafe overlooking the Amazon River, I was whirled into my Amazon adventure.

Ivy introduced me to Osmar, who would be my guide during my entire Amazon stay. We looked each other over. Osmar must have seen a middle-aged (or over) gringo woman with a big smile. I saw a Peruvian boy-man about my size with clear eyes and a shy smile. We shook hands with a "Mucho gusto" greeting, and Ivy sent us down to the bank so I could convert my cash to make the final payment for my tour with Otorongo Lodge.

changing my American dollars to Peruvian nuevos soles, I discovered to my dismay that an American bill with even the slightest tear or wear is not considered legal tender ~ even at a state bank (take a look at this useless $100 bill). So, $100 poorer, since I couldn't use it, we stopped by the Otorongo office to take care of business, then we took off on foot to visit the 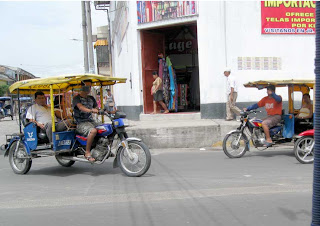 famous Belén Market at the south end of town.

Iquitos is a fantastic place! The sights, the sounds, and the aromas of life swept around me in a rush of people and motokars, the major form of transportation in this river town without any roads to the outside world. Then we reached the market, which, when the water is high, is navigated by canoe. This wasn't high water season, so we didn't have that pleasure. But it was amazing anyway. 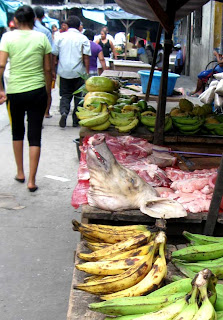 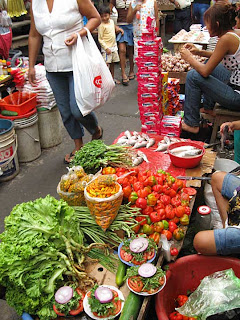 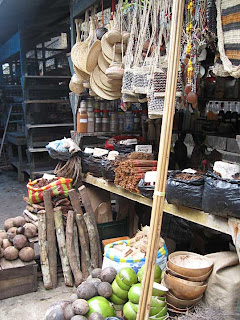 busy since people were buying Christmas presents, and it was indeed aswirl with people and an incredible variety of things, from dishes and fancy clothing to bananas and pig heads (I almost got sideswiped by a passing pig-half slung over a burly man's shoulder~ Osmar pulled me out of the way). You could buy anything here: food ~ either raw or prepared on plates, dried gourd halves (to hold anything from soup to, well, whatever you'd want to put into a gourd), to powdered bark in cellophane bags for headaches, to lively armored catfish for dinner. And a million things in 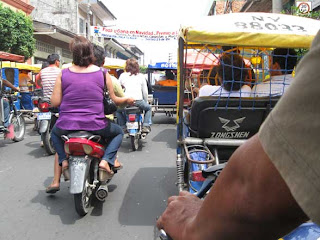 I really wanted to ride in one of those motokars, so Osmar suggested a trip to Pilpintuwasi, the Butterfly Farm & Amazon Animal Orphanage. The motokar trip was a wild ride, sometimes three-abreast on a two-way street, but with courtesy and skill on the part of the drivers. There were also motorcycles for hire, and the occasional car, truck or bus in the mix. I didn't see a single accident, but 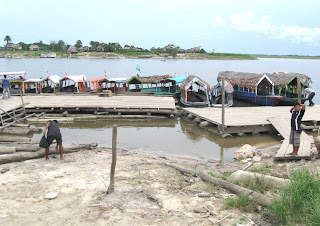 the diesel fumes were pretty potent.

In the marina at the north end of town we hired a peka-peka (a thatch-roofed boat with a motor that goes "peka-peka-peka" ~ at the dock in the image above) to take us up the Nanay River to the Butterfly Farm landing ~ a pleasant ten-minute ride ~ and at the landing we caught another motokar up to the farm. They raise butterflies there for release, and we were shown eggs, caterpillars, pupae and recently hatched butterflies.

Here are some scenes from there, and I hope you'll excuse my fuzzy photo of the pink uakari monkey ~ 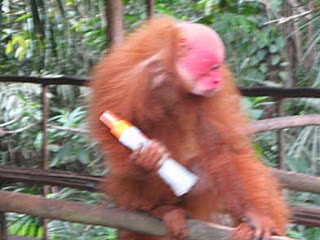 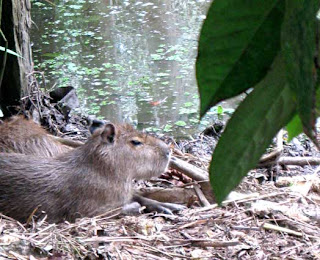 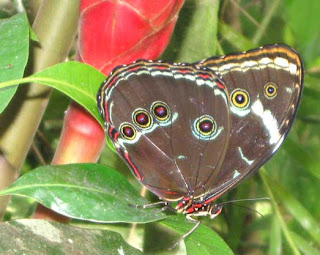 was running free and grabbing things, like that mosquito repellent bottle in its hand, from the visitors, and we were not interested in sticking around to be vandalized! Osmar was responsible for seeing that I remained in one piece, a responsibility he took very seriously. BTW, that's a capybara in the center picture, a rodent the size of a spaniel. After an hour or two, we hailed a motokar to return to Iquitos. 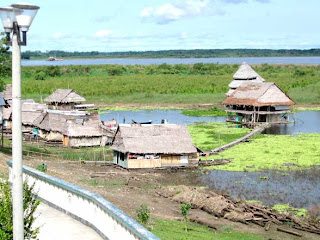 and I started to get acquainted on our motokar rides, exchanging information and Osmar pointing out interesting things to me and sharing his knowledge of Iquitos. He showed me the street up which his family lives, and with his fair English and my poor Spanish I think we managed to understand most of what we tried to say. He said he was 22 and lives at home between guiding stints at Otorongo Lodge, where we'd head the next morning.

Now he delivered me to my room at La Pascana, and I went back out by myself onto the Boulevard above the Amazon to 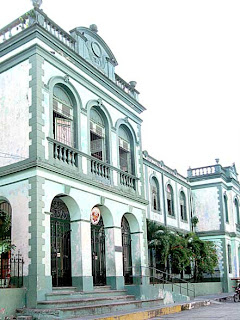 see the sights for the afternoon and evening. It was a great experience, and I met and talked with vendors and people I met on the street, bought a macrame bottle holder for 6 nuevos soles (the equivalent of $2), purchased some spare batteries and a snack in 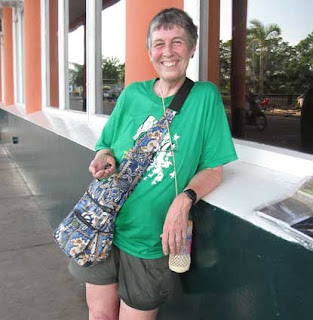 a corner store, admired the colonial architecture, and ate dinner at a restaurant overlooking the Amazon. The Iquitos people are the friendliest people I have ever met. Many speak a little English, and I speak a little Spanish, and it was fun to try to make myself understood.

For instance, I was examining a large beetle I had found on the sidewalk when an Iquitos man came over and explained in fairly good English that this was edible in its pupal form, and that its larvae could be found on a nearby tree. The discussion shifted to 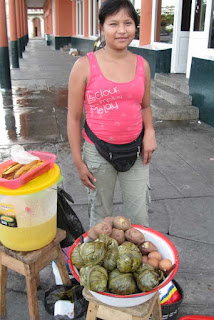 other Peruvian customs, and he showed me his portfolio which he was carrying. We must have chatted for half an hour. He took the photo of me holding the beetle, above.

Over dinner I got into conversations with an ex-pat at the next table and with an old lady vendor selling kekes (cakes) up and down the Boulevard. I had a wonderful time experimenting with the few Spanish words and phrases I know. Finally, exhausted and filled to overflowing with new sights, sounds and experiences, I walked back to my hostel and crawled into bed.

What a fine collection of experiences on my first Peruvian day!
Posted by Irene Brady at 11:10 AM

Irene, this trip sounds absolutely wonderful. I'm looking forward to seeing your marvelous sketches, and reading about the rest of the trip.

Thanks, Lynn -- I may take today off to relax, but if I do, I'll be back in the groove tomorrow.

I wish I'd had a narrative like this to read before I left. I did a LOT of research, and what I'm doing here is what I WISH I'd found before I left, so I could have made better plans (although I certainly enjoyed the results of the plans I DID make!).

Planning a trip like this is about 1/5 of the fun, I'd say. Doing it is 3/5, and sharing it with others when you get back is another good 1/5th. I just figured that out!

Oh, I wish I'd thought to warn you about the money issue. First time I went to Peru, I even IRONED my bills to make them look fresher. (Second trip I skipped that bit of overkill.) The local banks simply will not accept them, and folks (like your lodge) who do take them from tourists are stuck with them with no recourse. Glad you were able to work it out!

Hello - I am also planning a trip to the Amazon Jungle and considering this lodge. Do you have a contact for the guide or owner Ivy? Also, it appears that you had your own private guide vs. with a group. Was this easy to arrange? Thanks, Gerri