It's time to do the window dressing for my Art Show and Studio Sale on December 10-11 and you are invited! I bought some underwriting on our local NPR station. The ad goes like this (although we're supposed to say "underwriting" not "ad":


The FCC rules make it awkward ~ we wanted to say "You are invited to our Art Show..." but that's not allowed. And there can be no 'calls to action' such as "Come buy some art!" Ah well.

The actual window dressing will happen on Monday, in three days, so I spent a large part of today making sure I had everything I need to make it look good. 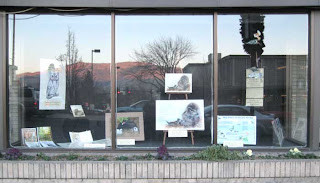 Here's what it looked like last year, and while I don't plan to change it a lot, I will improve a few things. The important thing, Monday morning, will be to have everything all together and ready to go: the art, the easel and other props, the drape to cover the step-stool (which will hold pictures), the printed signs mounted on Fome-Core, 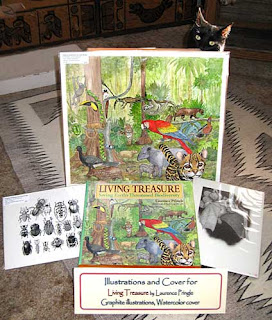 a step-ladder to help hang things, and all the little bits and pieces, like scissors, tape, etc. It's ten miles to Ashland from my house, and I don't want to have to come back for something!

So this afternoon I was pre-assembling everything from scratch to make sure I had all the stuff to put each section together. Jesse, my mischievous cat, helped immensely with advice on placement (some of which he generously tweaked into better positions for me). You can see him proudly showing off his arrangement in the photo of Living Treasure artwork, above.

Last year, I climbed up into the display window with my 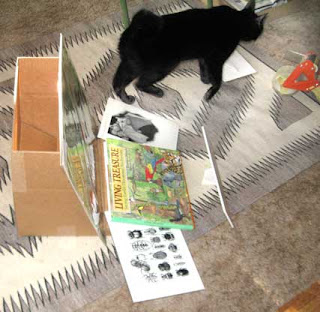 heap of artwork and gear ~ and my mind went blank. So this year I'll take a printout of the picture of the entire window. For changes I made, I assembled them and took photos. I'll take the photos with me as reference. 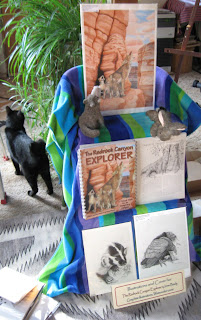 It's also important to remember how I assembled these arrangements, so I took "behind the scene's" photos to remind myself how I set them up (see above right).

The step-stool supports my Redrock Canyon Explorer cover art and some inside art as shown here. The drape is a big velour bathtowel (it actually looks pretty good).

Last year I didn't have anything for sale for less than $5. With the economy so lax I thought it might be nice to provide some little hand-constructed ornaments this year for $1.50 or $2.00 each. So I created a couple of folded octahedron ornaments, one with a chickadee, one with a scampering chipmunk, and had my brother print 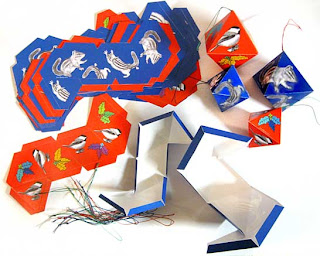 them up for me. The last many nights I have sat folding and gluing as I watched TV, actually having a nice time with it....'simple minded' perhaps..... 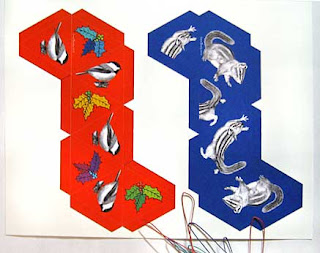 I'm not quite sure what to do about displaying them, so I thought maybe a twiggy branch might work.

It was pretty outside today, with a light layer of snow on the leaves, which looks very strange ~ I don't know why the oaks still have green/yellow leaves on the branches the first of December, but there you 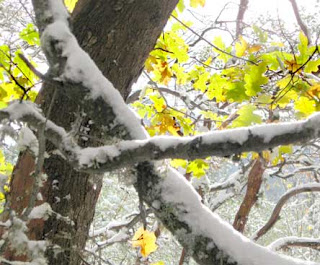 see it! And since it was nice outside I decided I'd better get out there and try to find a "tree" to hang the hand-made ornaments from.

Here's what I ended up with. It's still drying out by my wood stove, with some bonsai-type tying and tweaking to make it stand straight and persuade the branches to go 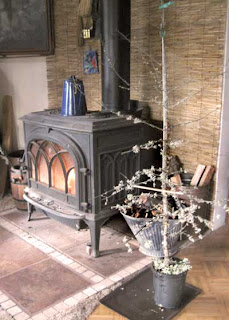 where I want. I tied the twigs to a chopstick to guide them. This a pretty poor picture, so I should tell you it's a Douglas fir seedling (dead) with lots of lichens on it. I stuck it in a flowerpot with some wet sand, and I hope it will be dry by tomorrow morning.

But Jesse is such a pill that I don't dare hang the ornaments to try it out. I could tell you tales of trashed Christmas trees in years past, but it is way too depressing to contemplate. So I will secretly hang some tomorrow, briefly, then make my decision. Outside temperatures are supposed to be in the 50s this weekend, to I'll have another chance if this doesn't light up the cockles of my heart.

It is so hard for me to concentrate on this Art Show! I am really excited about it, but I am even more excited about my trip to Costa Rica and The Amazon, which will begin just a few days after the show. Still, one thing at a time... 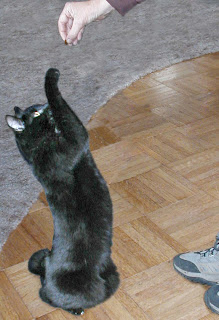 have located a marvelous house sitter, Marco, who will stay here the entire time I'm gone. I've had trouble getting/keeping housesitters because Jesse launches surprise sorties at their legs, so this time I'm putting Jesse in a kennel (his kennel room features a window with a bird feeder outside, and a separate playroom he gets to visit for an hour a day). And it's just as well, because Marco has a dog ~ looks sort of like a pit bull/lab cross to me ~ which he PROMISES me will not chew the furniture. I'm so pleased to have someone here to keep the house warm and pipes unfrozen! And he even knows how to use a woodstove. I am WAY lucky!

Here's Jesse, asking nicely for a tidbit ~ my live-in clown.

And with that, I'm back to Art Show preparations. Now that I've cleared the decks of the window dressing mess (it's all stacked in the livingroom, ready to go) I can start packing for the show itself. More later.
Posted by Irene Brady at 7:07 PM

I am still pondering your packing ideas...Got to thinking if you are worried about the ends of your sketchbook getting warped or damaged...Perhaps you could cut two short lengths of lightweight foam pipe insulation to slip on two opposite ends of the sketchbook to protect the edges from getting bumped. Pieces of pipe insulation are also great to put on the edges of framed paintings when traveling to/from art shows and sales.

Cool idea, Debo! I will look into that possibility for the sketchbook. The weight would be negligible.

And I may try it out on getting a couple of large pieces to the art show. For a large frame, a several-inch piece on the bottom edge would make it possible to rest it on the ground/floor briefly without damaging the frame.