Fiddling Around at the Black Sheep

I took some time off yesterday, it being Sunday and all, 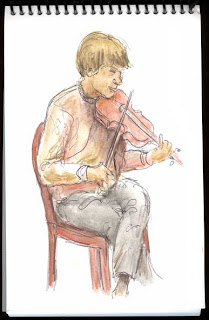 to revisit the Black Sheep Pub. I hadn't sketched the Sunday Irish musicians, Irish Jam, there for nearly a year, and I had a sketchbook I needed to try out. This blog entry may interest you if you have trouble keeping yourself supplied with sketchbooks ~ they ain't cheap.

Because I'll be making a sketch/journaling journey next month, I wanted a small sketchbook that would fit easily into my pack and reduce the weight of my usual journal (a 6 x 9, Robert Bateman Series journal with smooth, heavy paper, which I love ~ but I'm trying to keep my carry-on weight down). 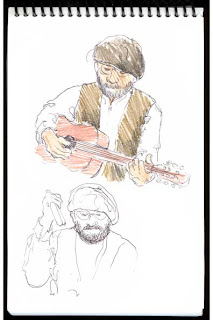 My brother David-the-printer suggested that we use the paper I had always printed my workshop workbooks on, 8½" x 11", cut in half, punched and coiled to make a 50-sheet journal. This would make the sketchbook half an inch shorter and narrower, 5½" x 8½" instead of 6"x9," and reduce the weight by a couple of ounces.

I wasn't sure the size was big enough, although I knew the paper was satisfactory for ballpoint pen and not-too-wet watercolor pencil application, so sketching at the Black Sheep 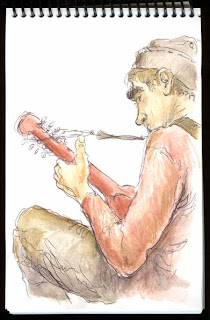 would give me a clue as to whether this would work for my trip. Besides, I haven't sketched for awhile, and you really do get out of practice.

This group, or at least, as many of them as have the time and inclination, play at the Black Sheep Pub every Sunday from 3pm to about 5:30 or so. The light isn't great, and they're in a circle, which means that the nearer ones have their backs to you and the other side of the circle is further away than I like. But the music is grand, the instruments varied, and they don't mind being sketched at all.

If you'd like to hear what they're like click here (this isn't them, but the sound is very similar). There were about twelve of them there yesterday, and I managed to sketch only five of them since the pub was packed and I couldn't see all of them very well.

I started out with just ballpoint sketches. The first two or three were stiff and lifeless, and I didn't include them here. But then the music entered my pen, the Guinness Stout started to kick in, and I began to roll. 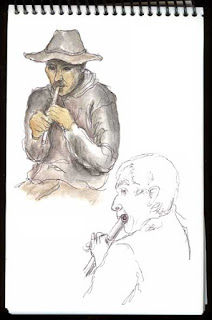 musicians move around a lot as they play. And a number of these folk play numerous instruments, depending on their mood and the music being played. So there's not much chance to do a detailed study. The drawings have to be quick and sketchy, so you must throw caution to the wind and let fly. I did most of these in pen before I got out the pencils after a couple of hours with the ballpoint pen.

A rollicking group of eight dancers started an Irish set dance next to me and were stomping and clapping and whirling (often right into me) with great abandon. I could only laugh and stomp my feet in response. In fact, I was scribbling with the watercolor pencils and painting and stomping all at the same time, which kinda bent a couple of pages on the backside of the book. Ah weel!

Notice that the best sketches are the 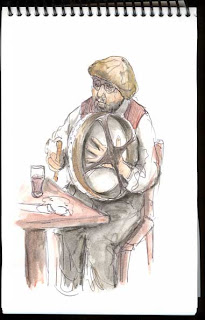 closest ones (and from the rear, because of that!). I don't know if everyone has the same response, but I've found that the closer I get to my subject, the better it turns out.

I only had six watercolor pencils with me, all shades of brown. This fits with the clothing they usually wear, the wood and leather instruments, and the dim recesses of the pub ~ besides, I wanted to try a limited palette.

These are shown roughly in the order in which I sketched them, and by the time I finished, with the sketch of the piper (below) from right behind him (I could have reached out and touched him as I sat) I was in rollicking form, scribbling wildly, smearing wetly with the brush, and singing along with the musicians (no, they didn't threaten to throw me out ~ the dancers were considerably wilder than I!).

In viewing the lot, I think I can safely say that the size of this sketchbook is usable although if weight weren't a consideration I think I'd go with my usual 6"x9" pad. The paper seemed to hold up well through my rowdy ministrations, and the surface didn't scrum up at all. 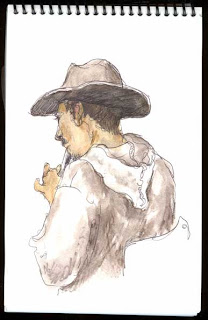 I didn't wet one of the sketches, the guitar player (second image down from the top). I loved the way the scribbled color looked, so I just left it. It will be okay as long as it doesn't get wet. I wonder if you could protect it with a fixatif (maybe on both sides of the paper!).

If you'd like to try making one of these sketchbooks, go to your local print shop and ask for Wausau Exact Vellum Bristol, 67lb, 92 Brightness, White, #82211, 8½ x 11. If they don't have it, they can probably order a package with little ado in their next paper order (print shops use lots of paper, and order often), then have them cut and punch it for you. Be sure to also have them cut and punch however many heavy cardboard backs and card stock fronts you need. To save money, you can assemble them and insert the coils yourself, putting as many sheets as you wish in each sketchbook. I put instructions for assembling these in the backs of all of my downloadable sketchjournals if you aren't sure how to proceed.

Hope you enjoyed this little trip to the pub. Be sure and listen to the irish music in the link above (or click here) . It REALLY sets the scene.
Posted by Irene Brady at 10:43 AM

Wonderful sketches. I know how hard it is to catch a moving musician.

Good if you're up for a challenge....

You really captured them beautifully. Love the delicate coloring.

I was enjoying the limited palette of browns, although it did make the first picture of the piper look a bit ominous. Love that hat!