I'm leaving on my Amazon trip in just a few hours, but I'm all ready to go so I have a few minutes to sit down and tell you what I added over the last few weeks whilst also preparing for my Big Studio Art Show and Sale. click on images to enlarge them

I'll get as far as I can before I have to 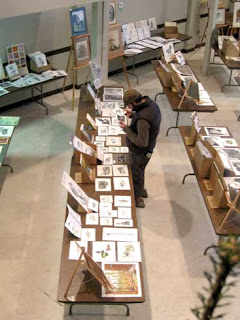 get moving. First of all, the Art Sale was reasonably successful. I'll put in some pictures without much comment, and you can make of it what you will. Cathy and I traded sides this year, so I was to the right as 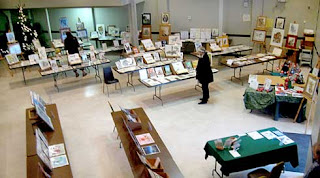 people entered, instead of to the left.

It looked pretty nice, in my opinion. The entire rear was lined with big noble fir trees Daniel and my hired hand Justin moved into the hall and placed judiciously. The guys helped me set up tables and assemble easels, and Cathy and her helper decorated them with white lights, which gave it a festive air. You can see glimpses of them in a couple of the photos.

I put my Christmas Tree ornaments on their manzanita "tree" at the entrance, where they welcomed people and proved a good conversation piece~ as I 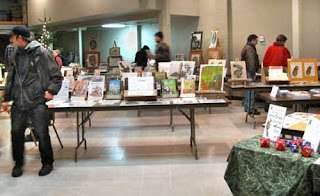 called my role of constructing them my "guilt-free TV watching entertainment," which seemed 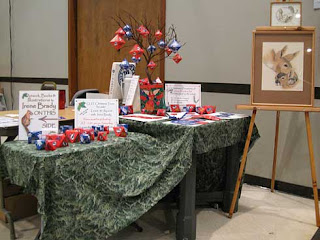 I'm getting hazy on this, but somebody somewhere had wondered if the ornaments couldn't be made to open so that people could put little gifts inside. Cathy noticed that you could glue all but one flap, which I'm showing here, put in a little something, then just press it shut. Cool!

Anyway, it took six hours to set the show up, a total of ten hours on our feet over the two days while the show was open, then about 2 hours to take it down. We made 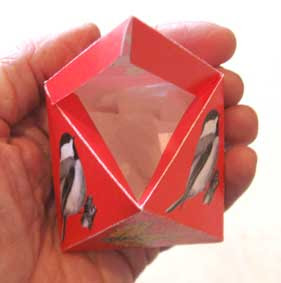 expenses and a bit over, but we've decided not to do it again next year. However, I do have an alternative up my sleeve, which I will tell you about when I get back. 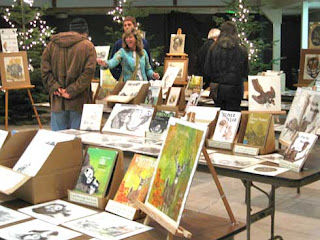 and people who've heard of me and wanted to meet me (well, I HAVE lived here for 30+ years). An old friend, Mark, came by and stayed to help disassemble the show ~ a wonderful help! By the time I finally got home, I collapsed in the chair and didn't move for a L.O.N.G. time. My feet still hurt, three days later!

But now that the show was out of the way (and believe it or not, I have completely put everything back in its place in the storage areas), I had a couple of days to UNpack all the cool stuff for my Amazon trip that I packed, what, a month ago? Then I added a few new things suggested by 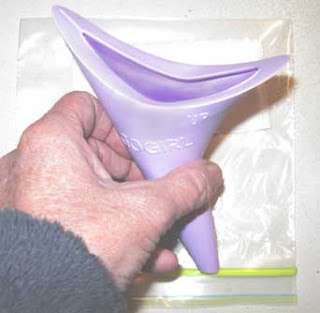 friends and people who have been a-travel and wanted to share. I think the entire carry-on ensemble is now up to 25lbs.

I had planned to attribute ideas to those who offered them, but it is after 8pm and I haven't had dinner yet. So I'm going to just offer these up with heartfelt thanks to those of you who suggested them.
First of all, the Plastic Pee-er. That's not its name of course, and I'm not going to tout any one brand, but here's the one I finally got, for about $10.

I blushingly admit that I have tried it out, both in the bathroom and outside. It works beautifully, and doesn't get you wet, although it feels a bit scary the first time. If you're wearing levis or tightish pants, you have to pull them far enough down that the spout can point downish (doesn't have to be much more than half an inch of incline, though). But still, that means you'd probably moon somebody standing behind you. I haven't tried this, but I'll bet you could tie a shirt around your waist, knotting the sleeves in front so that the shirt-tail hangs down in back, and no one would realize what you were up to. 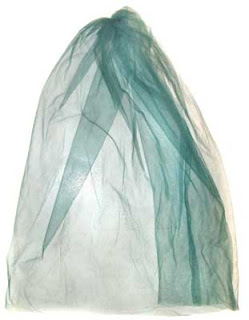 the next thing is a mosquito net. I made this from some dark tulle (stuff that tutus are made of, with a very fine mesh). It's just a piece about 18" long, gathered at the top, and sewed delicately down the side by hand. I can put it over my head and imagine mosquitoes vainly trying to get in. I can see through it almost perfectly, sort of a green mist between me and my subject, but it might mean the difference between being able to sketch or not. And it might be totally superfluous, but in any event it weighs virtually nothing and takes up about as much space as a cellphone in my bag.

And finally, I wasn't satisfied with my passport pouch. 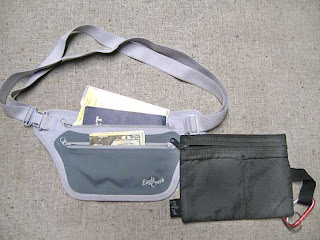 I found one that looks really nice and has two zippered pockets ~ one for the passport and vaccination booklet, the other for money or whatever. Here's the two of them together. I think the new one, on the left, won't be quite so tacky looking. Plus, it's easier to get at and won't need to be tucked in and out of my waistband.

Today I got a hat, too, but I didn't get a chance to take a picture of it. It has a brim, and a skirt around the back to shade ears and neck, because malaria pills can make you sensitive to sunlight and you wouldn't want to mess around with that on your vacation.

So I'm ready to go. I finished decking out my sketchbook with paper ruler, a paper Centigrade/Fahrenheit thermometer converter, my business card. I then covered the entire back and front with clear package tape to ward off moisture and humidity, then taped in a plastic pocket to slip flat things into. I don't have a picture of that, either, but it's similar to ones I've done in previous sketchbooks, so if you have downloaded one of those you know what 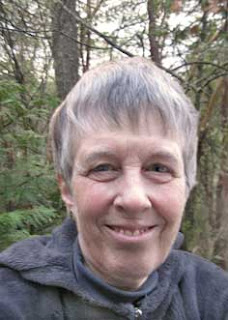 My plane leaves at 5am, which means I have to be there at 3am, but you can't ask a friend to take you to the airport at that ungodly hour when they have to work the next day, so I've arranged for Dan'l to deliver me to the airport at midnight and I'll settle down in a chair and nap. No biggie.

Thanks for sticking with me this far! See you in January!

Here's big hugs to all my friends, family and followers. I will think of you as I float down the Amazon, sweating, sunburned, happy as a clam. I hope.
Posted by Irene Brady at 7:56 PM

I wanted to wish you a MERRY CHRISTMAS!! You probably won't be checking emails while on your trip, but I wanted you know that I thought of you today! I hope the trip is going GREAT...looking forward to seeing your sketches and photographs!

My computer has been in the shop for 8 DAYS, and I just now got it back up and running! Eight DAYS!!!

I have had lots of time to clean house and catch up on my thinking. I'll be getting at the blog in the next couple of days, maybe today if I can swing it, but I have a lot of stuff to catch up on!

Thanks for asking, Debo!