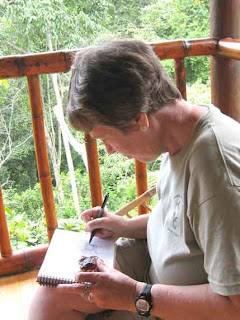 When I first dressed this morning, my clothes were as damp as though I'd run them only halfway through a dryer setting, but now that I've warmed them up, they’re starting to feel okay.

My first workshop session is this morning, and I’m ready to go. My students are a mixed bag, but all are beginners to nature drawing. Ann has taken the course before, and I don’t quite know how that will work, but it will all shake out, I expect. Joel wants to be able to draw what he finds out on the trails. He knows a lot about the plants and animals, so he should be able to identify what we draw. Adriana has painted for fun, and loves art but hasn’t had any instruction in drawing accurately, which is what she’d like to be able to do. Belen 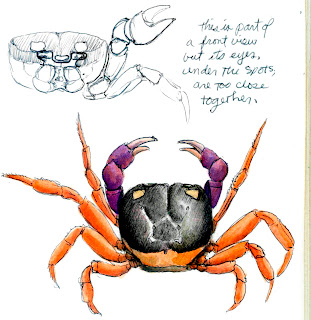 doesn’t really believe she can draw at all, but is willing to give it a try. Usually my classes have ten to twelve students – I keep them small so that I can give personal attention to everyone. But since this is a pilot project for the lodge, I have only the four students.

I sit writing in the quickly-brightening dawn, Daniel has netted a dead forest crab from the pool. They wander in from the woods, approach the pool for a drink, and fall in. If they’re fished out at dawn, most survive their impromptu swim, emerging lively and ready for a fight. This one didn’t, so I’ve sketched it here. This one’s carapace is about 1 ¼”wide, smaller than one I saw yesterday, which was wider than 2”. 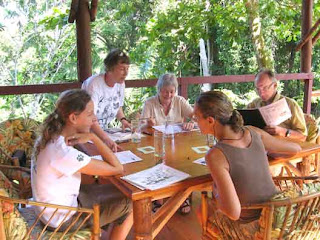 Today was my first class and it went very well. That's Adriana at left, then la professora (?!), Ann, Belen and Joel.

I have made an interesting discovery: the HB (medium black) pencils which I always use are not the best choice for this moist climate! The line they make is very light unless you press hard, which then indents the paper and makes erasing difficult. Shading is harder, too, as you simply can’t get a really dark tone. 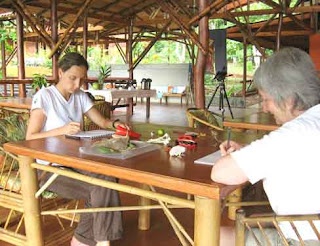 It works better on the heavier paper I had bound into the back of the workbooks for assignments because that paper is sturdier and has some roughness (tooth) to it. Additionally, the tortillons (smudgers used to shade smoothly) also don’t work as well as they do on dry paper. 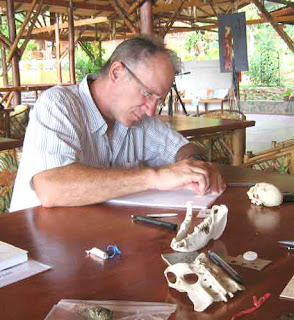 It looks like for humid climates a 2B lead on the rougher paper would work best. I don’t have those supplies with me now and there is no place to get them out here in the jungle. Still, that doesn’t materially affect the lessons. I can see I’ll need to be adaptable, though! 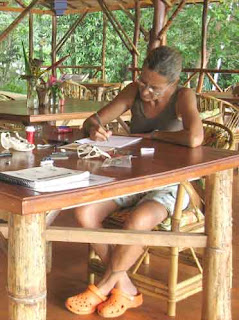 My students are working hard, and I think it's going to be okay that Ann has taken the class before (just last month) because she hasn’t had time to work on her art since then. However, a fascinating thing has occurred: I’ve never had a repeat student start at the beginning before as Ann is doing – she wanted to do that because she said she needed the practice. But her drawing skills have increased markedly since the previous workshop – her work is really excellent now, whereas it was good -- but not extraordinary -- before.

I wonder if Ann’s right brain continued to explore and improve over the course of the month, even though she didn’t sketch with it??? The other students are working hard, (today they drew skulls and fruit) although Belen is still convinced that she can’t draw. Joel and Adriana are also being pretty hard on themselves, but I’m seeing great progress. Plenty of improvement for a first day. 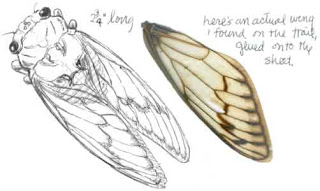 The lodge naturalist, also named Irené but pronounced Ih-ray-nay, brought us a huge cicada, 2¾" long, to draw. I’ve had fun drawing it, especially trying to show the body through the semi-transparent wings. I’ve glued a real wing I found on a trail next to the drawing. 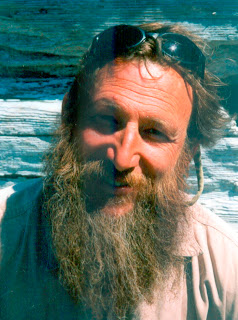 The cicadas are so amazing. In their favorite areas, the air is throbbing with their shrill zzzzzzzz. When they fly, they just launch off in a general direction and flap as hard as they can to get to a landing spot. They bump into all sorts of things and eventually arrive, but it ain't graceful!

By the way, this is Daniel. We've had a LOT of adventures together.

'This one’s carapace is about 1 ¼”wide, smaller than one I saw yesterday, which was wider than 2”.'

Wow - that is tiny! Did you use a magnifier?

Hi Natalie,
For really small stuff, I do actually carry a magnifying glass about 2" across that slides into a leather case. I could get more magnification from a plant loupe, but they have such a tiny field of view that you lose all perspective. This crab was easy enough to see, though, so no trouble.