5:15am
Well, now the workshop is finished but the fun isn’t over and I’m going to keep sketching, for sure! 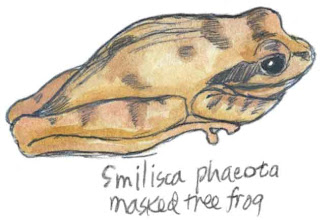 Last night the masked tree frogs invaded the pool, nine of them, about 3” long, tan and so fearless that we could approach and touch them. They have charming faces, friendly and a bit goggle-eyed. At first, as we sat by the pool with our margaritas and jugos (juices) and cervesas (beers), they’d let out an occasional “wank!” But during 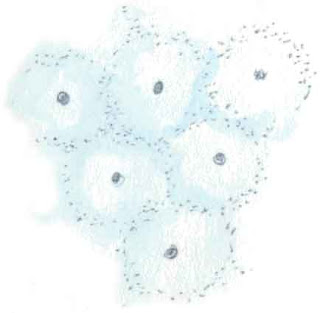 the night they came into full voice.

“Bwrawk! Barawk! Brock!” They’d sing awhile, lapse into silence, then sing another chorus -- all night long. After awhile we fell asleep to the raucous lullaby. This morning, clusters of eggs dotted the pool. I estimated a couple of thousand. We could barely see the gel surrounding the little black dot of a yolk The gardener dipped them into a tub and took them away to hatch elsewhere. The frogs left the pond before sunrise and are perched fearlessly on palm leaves by the pool, in plain sight with people passing by barely a meter away. When the frogs dry, they are slightly iridescent. 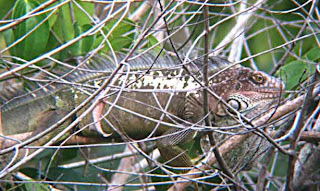 I managed to photograph a huge iguana through the spotting scope from the restaurant. I think I could really get into this! The lodge also has a box of skulls that have been found out in the forest over the years, and I want to sketch the oddest ones while I’m here. This is a pizote, the coati, long and skinny. 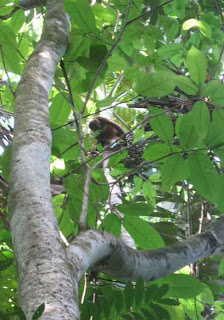 Today I am tackling the Ridge Trail. It goes back to the head of the ravine to the south of the lodge, then out onto the next ridge to an overlook, then down a steep scramble to the beach. It is humid and the air is very still in the forest, and rather dark – I’ve been trying to photograph things like cicadas and anole lizards without a flash, but I’m having trouble holding the camera steady enough to get a picture. Next time I think I’ll bring a little tripod. Earlier, a troop of spider monkeys were eating from clumps of fruit above me, with most unmannerly insults shouted from full mouths. I had to dodge a branch that came crashing down. Did they do that on purpose?

Right now I’m sitting quietly on one side of a steep canyon trail. For about fifteen minutes I’ve been watching a pizote foraging along the opposite canyon wall about 50’ away. It has no idea I am watching it nose under roots, leaves and into crevices and crannies, snapping up insects, spiders, and other goodies. Earlier three pizotes spotted me and barked “Wuk! Wuk! Wuk!” in alarm then slipped away through the forest. 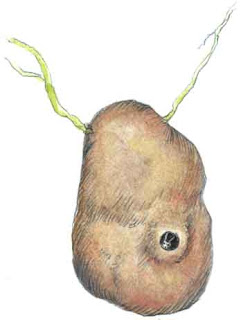 This part of the trail descends into the ravine at its very head, then turns around and starts up the other side. At the cul-e-sac I spotted an oval wasp nest looking a lot like a potato, hanging from a tiny tendril loop. Approaching closely, I stopped short when I saw little wasp faces peering out at me. No WAY am I getting any closer. Most of the wasps here are gentle and tolerant, but I’m not taking chances. 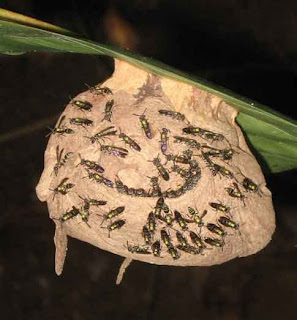 About 30 feet away I lurched into another wasp nest hanging from the underside of a big leaf. THEY got mad, and gathered into fighting formation, so I quickly retreated (without incident).

It may rain – it’s thundering regularly. Hope I don’t get this journal wet! It’s so humid my glasses keep fogging up as I write, so it’s actually bathroom moist, and right here/now it is now 87 degrees. I keep smelling a skunk, maybe it’s some plant like skunk cabbage. 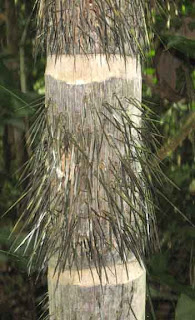 Oh my! I just almost ran into a palm tree with bands of 3-5” spines up and down the trunk! Very sharp and nasty. They surely protect this palm from climbing critters! (I just broke a spine off and am using it as a toothpick. Perfect.) 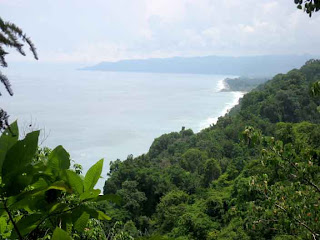 Noon: HAH! I made it to Buena Vista point and the view of the Pacific and the beaches below is terrific, although it's a bit overcast! I think I’ll lunch on my granola bar and cool down in the cool breeze off the ocean, then I’ll head back up the ridge since I took some loop routes and didn’t get to see all the trail. There’s so much to see. 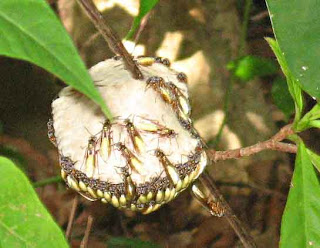 Speaking of which…as I sit here munching I am seeing something seriously strange downslope about 40’ below the viewpoint. It’s a sphere about the size of an orange, maybe 3” in diameter, but creamy white and it has a fascinating design…..which I have finally realized is wasps clinging to the outside of the sphere. Okay, lunch is done, time to go see. 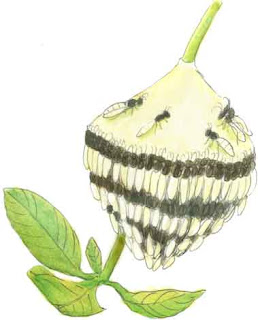 Well, it’s not a sphere as I thought from above—more a cream-colored disc, but the slope is so steep and crumbly there’s no way to get closer than about 6’ to inspect it. These may be wingless wasps, each about an inch long with black head and thorax and shiny cream-colored flattened abdomen.

The mass looks solid, but while the upper ring of wasps hangs onto the edge of the disc, I can't see what the ones beneath are grasping... There’s been almost no movement for the fifteen minutes I’ve been watching. Wait. I think maybe they have wings, but they’re smallish and pale, and held low. [Later: only by viewing a close-up of the photos I took am I able to see the wings: tan, and, as I finally surmised, held down alongside the abdomen.] 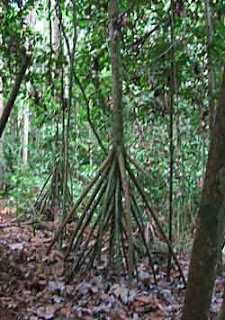 1:30pm I've headed back, and just came through a grove of "walking palms." They're called that because the trunk has multiple legs at the base, and it keeps sending down new roots on the sunniest side, allowing those on the darker side to die -- so it eventually "walks" to a more advantageous spot. 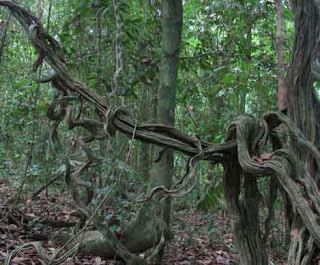 I've also seen more than one magnificent specimen of monkey-ladder vine along this ridge. The biggest one loops and twines around the trees (and itself) in intricate arabesques. It must be ancient, and it certainly gives a junglish character to this forest.