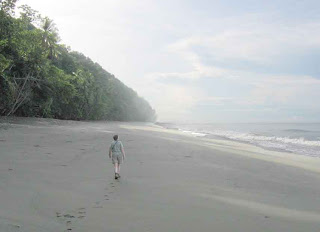 10:30am This morning Dan and I started down to the beach at seven, reveling in the pounding surf, skeins of brown pelicans patrolling the waves, and the fringe of palms, kapok, and beach almond trees fringing the beach. Crumpled papery eggshells littered the soft gray sand where a turtle nest had been raided overnight by a pizote. 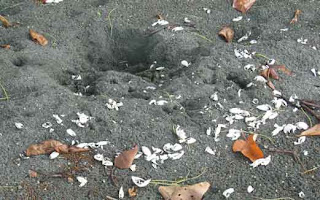 We meandered south to the tidepools to bask in warm pools shadowed yet awhile by the cliffs. I lay in the pool floating weightlessly as the occasional incoming wave washed almost-hot water from more distant pools into mine, then surged across the pool to meet a similar frothy wave coming around the rocks at the other end, gently, gently. Sheer bliss. 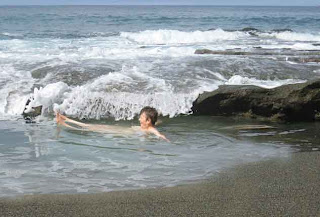 We visited Dan's favorite wave-catching spot and let the rising tide froth around us. One largish wave broadsided us and swept me, giggling, ten feet up the sloping beach. We played and talked for hours in the shade of the cliff, hoping to avoid a tropical burn although since this is nearly on the Equator it’s possible to get quite a burn even on overcast days. Reflections off the sea can burn, too. 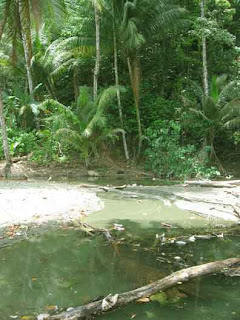 I’m off down the beach to the waterfall lagoon up a narrow canyon. Dan’s following at his own pace. He wanted to nap and I want to sketch, so away I go. We’ve seen twenty pelicans and a frigate bird, we watched a pod of humpbacked whales swimming south, and Dan saw flying fish rising and splashing back into the sea. (Later: Irené says the flying fish were probably mating manta rays!) 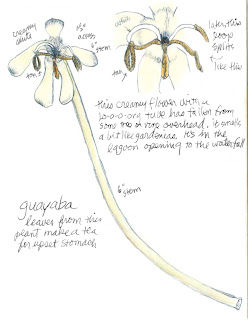 I’m sketching sprouting coconuts in the lagoon, and flowers with a most incredible gardenia scent. Gerardo just descended out of the narrow canyon, escorting an athletic group who just finished rappelling the waterfall. He says this is a flower from the guayaba plant. 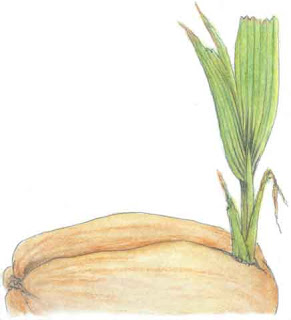 (Later: a tea made from the leaves of this plant is sometimes offered to guests who are suffering from upset stomachs.)

12:22pm Daniel came up from the beach and we went up to the waterfall a short distance up from the lagoon. This is a magical place, and even though five people had just rappelled it, it looked primeval, as though we were the first ones to ever see it. 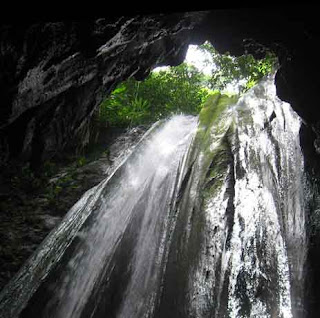 A wide stream of silvery water pours of a stone lip 30’ above us into a pool in a deep grotto. We stepped into the grotto and stood under the falling water, getting a breathtaking shoulder massage for as long as we could stand it. 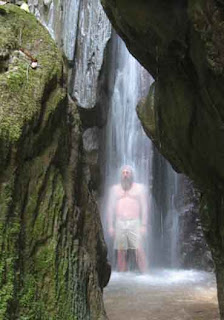 Coming back out, we discovered a tiny poison-arrow frog, shiny black with bluish legs and a red band around its froggy outline. We found another one further downstream near a meter-long string of brilliant red flowers hanging from a sturdy heliconia plant. 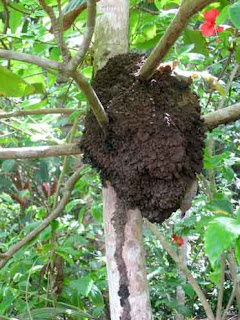 Termite nests like nubby black footballs perch in trees. A pizote forages on the bank above us and macaws flash in the trees above.

2.23pm Up the trail..... I have left Daniel back down on the beach again – he loves to sit and watch the waves, but Gerardo told us there was a sloth alongside the trail and I don’t want to miss it. I mean, it COULD move away. So I’ve been sitting at the edge of the trail for some time now watching through binoculars and I have spent a somnolent session sketching a sloth sleeping (say that fast three times!).

Ah, movement! It has turned it’s head to look over its shoulder! And it moved its foot! Now its chin has drooped and it is sleeping whilst looking backward. The sloth is slightly below eye level, about 200’ away. It’s sort of tannish gray, and I’d never have found it on my own.

5:14pm I sat on my little sitting pad watching and sketching for about forty minutes.

The sloth began the session in one position (see the drawing with leaves) and ended in the other position (looking over its shoulder) which it held for fifteen minutes with occasional head movements. I finally left with a numb bum, tired but elated with my good fortune. Dan came along an hour later and admired it too, apparently in the same position.