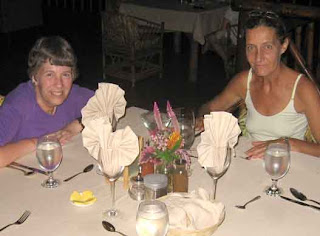 7:04am Last night after a marvelously decorative dinner, Gerardo brought us a Bufo marinus to inspect -- a HUGE toad about 8” long and 4” wide. As Gerardo was showing us the huge glands behind its eyes which exude an irritant (to discourage predators), the toad swelled up bigger and bigger as it gulped down air. Soon it resembled a cantaloup with a face and legs. When Gerardo released it, it gradually deflated and hopped away into the shadows. 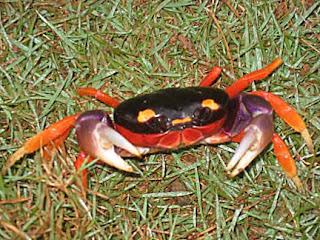 Only four frogs serenaded us from the pool during the night, but no eggs floated on the surface this morning. Perhaps the frogs gathered to reminisce about the delightful time they’d had the night before. Or perhaps the guys came back to brag while the ladies went off the recuperate. That seems more likely...

There were ten crabs in the pool this morning (two expired) but I fished out the rest with the net. These land crabs live out in the forest in holes in the ground. I saw one yesterday on the Ridge Trail popping back into its lair. 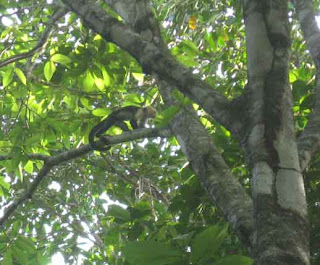 8:55am This morning I’m hiking the Passiflora Trail. Daniel drove me up to the trailhead in an El Remanso car because it’s a steep climb and I stubbed my toe yesterday (it’s a bit swollen, but I can’t miss an adventure!). At the trailhead we watched a troop of titi’s (squirrel monkeys) crossing overhead, one with a baby, tiny enough to have held in the palm of my hand, riding on her back. Then a troop of carablancas (capuchins) followed, leaping from branch to branch fearlessly. I’m working on my Spanish, and it’s fun learning new words.

Only a few steps into the shadowy trail I startled up a quail-like bird, very quiet and mousy, which I had trouble seeing in the dim light. It may have had markings, but I couldn't see any as it tip-toed furtively into the dark under some big leaves. (Later: Joel says it was probably a Little Tinamou.) 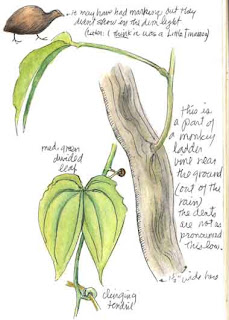 More monkeys are overhead. Titis are barking like chihuahuas and dropping hard little fruits down on me, and a bit farther away a sound like someone throwing around sheets of cardboard or heavy paper is capuchins leaping through heavy leaves in the canopy. It has begun to shower lightly – I heard its approach as a light tapping on the canopy to the southwest. I looked for the darkest bit of canopy to stand under and I’m staying dry enough to keep writing. This may last awhile. 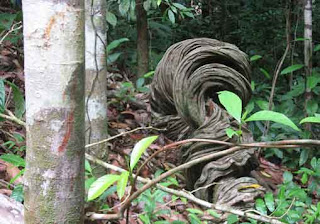 I just sketched a young monkey ladder vine detail. I love this vine with its pockety flat lianas and split leaves. Some of the vines grow as big around as my waist at their bases on Ridge Trail. (Later: I found and photographed a really big one on this ridge, too)

The carablancas are now almost directly overhead. When they make a long leap, big water droplets come plummeting down. So far I haven’t gotten drenched. 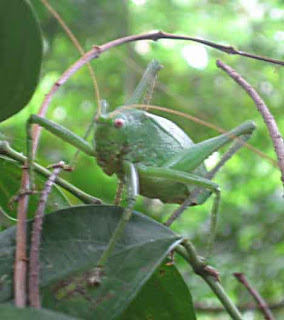 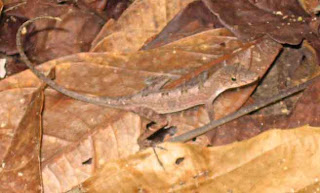 10:40am I’m having a delightfully poky morning trying to spot creatures before they spot me. I have had success with an anole, two katydids and a giant cockroach. They blend in or hide so perfectly, they're hard to see before they leap (and it's even harder to get a crisp, clear photo in the dim light). 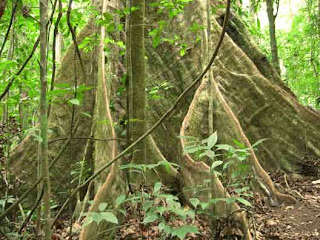 There are some incredible giant buttressed trees in this part of the forest. Joel recently went out with Dan and Gerardo, and they found bats, spiders and other fine things in the crevices of buttressed trees. Wish I had a flashlight!

4:19pm I'm back from my hike and it’s downpouring. Sitting on our cabina's veranda, I am dry and content to watch the natural libation. Daniel and I had planned to go down to the beach this afternoon, but we paused for a siesta and it began to rain. The downspouts are flowing, the sea is silver, the pool is rippling with dimples and the air is soft and cool. Actually, I don’t mind the enforced relaxation. 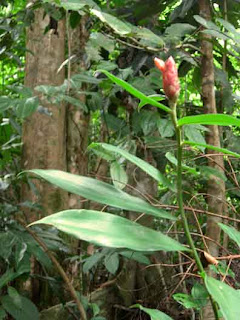 Over the roof of the restaurant I can see the red and blue flash of macaws, and there’s no missing their raucous, grating cries. They speak often to each other over their fruity lunches and as they fly two-by-two, hither and yon, over El Remanso. The toucans, with their outsize bills and brilliant markings, sing a melancholy hooting cry and fly singly, while the green parrots gabble noisily and labor mightily as they flap along. 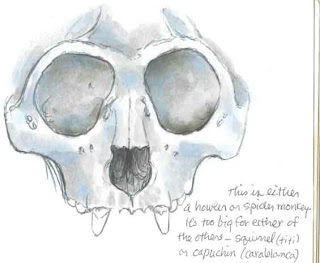 I’ve been sketching the skulls in the skull box. I love skulls, and I've been experimenting with the various colors one can use to show "white." I did the pizote skull yesterday with lavender and yellow.

Today I'm going to try blue and black (gray, more likely) on the monkey skull, then maybe ochre for the sloth skull. The skulls are actually all a sort of grayish-white, but hey, I'm the artist here!