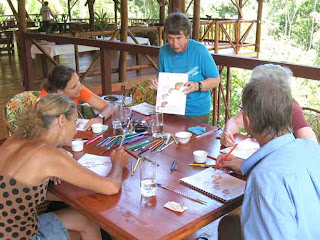 Last night, after we went to bed, we were awakened around nine-thirty by firecrackers – first a series of “poppers” then a great boom, and what sounded like celebratory cries from the workers’ quarters. Very odd in this quiet atmosphere of shirring cicadas, croaking frogs and faintly crashing surf. Only this morning did we discover that the “fireworks” were actually the sounds of a big forest tree going down and the surprised cries of the Ticos who were nearby. First came the cracking pops of sinewy roots breaking, then the boom as the massive trunk hit the forest floor. I don’t remember hearing crashing sounds as it fell. They must have occurred but since I believed it was firecrackers they didn’t register. Wow!

11:15am ~ Class this morning was short – I planned it this way so that students could have two initial long days to get the basics then two short days to give them time to sketch and draw and color whatever pleased them, with coaching from me during the afternoons. After the morning session of watercolor pencil, the students are beginning to feel they are making progress. They are producing quite excellent drawings of plants and fruits, and they seem a bit amazed and pleased at their previously undiscovered abilities. Even Belen is beginning to believe in herself! Yes!

12:32pm ~ I found this mushroom, a kind of stinkhorn, along the trail to the waterfall near 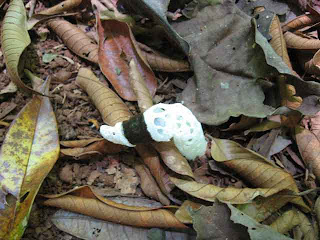 the driveway. It was a delicate lacy white encircled by a shiny, gooey mahogany strip which stank horribly. When I cam back by later, it had already begun to collapse, drooping halfway over, and a tan beetle was crawling into one of the holes. I’ve read about these – the stink draws in beetles looking for a decaying corpse, and the beetles spread the stinkhorn spores as they search for something to eat (or something like that). Joel says it has a lacy mantle over all when it first emerges but I so no sign of one. Ephemeral to the max! I drew this from memory, because I needed to get back to my students. The photo shows it an hour later.

I also found this green leaf on a trail. It has been rolled then belted with an extremely strong silk strand, forming an open-ended tube. There is a wad of silk inside, but nobody is living there. The leaf is chartreuse with shiny top and matte underside. Later: The kitchen staff is familiar with this leaf tube. They say a caterpillar built it, and I’m sure they’re correct. 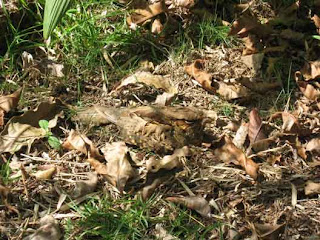 2:24 ~ The sun is blistering hot (although it’s not too hot in the shade) but I went up to the nest of a pauraque (a nighthawk) which we had seen before on the nightwalk and to which Joel had led us early this morning.

I think I took a good photo – it allowed me to approach to within about five feet without moving. I’d never have seen it if I hadn’t known it was there [click on the two photos for a better view]. Now I’ll get back to helping my students. I try for a light presence – leaving them to their own resources for awhile, then returning to help and give advice, but not being too intrusive with my presence. It can be a delicate balance. 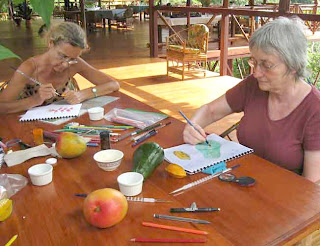 5:35 ~ I was busy coaching my hardworking estudientes (busy painting their chayote, mango, carambola and heliconia) when Duende, the gardener, heard an animal scream and went scrambling down the hill to see what had happened. After a short search he discovered a boa constrictor eating an agouti (a rabbit sized rodent with long, skinny legs and short ears). The scene of the crime was directly below the lodge on a very steep wooded slope, down a couple of hundred feet (and I in my sandals with no heel straps and a honky sunburn on the tops of my feet, but no WAY I could miss this adventure). The gardener, the kitchen staff, Irené, and Gerardo, the new guide-in-training, handed me down the slope with grace and great courtesy as I slipped and slithered in true touristy fashion, and they made a place for me barely 3’ from the snake as it worked its 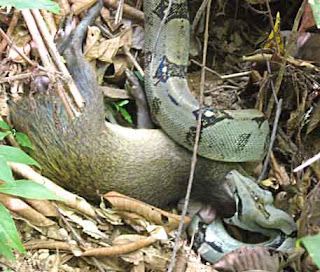 gaping mouth over the relatively gigantic head of the agouti. It was terrifically amazing to watch, and I took photos and watched, agog, for about half an hour. Adriana had scrambled down, too and watched the snake from above. Here’s the scene from memory, although I got out a reptile guide to fill in the snake’s pattern (a typical pattern, but not THIS boa's pattern, alas!). I was interested in doing this from memory because I'd just been telling my students how important it is to observe subjects closely enough to be able to draw from memory later. I did okay, I think. 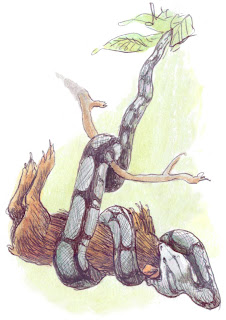 As we watched, the boa engulfed the entire head and started working on the shoulders. It threw a couple of loops around the body to squish it smaller yet, although it seemed amazing that it could possibly get that huge hairy cylinder into its sinewy tube of a body. Gerardo estimated it would be another forty-five minutes before the boa could get it all down, and since it was very uncomfortable perching on the steep slope, and the engulfing was happening slo-mo, and the kitchen staff needed to get back to preparing dinner, we returned, with Irené hauling me up the steepest parts while Gerardo shoved discreetly from behind on a couple of occasions. What an adventure! Later: Elyer, the head waiter (who is working to be naturalist guide) says this boa was about 1½ meters long, fairly small.

What an amazing experience!

"I'd just been telling my students how important it is to observe subjects closely enough to be able to draw from memory later."

What would to you say to students like me who have a disability (in my case multiple sclerosis) that means that they forget what they see as soon as they cannot see it? Personally I tend to use a small and very portable digital camera with a large digital display on the back as an aide memoire...

Hi Natalie,
I don't know how MS manifests itself in terms of memory -- when I try to memorize things I actually describe the scene with words (internally), as in: ..."head is a diamond with a sawed-off nose-tip, eye is halfway along mouth opening, open edge of mouth is a vertical leg of an italic L..." etc. Then I can recall the words later, as well as the visual imprint of the scene. I wonder if that would help? The digital camera is a great help, too, and I often take photos as well as memorizing.