Happy New Year!
Last year I shared the narrative of my Christmas festivities with people on my mailing list (I know, I know, I am incredibly old-fashioned in these days of Snapchat, Facebook, etc., but I really LIKE the easy-going ramble of email and blogging)  but people who are now reading this blog may not have seen last year's Christmas celebration, so I'll share the pictures of this year's good times which I enjoyed with my Rivera family and friends.

It's a tradition in Belize to celebrate Christmas with tamales. Grinding the corn for the tamales, preparing the ingredients to put in the tamales, wrapping the tamales, steaming the tamales, then eating them and taking some to share with neighbors who might not have a large family with which to enjoy such festivities.  We did all those things.

By the time I arrived at Riveras' house at 8:30am on Christmas Eve Day, the banana leaf wrappers had already been cut and held over flames to soften them, and Yesenia a neighbor who had come for the day with her little girl Caroline, and Gaby, the only girl in the Rivera family, were cleaning smoke off the leaves. So I cleared a space on the outdoor kitchen table and joined in with the task with a damp cloth.

As we were finishing, Doña Nora and Don Nacho returned from Benque in the truck with a five gallon bucket of the masa, corn flour made from corn they had just taken to town to be ground at the tortilla factory (a little tienda in Benque with a grinding mill).

We mixed the masa with water in dishpans, squishing it between our fingers until it made a slippery gruel, then Nacho poured it into a cauldron and added water while Nora stirred. Then they put it over an outdoor cooking fire to thicken under Kevin's vigorous paddling.

When it was properly thickened, José was set to stirring the home-made tomato sauce over the fire while four of us -- Nora, my friend Millie who lives with the oldest Rivera son Oscar, Gaby and I -- set out piles of banana leaves, chicken and pork chunks, the masa dough, and the tomato sauce when it came off the fire.

First, a large spoonful of masa dough was patted onto a double layer of banana leaves.  Then a piece of chicken or pork was pressed into it and a spoonful of sauce was ladeled over it.

Nacho had to teach me again how to wrap the banana leaves around the tamale so no sauce could escape and no water could enter when they would be later steamed.

Soon my fingers recalled the dance from the many tamales I had made last year, and we all spent a couple of hours spooning, scooping, patting, folding, and piling our finished tamales on the table to be snatched up by Kevin, the tamale-runner, who stacked them in a big tub to await their debut in the giant cauldron, which would soon be emptied of masa, scrubbed out, and filled with tamales for steaming.

It was a warm, fun time, with laughter, joking, an occasional "Ooops!" when a banana wrapper would split and need repair or replacement before being carried away by Kevin.  This was Gaby' first year making Christmas tamales, as last year she just watched. It IS a bit of a spectator sport as you can see here.

It was a lovely sunny day, in the 70s, perfect for our energetic activity on the wooden table next to the clay cooking fogón where Nora and Gaby prepare family meals.  My Spanish is still rudimentary, but now and then I understood an entire sentence, which was a great pleasure to me.

That night, we feasted on the perfectly cooked tamales, and after dinner Nora, Millie and I carried a stack of them to Millie's father and stepmother, who live about half a mile down the road, then stayed to chat an hour or so until Nacho came to find us. We walked back to Riveras by the light of a half moon, accompanied by cricket chirps and a couple of refrains of Feliz Navidad.

I particularly enjoyed the tamale delivery, because it was the first time I had been able to see how my Lights for Students project lights up a family's house at night (I have been purchasing and installing solar lighting in the homes of neighborhood students so they can do homework after dark, and the entire family benefits from this project -- maybe I'll do a blog about that later).

All in all, it was a lovely day. We ate tamales the next day, too, Christmas, but it seems that most Belizeans celebrate Christmas and New Years Eves, for the most part, and just eat and socialize on the actually holiday.

So that was my Christmas. A few days later I spent my 74th birthday solo (by choice) at Micasa, my tiny Belizean house in the jungle which I had built this summer, and which I am still working on -- shelves, curtains, stuff like that.
It's gradually becoming my second home, with a few little adventures along the way -- like this one which I journaled my last morning there: 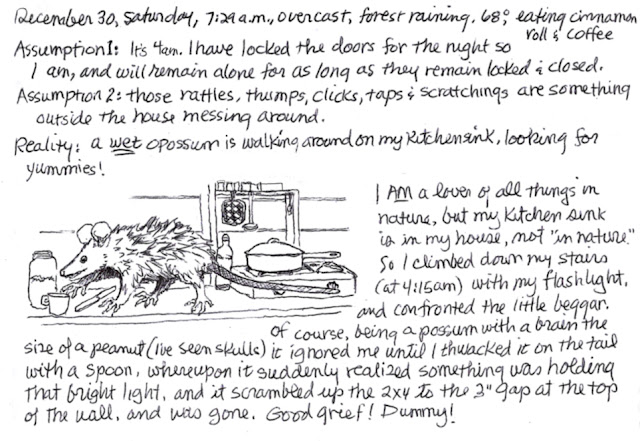 I'll blog my progress with Micasa later, too.

And with that, I leave you with my fine memories of 2017 in the Belizean jungle, and with hopes for many more good ones in 2018 for us all.  Happy New Year!

Thank you Irene. I so love hearing your adventures, seeing the pictures, your drawings and notes. Happy New Year - looking forward to many more.

And a Happy New Year to you, too, Nancy!