New Sketches from my New Studio

It’s been cold here for the last few weeks, colder than I remember it being in the last three years, and it sometimes makes it difficult to do more than wrap up in a fleecy blanket in my armchair and read.

I’m hoping {these folks} (click on the link) will soon get their solar grill to market and maybe between grilling gibnuts and chugging cervesas I can blow a fan across the top of the grill and heat my house during the several weeks of “winter” here.  It’s amazing how cold 63° can feel in an unheated house if there is no place to occasionally warm up  [blows on fingers, twitches blanket over legs]. 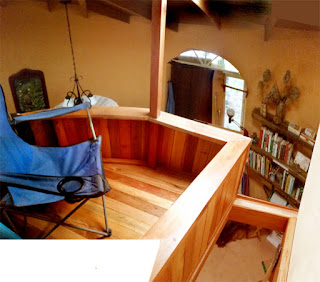 Those of you who are experiencing sub-zero temperatures, wind, snow and Frozen Nozes are likely chuckling disdainfully at my so-called “problem.”  I understand.  I would probably be doing the same if I were way up north listening to such a lament from someone down here in balmy Belize.  Go ahead. Mock me.  I can take it. But I’m shivering nevertheless . 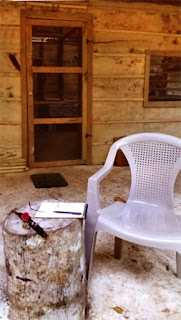 However, that being the case, and not to put too fine a point on it, I am pleased with the new art studio I have created up in the loft of my earth bag house.

It is a relatively warm spot with unbeatable lighting both day and night, being directly under a skylight (which is three feet overhead) for daytime art and with spotlight lighting (originally meant to spotlight the lion carving on the bathroom door before I put the loft between the two) which is a perfect light for my sketchbook work after dark. 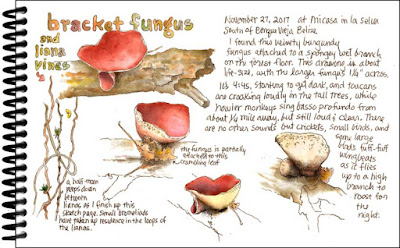 And so, I have finished two more sketches, the Cecropia Trunks and the Fungus. I did the initial fungus ink drawing at Micasa in the jungle in November, using a tree stump for an easel on my veranda.
I finally got the color onto the sketch last week.

In retrospect, I don’t think this is a bracket fungus, as bracket fungi tend to make “shelves,” more like the one I sketched in my Oregon woods in 2011, shown here. 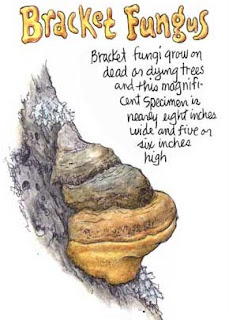 So I’ll have to get creative and paste a piece of paper with a more accurate descriptive name over the word “bracket.”

Alternately, and probably more simply, I could fix it in Photoshop. We'll see. 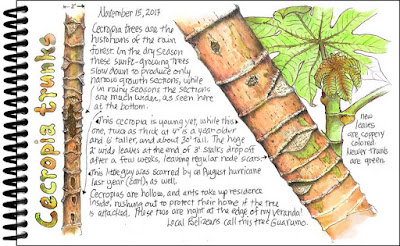 The Cecropia Trunks sketch got colored, too, and here's how it looks now. It turned out to be more complicated than I expected, but I managed to do a serviceable job.

When I compare it to the bracket fungus I did when I was sketching daily in 2011, though, I can see that I need to practice to get up to my old speed.  You'd think it would stick with you, but it's easy to forget little tricks and things one does to create effects.  I'll have to relearn them.

On a slightly different note, back in 2013, during the vacation trip wherein I decided I wanted to spend the rest of my life in Belize, I made sketches along the banks of the Macal River about five miles south of here where I stayed at a resort for about a week.  It was my second stay there, the first one being celebrated in my sketchbook “Belize – Jungle & Beach Adventures.”

My life shifted gears at that point as I decided to fling caution and old age to the wind and change my entire life by moving here.  As a result of the following chaos, I never finished or uploaded those sketches – or any later ones done here in Belize – to the web for people to purchase and enjoy.  And now I am debating…..should I go back to these uncolored sketches and finish them to make a new Belize offering?  Then keep going with more? 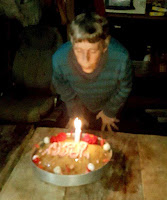 I could start a series such as: “Belize – Along the Macal River” or “Belize – Sketches from my Jungle Cabin” or “Belize – Some Rainforest Wildlife” or “Belize – Orchids & Palm Trees”, or “Belize – A Mayan Healing Herbarium”  stuff like that that.  What do you think?  Do you think anyone would be interested? And if not, should I just do them anyway for my own entertainment?  Feedback, please????

My last (74th) birthday was spent at Micasa, which I mentioned briefly in the last blog entry, although I forgot to mention the lovely surprise birthday party Millie and the Riveras, my extended family,  gave me before I left. It was a complete surprise, and it made me feel very warm and beloved. 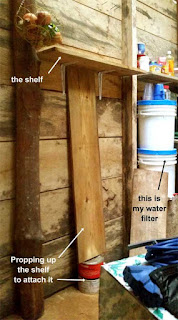 Up at Micasa I managed to get a LOT done – I posted {a video} of some of it on Facebook.  I had measured the spaces for the shelves on my previous visit, bought the wood, and had Freddy cut them to length for me on his Sunday work day since they’re dense, heavy hardwood and I didn’t want to spend all my time at Micasa sawing them with a handsaw.

Nacho, Darwin and Estuardo had to haul the planks the last 500 feet on their shoulders because the road was impassable.
Putting the shelves up by myself was a challenge since they’re so heavy. I screwed the shelf braces onto the shelves first, then propped each shelf into place with miscellaneous boards, broom handles, whatever, while I screwed it to the wall.  It felt really good to get things off the heap on the table and up onto shelves.

With the shelves up, I moved on to put shelf paper on the kitchen counter. 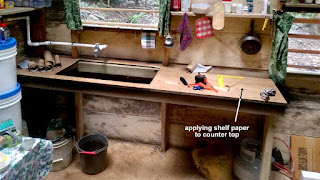 Tiles would be nicer, of course, but I am now on a strict budget, having spent all my loose cash and beginning my life of austerity on Social Security. I just wanted to cover up the raw wood and make it washable.  I'll be interested to see how well shelf paper holds up on a kitchen counter.... Gotta say, it made washing off the possum footprints super easy.

The curtains add a bit of a domestic touch,  softening the roughness of the chainsaw-cut planks.  Dontcha think? 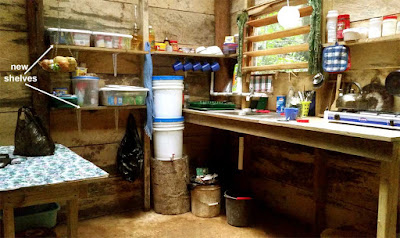 One of the things that interests me  is:  how much "stuff" and "polish" does one need to live a comfortable, satisfying life.  What difference does it make if the walls are painted, or whether the kitchen counter has tiles or shelf paper on it, as long as it's clean.  I do like nice things, but how much do I NEED them?   (Probably only as much as I "need" them to impress other people.)  Still, if I can also make it pretty..... as well as serviceable and please myself ... that's a fine goal, I'd think.  Serviceable. That's the keyword.

Next visit, I'll put up more shelves, install the rocket stove Nacho made for me, put screens over the possum cracks,  and get the solar panel and battery connected to the lighting system I installed last time. My tall ladder is the problem.  I keep hauling it back and forth from this house to that house in Nacho's pickup, but it always seems to be at the wrong house when I need it.  The road is still next to impassable, so I can't just go fetch it when I need it.

Still, things are moving along nicely. It’s been nearly three weeks since my last visit, and I think it’s time for another trip to the woods and mi casa, Micasa.

p.s.  Next entry, I’ll show you the finished jaguar art at my earth bag house entrance.  Maybe.
Posted by Irene Brady at 4:11 PM