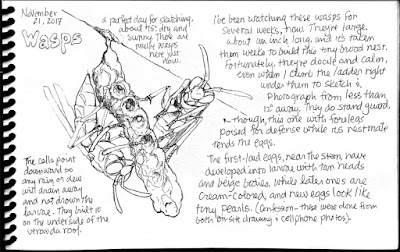 Onward with my quest to restart my sketch journaling while balanced daintily on a 6’ ladder.

Where am I on my journey to Restart My Journaling? Well....I have actually gotten out my watercolor pencil box. It is lying on the desk.

I have not opened it yet, but I will, because this sketch is a little confusing in black and white.

But color will improve it, and what better way to jog my hand to apply the color than to tell you about my intentions?

I’ll scan in the colored drawing when I get it done.  Hold my feet to the fire, my friends!!!!!

Okay, now, I promised in my November 11 blog that I would do  step-by-step tutorial on how I painted the murals on my house walls.
If you aren’t into details, this one may be a bit “much" and you can stop here. But if you’ve ever wondered how the heck one gets that art from a  sketchpad up onto the wall, read on.
I’d gotten a little experience at mural painting on the walls of the North Mountain Park Nature Center in Ashland, Oregon a few years back, so I was intrigued by the invitingly blank walls of my new Belize house.

My earthbag house, which I have cunningly named Casa de la Tierra (House of Earth)  is actually built on an old Mayan terrace, next to a completely buried (it is said) Mayan temple ruin, so obviously the most appropriate decorations would be Mayan in nature. I wanted them to look authentic, so I nosed around on the internet to see if I could find some good subjects.

My research turned up ancient figurines, hieroglyphs, wall paintings bas-reliefs carved into stone stelae (like this one of Lady Wac-chanil-ahau standing atop a bound captive warrior), plus painted or inked codices – bark-paper books the Mayans created around the 1100s. Some were pretty gruesome, so I avoided those. Others, like this winsome little jaguar tickled my funny-bone.

With lots of subjects to choose from, I picked out several for my mural, looking for drama and detail and avoiding modern interpretations (as far as I could tell) with which the internet is flooded. I decided to copy them almost exactly to keep them authentic-looking.

I originally planned to make the serpent god, a really stupendously magnificent being, the first thing you see as you come up the walk to the house. I even had it all graphed out and ready to transfer.  But after a few months of thought (you shouldn’t rush such things) a benign realistic jaguar began to manifest itself, because really, the jaguars have a wonderfully strong presence here, they, and the other wildlife, are some of the main reason I chose to live here. I wanted to honor that.

Ready to begin muraling, I took photos of my house walls (not so easy on a round house!).  I joined them together in Photoshop and created a flat view to use as a template with correct proportions (I could have just sketched out the plan, but I was having fun in Photoshop).
On the house, I measured and recorded every wall space, the distance between windows, and the distance from the floor to what would be the bottom of every image. Then, in Photoshop, I superimposed a transparent grid sheet over the plan, sizing it so that each square represented one inch. Then I “pasted” a mural image into each spot onscreen.

Now, with subject choices made, I created a fresh 8½” x 11” .jpg file for each image and superimposed a transparent grid on THAT so that every inch grid line on the house wall plan corresponded with the inch markings on my printed-out paper grid.

On the paper grid (my "cartoon"), I counted squares and wrote down measurements (in red on the ballplayer figure here) to correspond to measurements of the actual wall. That done I slipped the gridded diagram into a plastic sheet protector to keep it from getting wet or dirty – I didn’t want to have to re-count all those measurements.

Time to transfer!  Using a #2 pencil, a yardstick, and a kneaded eraser, I measured the wall up from the floor and in from the window to find the outermost point of the ballplayer's toe (27” up and 4” in from the door frame – see the red arrow on the cartoon) and made a dot there.  Then I located a distinctive spot a few inches up, at the edge of his anklet (34” up and 7” in) and put a dot there.  I kept working, finding important points on the drawing, measuring VERY carefully.
Finally, I had a dot-to-dot outline.  I went back and added some dots. Then checking back and forth frequently, I sketched the outline, erasing when I goofed, redrawing again, and re-checking measurements if something looked off. It is much easier to draw the outline with all the dots to aim for (I’ve enlarged the dots on the ballplayer grid so you can see them) than to try to do it freehand.

I didn’t put all the details in this pencil outline on the wall. I added those later when I was actually painting it.

At first, I thought I would color the figures, but after looking at the black outlines awhile, I realized that the simple black outlines looked elegant and that adding all the colors might make the mural too overpowering.

But it did need some color, so studying Mayan drawings online I found a motif called a skyband, a horizontal element which supposedly was used as a division between the natural and the supernatural worlds in Mayan mythology. It’s usually brightly colored in Mayan paintings, and I used it to connect all the murals into one continuous design.

With the ballplayer outlined in black paint, I penciled in then painted a section of skyband in the colors that seemed typical to many Mayan paintings: teal green, cinnamon, a darker red-brown, light yellow, and yellow ochre (back to the paint store in San Ignacio!). Just for the record, the mural paint I’m using is Comex Vinimex, pintura vinil-acrilica premium, interiores/exteriores, satinado, which is pretty easy to translate: Interior/exterior vinyl-acrylic, satin finish house paint.

Over a period of several months, I penciled in, then painted outlines for the rest of the figures, plus some fascinating glyphs like these at left (I’ve no idea what this one  means.  Maybe “Your grandma was a howler monkey!”?  Fortunately, few other people can read them either, so I’m probably safe.) I continued the skyband as I worked my way around the house toward the entry, completing Ix Chel, the moon goddess holding the moon rabbit (did you know many people don’t see a Man In The Moon? They see a Rabbit!).

Then I added that whimsical jaguar with a lotus on its head (jaguars often swim, coming up draped with pond -- or lotus -- weeds).


Lady Wac-chanil-ahau with her basket of offerings (but without her doomed captive!) came next.

One other thing happened before the mural was done. When I’d finished with the Mayan parts, I saw that I was having a problem with the natural red clay wall surface crumbling off, sand-grain by sand-grain.

I realized that my murals were destined for a short life unless I took measures.  So I painted cream-colored house paint carefully around each figure while Freddy, who has been working at my house to pay off the price of items brought to him from the US, painted the rest of the house.

That stabilized the walls around the figures, and I then varnished the figures themselves to glue all their little sand grains to the wall.

Only then did I paint the jaguar on the cream-colored wall, using the same grid and dot technique. Jaguar spots were applied free-hand. Here’s my feline friend, the life-size jaguar in full color, who now greets visitors with his inquisitive and riveting gaze. I still need to paint the rock he is perched on. The skyband will continue around the rock to be covered by his front paws. 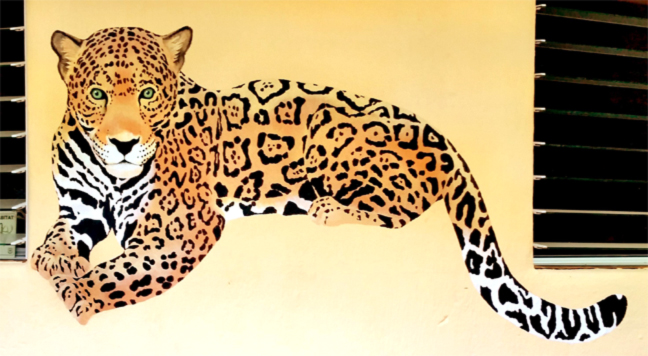 The jaguar is a powerful god in Mayan mythology, so to my mind, he guards the entrance and graciously protects all within. 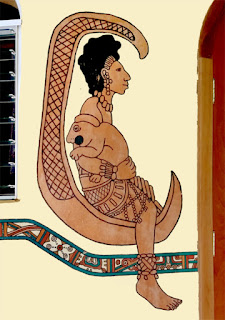 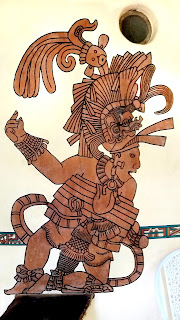 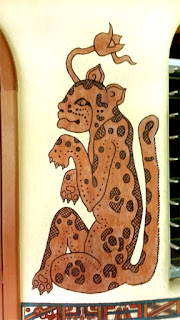 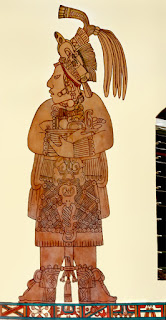 So there you have it -- "How I Painted My House Murals."
That’s my story, and I’m stickin’ to it
Hasta mas tarde - until later!

Hi Irene! Thank you so much for sharing your mural process! I absolutely love that you chose a Mayan theme and let history and local natural history inform your process. Last I recall, you had sold everything, had a builder ready to go somewhere in Central America. I think that was you! So I am excited for you and will see what else you have written! I am planning a trip to Honduras and would love to add Belize to part of my trip! Will you be offering classes?

Hi Irene, Happy New Year! I’m enjoying your blog particularly seeing how you have infused this ancient culture into your home. Thank you for sharing. I have always loved your work and how well you Pay Attention ❤️

Hi Yogimama, I no longer teach classes (at least as of the moment, can't say it's forever!) And yes, that was I, with a builder in Central America, all ready to go. After that, I didn't have TIME to write anything until now. Thanks for remembering, and getting in touch.

Hi Goly, are you the same Goly I knew in Oregon?

Thanks for visiting to say hi. I feel very drawn to this culture in many ways, and have made good connections that help me reinforce that feeling. It comes out in the art, I hope.

But I can't take much credit for Paying Attention, I was born that way. My mom always said my most frequent word as a toddler was "Why?" -- not as in Why do I have to do that, but Why does it work that way? That's always tickled me.