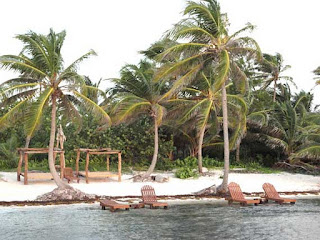 I blogged about how my gear worked in Belize here, so today I'll tell you about the actual trip itself.

The journey from Oregon to Belize was something of an epic trek, taking 32 hours from the time I left home til the time I checked into my room at Ak'Bol Barracks Yoga Retreat. 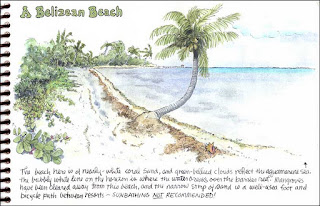 Of course, that wasn't all air time since I did have to travel from the airport to the water taxi depot, then take a launch for a couple of hours to get to Ambergris Caye. There was a 9-hour overnight layover in Miami, however, in which I was trying to sleep on the floor. I think I've finally decided to act my age next time, and bust out of the airport to rent a room with a real bed for the night. My bones didn't LIKE that floor! 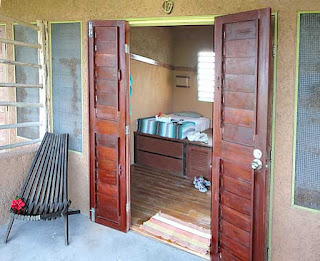 it wasn't just a matter of "like" or "not like" ~ the big problem was that I was so tired I was either sleeping in my room (cool room, by the way, with bathroom down the stairs for $35/night!) or half asleep for the next two days of my four-day stay on the beach!!! Ouch! Lesson learned!

But once I revived somewhat, I had a great time, renting a bike to ride into the little town of San Pedro and explore, beach-combing along the crushed-coral beach in front of Ak'Bol, and admiring the roseate spoonbill, wood stork, ibis and herons that fished in the lagoon.

The name Ak'Bol means "heart of the village" 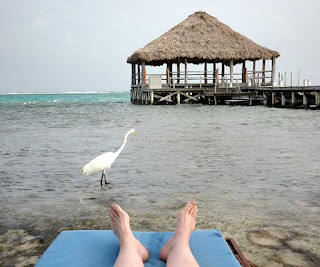 and the people there were warm and friendly. To help me regain my poise, I signed up for the best massage of my life from Milio. He and Kirsten, who teaches yoga out in that little thatched place at the end of the pier in the image at right, own and run the place.

There were lots of things to enjoy, including the warm, moist breeze (heaven to this cold, 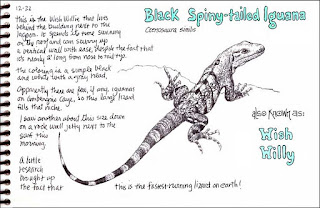 chapped face from wintery Oregon), the huge orange conch (say "konk") shells washed up on the beach and used for decoration everywhere, the marvelous Wish 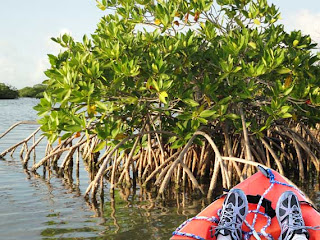 Willy lizards ~ close kin to iguanas, kayaking in the mangroves which enclose the lagoons in the center of the Caye (say "key"), and other pleasures such as sitting in the little open-air restaurant drinking piña coladas.

If you were following my blog from Kauai you will have read about my panic attack whilst snorkeling there and understand why I might not have gone snorkeling in this amazing snorkel heaven on the barrier reef just off Ambergris Caye. If I had been in tip-top condition, instead of tired and a bit run-down, I might have gone for it. But.....trying again while I was tired and not truly in top condition would have been pushing my luck. Next time, maybe. 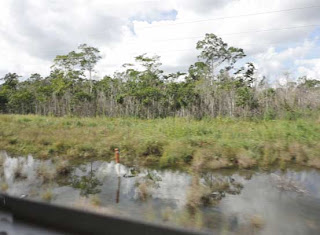 Alas, before I had enough time to explore everything it was time to catch the cross-country bus from Belize City to the Maya Mountains in the western part of the country, about 70 miles to the west. The bus passed through the mangrove lagoons of the flatlands on the coastal side, with moist 93° breezes streaming 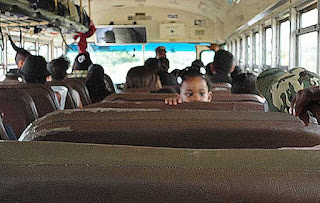 through the open windows and between the packed passengers, and finally started climbing into the cooler hills. It took a little over two hours, but at about $3, who could possibly complain! I was hesitant to photograph unsuspecting folks, so I only took this one picture of a big-eyed child on the bus. 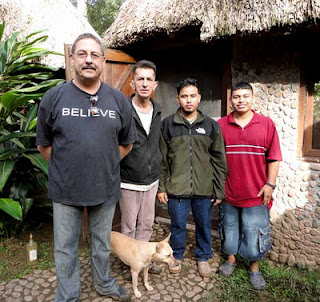 about three that afternoon, I was met by Ron at San Ignacio and driven the seven miles to Macaw Bank Jungle Lodge, an ecofriendly retreat nestled in a dense jungle which Ron and Al have created in the jungle. EXACTLY what I had hoped for! 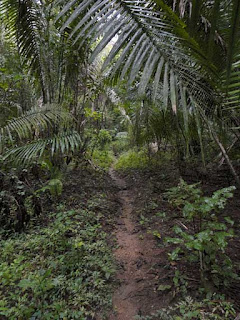 after me royally for eleven days while I roamed the banks of the Macal River and the mysterious jungle paths, most of them trimmed 4'-6' wide to make getting lost impossible and to make the jungle accessible and, for many people, not too scary.

I definitely was not scared, content to spend hours wandering just a few yards, with cool things to see and explore. Atta (leaf cutter) ants, for instance, whose diligent trooping back and forth from a "victim tree" to the nest with their booty wore 6" wide paths across the trails. 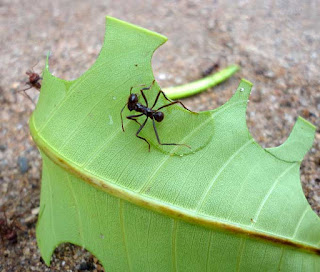 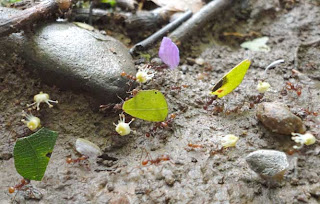 Here's one ant on a leaf down by the Macal River making its arching cut across the leaf, and then you see a stream of them marching stolidly across the trail with leaf, bud, or flower held high overhead. Be sure to look at these images close up!

I spent Christmas Day exploring dark jungle trails, about as excited and pleased as it is 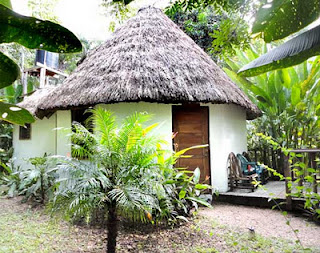 possible to be. When I returned to my cabana, hot, dirty, tired and supremely content, with a handful of purple blossoms yet to sketch, I found a bowl of exquisitely ripe starfruit and oranges waiting for me on my deck railing. What a delightful and unexpected treat! I think both Ron and Al were a bit worried that I would get bored during my eleven day stay, but I knew there wasn't much possibility of THAT.

Okay, I'm going to sign off here, but I'll add more tomorrow, probably, since there are quite a few more adventures to be shared (with Mayan Ruins, an innertube trip down the Macal River, and some incredible flowers, butterflies, iguanas and mushrooms to show you). See you then!
Posted by Irene Brady at 11:41 AM

great pictures hope to see some more from you.