I tried out two cabanas while 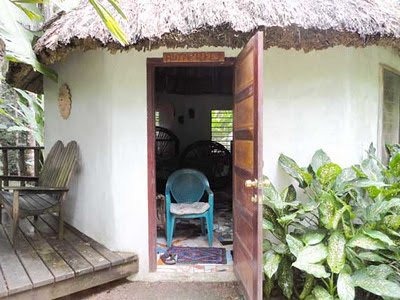 at Macaw Bank Jungle Lodge. This one is Butterfly, and it had a desk that would make a better drawing table than the one I was using in Macaw Cabana. Henri graciously helped me move, about halfway through my stay.

Mostly I only used the desk in the evenings, to add color to my drawings. If it 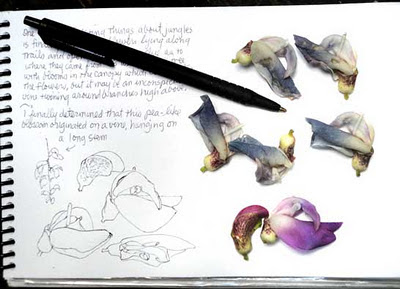 rained during the daytime ~ and it did occasionally rain, 'cause this is the jungle and rain (and heat) are what MAKE it a jungle ~ I sometimes sat in my open doorway and drew from there. For the most part, though, the warm, mostly misty rain was nice to be out in and I just hooked an umbrella to my belt with a carabiner if rain looked eminent.

[BTW: I was using watercolor pencils to add color to my drawings, and discovered, 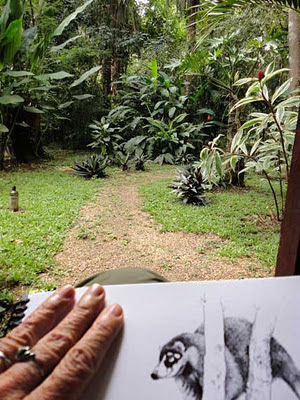 on about the fifth day in the jungle with 100% humidity, that when I'd try to make a mark with the pencil the the pigment point would BEND! As a workaround, I dabbed color off the end of the pencil with the paintbrush ~ this works fine, by the way, but it's not how one expects to use watercolor pencils. As they absorbed moisture, the "leads" got limper daily, soon becoming about the consistency of lipstick. Then, to my dismay, the softening, swelling pigments actually split their wooden pencil casings! Since my return to Oregon (and, roughly, 30-45% humidity), they've returned to their former hardness and the split pencils have regained their usual shape. So be forewarned ~ if you plan to use watercolor pencils in a humid place, either store them in a drybag or use regular watercolor pigments instead.]

Sketching en pleine air, a fancy way of saying "outdoors," isn't always feasible, and sometimes I took photos with the intent of drawing from the camera later. This is really easy with the newer digital cameras with large viewing screens. 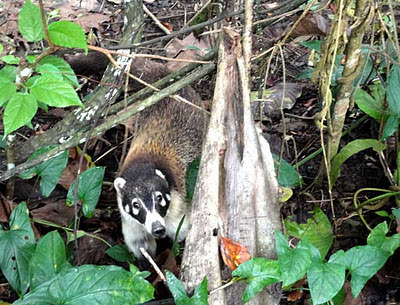 instance, Tallulah, the resident coati, moved like quicksilver as she zipped 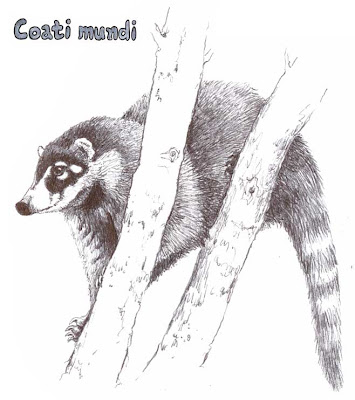 up and down trees searching for insects under loose bark or attached to the undersides of leaves and stems. Even the camera sometimes only caught a blur. So sketching would have been a losing prospect as I scrambled through tangled undergrowth trying to keep her in sight. But I did manage to get a couple of photos from which I could make this sketch. 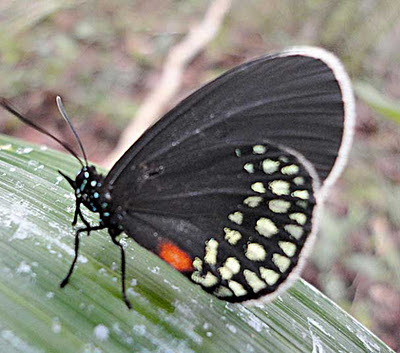 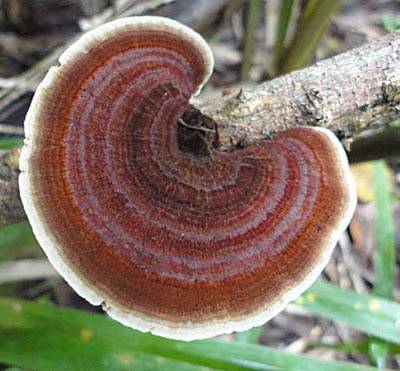 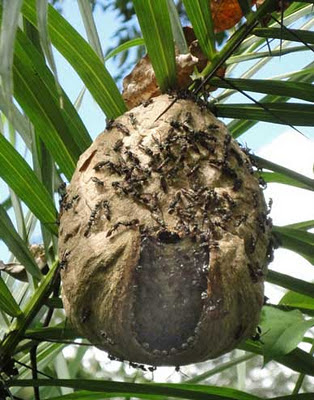 Other subjects also posed difficulty. Butterflies, of course, would NEVER alight long enough for a good sketch, the cinnamon-red bracket fungus was on a steep hillside in a pile of branches and sticks, and the wasp nest attached 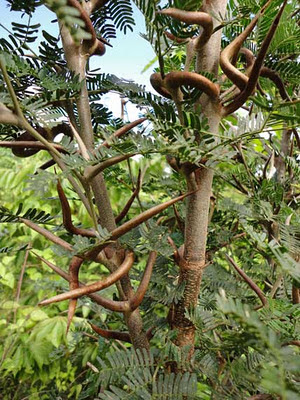 to the underside of a thorny palm really didn't lend itself to a close inspection, much less a lengthy drawing session! Frequently, bullhorn acacias, inhabited by nasty, hot-headed ants which apparently craved an armed encounter with me, kept me from getting close to some other subjects. No, sometimes drawing conditions were not ideal, by any means. 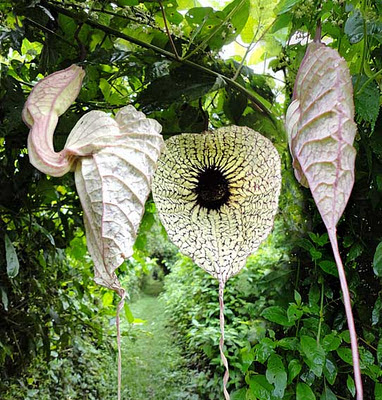 Other times I got lucky. One day I discovered huge, 5" tall contribo flowers, with their 12" tails, hanging over a trail. I found this spent flower 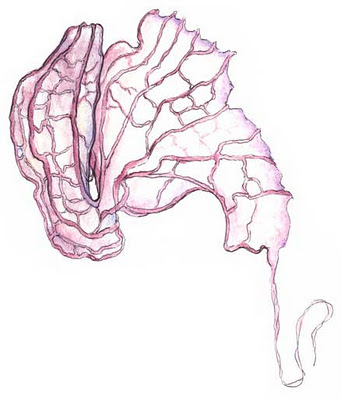 lying in the path, so I carried it along and sat on the riverbank for a couple of hours sketching and coloring it. Despite its lovely aspect, the contribo is a really smelly carnivorous plant, and uses a pitfall system similar to that of pitcher plants, trapping and disassembling insects in a pool of digestive fluid. But it was great fun to draw. Its specific name is Aristolochia trilobata.

Since I had a new camera, I spent some time playing with one of the really neat features, the panorama button.

On the bank overlooking the river was an ancient Ceiba tree which was estimated by a visiting botanist to have been a sapling when the Mayans were building their temples. It was fun trying to encompass its entire height in one picture, but even so I couldn't back up far enough to include the amazing width of the buttresses in their totality.

Buttresses (long, skinny above-ground root-like fins) prop up many species of really old jungle trees. Jungle soil gets so much rain that it washes away and never builds up a deep loam on the ground. Trees are consequently anchored in a thin layer of soil and could be easily blown down in a 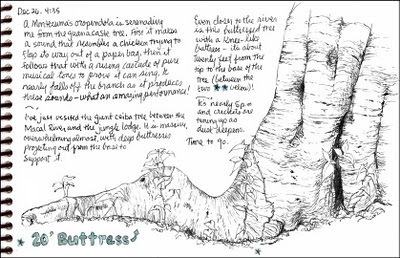 hurricane without their buttresses.

I sketched this magnificent 20' buttress that anchors one of the other old trees near the river. 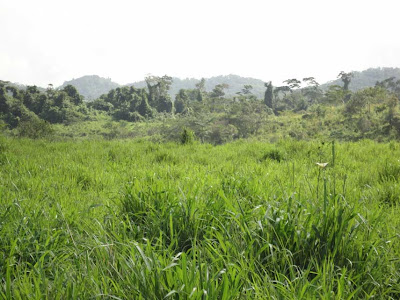 y ended. One warm, humid day I carried a big black innertube upriver, passing through a wide savannah to put in upstream of the lodge. Then I spent a couple of dreamy hours slip-sliding down the 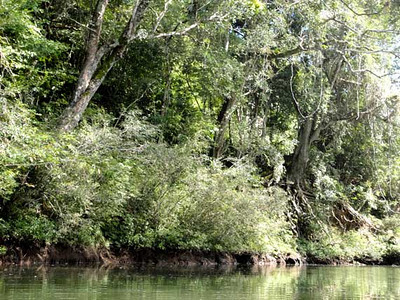 A couple of rapids added excitement ~ but not too much, since I was on my own and not really seeking high adventure ~ and several huge orange iguanas sneered down at me from their high roosts above 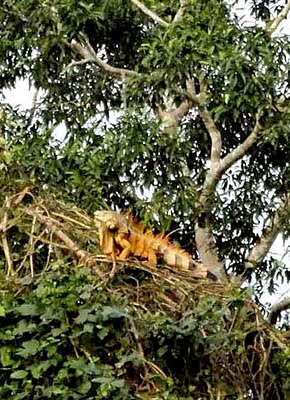 the water as I passed beneath.

On my last afternoon, walking in a melancholy Eeorish manner along a river path, ("Oh dear, my last day. I'll probably never see this tree again. I'll never walk this path again. Oh dear!!") I was rewarded with the appearance of this delicate lacy-skirted mushroom 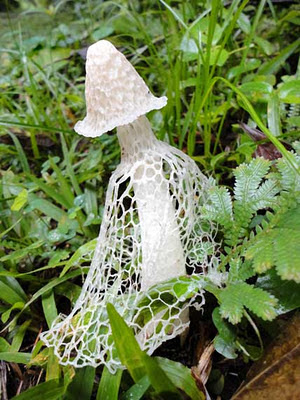 called a Veiled Lady. Definitely cheered up, I drew it on the last page of my journal.

So. We have traveled together, dear friend, through the seventeen days of my sojourn on Belizean beach and in Belizean jungle.

There are 24 pages in my sketch journal, and I invite you ~ in a couple of months ~ to visit my website to download a copy if you are still interested.

Thanks for coming by! Leave a message if you have enjoyed this, so I'll know whether I should bother to blog the next journey I make. I'm considering one to South Africa........

I very much enjoyed hearing about your trip. Thank you for sharing the adventure. :)

Irene Thanks for sharing your journal. Please DO keep blogging about the trips! It is fun to see what you did and saw, and how you do your journal pages.

Thanks!
Marlene from Alaska

Irene, I look forward to every blog post you put up as they are so enjoyable to read. You take in such unique local features and your drawings are an inspiration. Please do continue to blog your trips and other adventures. JohnB

I also enjoy your blogging and your trips. If I ever get a chance to travel in these areas I know who to go to for advice! To me your sketches are marvelous and gives me something to aspire to. I hope you don't mind but sometimes I model my sketches after yours. Keep blogging, sketching and traveling!

well......okay! I'll do it again next trip, and who knows? I might actually have something to say before that....

Thanks for your interest!!!!

Thanks. I enjoyed reading and look forward to more.

my mouth hung open a lot seeing the sketches and photos...my mind was fascinated and I'd like to read and see your work each day I manage to wake up and live some more....winna jill mordasky

Winna, thank you for your kind words. There is nothing quite so absorbing and awe-inspiring as the myriad life in a rainforest! All my life I had wanted to live in the jungle, so these trips were tastes of dreams yet unfulfilled. What better way to test your fantasies than eleven days of immersion!