The jungle is a fascinating place if you keep your eyes open and don't jump at every crackle or strange noise. This lovely passio 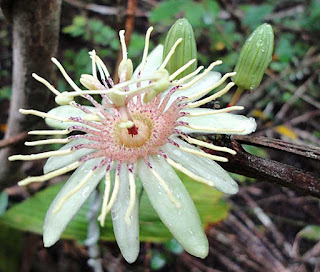 nflower was glowing right beside the trail on one of my forays.

But there were lots of crackles and strange noises, most of which could be attributed to birds, squirrels or just the breeze rustling the fronds of a papery palm leaf. There were probably eyes watching me at all times, ones I had no idea of, but hey, that's 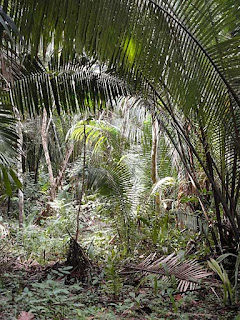 part of what makes people watch horror movies ~ that desire to be living on the edge of excitement. So I welcomed in all of the strange things (well, not the ticks!) and had a great time.

Ron warned me about ticks. Only one other guest, he said, had ever gotten ticks, and that was because they were crawling about in the greenery looking for insects. Hmmm..... "But," he said, "while they do itch, they don't carry Lyme Disease."

So since I planned to be poking around in the shrubbery, I decided to take my chances. I got a few, but they were teensy things and easily plucked off. I get ticks all the time around my house in Oregon, anyway, 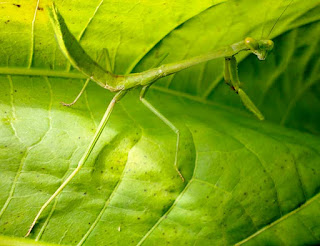 so it was no big deal, and worth the adventures.

I mean, look at that curious mantis staring (guiltily?) back over its shoulder at me. It looks like someone "caught in the act," doesn't it? I met that little fellow off-trail. 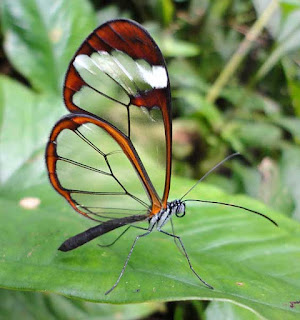 And I was totally entranced with this amazing Clearwing Butterfly. You can see right through its wings. Butterflies are normally not my forte, but Belizean butterflies seemed to be tamer and less likely to fly than most butterflies I've tried to photograph before, and this picture was taken from about two inches away. 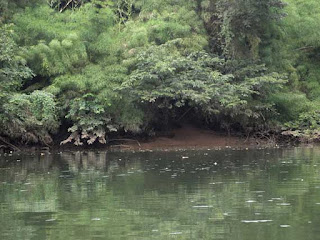 I fell in love with the Macal River, which flows past the end of the trail from the lodge. Cattle egrets swooped in every night to roost in these trees, spangling the darkening riverbank with sparkles of white. Kingfishers clacked up and down its length, diving for the small silvery fish that flashed in its shallows.

I spent a lot of time down there sketching, and actually spotted a crocodile species which hadn't been known

to spend any time in the immediate vicinity. That was a Morelet's Crocodile, a small, docile creature which has, on occasion, dined on a cat or other small creature, but wouldn't THINK of bothering big folk like me. Or you.

And look at this colorful king vulture that landed in a big tree just across the river from me. Imagine 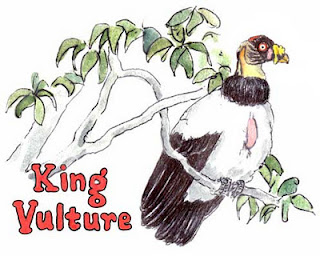 a vulture being so winsome as that.

Well, as you can see, I was having the time of my life.

Every night, Ron and Al cooked delicious dinners, and we chatted afterward by the light of kerosene lamps. I really enjoyed those evenings. The lodge has electricity, 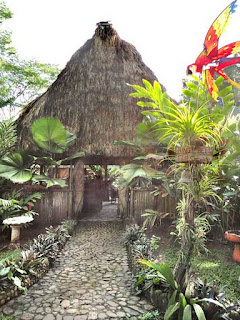 but only kerosene lamps are used for lighting in the thatch-roofed open-air restaurant, which gives meals a charming intimate air.

There was always hot coffee and toast ready for me at breakfast time (I eat a small breakfast ~ I think Ron was distressed at my deficient appetite because he delights in creating delicious breakfast fare and toast doesn't quite cut the mustard). When other guests were there Ron spent this time helping them figure out how to spend their day, how to get to interesting places, and connecting them up with their tour guides if they were off to see the sights.

I was having such fun (and I was on a limited budget, too) so I only did one outside tour during my stay, a visit to Caracol, an ancient Mayan ruin, for about $85. This ruin complex 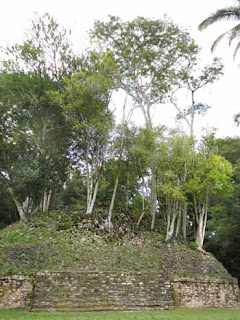 measures 12 miles across and once had a population of more than 140,000 people. We just visited a tiny part of it, but it was amazing.

There are still a lot of undiscovered or unexcavated ruins in Central America, and many of them just look like hills. You can see from this partially excavated ruin at Caracol how you might mistake the tree-covered hump of a ruin for a hill! Henri took me to see some ruins near the Jungle Lodge, which are totally unexcavated, and if I hadn't been told they were ruins, I'd never have guessed. 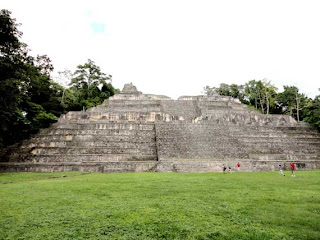 they're excavated and restored, however, they can be MOST imposing. Here's the main (so far) ruin uncovered at Caracol. It is much bigger than it looks here (there are people in that photo).

The Mayan people still live all around this area. Both of the young men on the Macaw Bank Jungle Lodge staff, Henri and Angel, have Mayan roots. 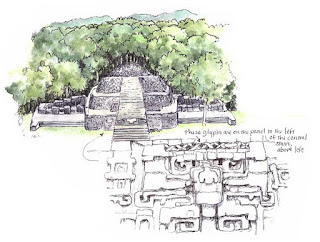 still learning how to do scenery, so sketching the ruin was a real challenge for me. I wanted to show some of the glyphs, too, so I did a detail to show them up close, then an arrow points to where they were on the ruin. You may have 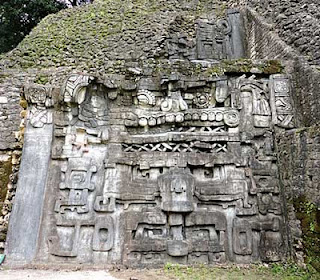 to squint at it to get the full effect of the glyph!

Some people go out every day on a new sight-seeing tour, but I was glad I had set my sights on Seeing One Little Part Of The Jungle Well.

I had daily adventures just a few feet from my door ~ watching a "hand" of bananas mature over the deck of my cabana, for instance. Discovering several colonies of brilliant red mushrooms. Finding trees covered with huge thorns. 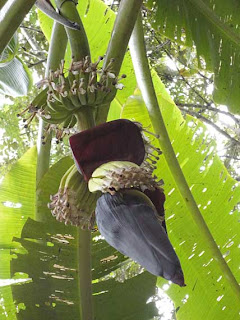 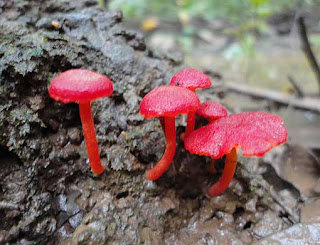 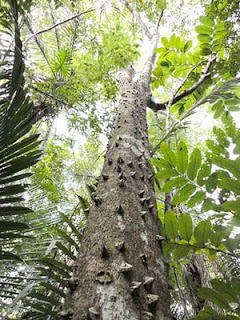 EVERY time I went out, I discovered wonders that left me saying "Wow! and "OMG!" ("Omg" is really hard to say, y'know! Try it! )

Anyway, more wonders tomorrow!
See you then!
Posted by Irene Brady at 12:18 PM

Oh Renie, I absolutely LOVE your travel blogs!Photos, text, sketches - yours are the best I've ever seen.

PS -- What do you suggest for binding the printed PDFs that I'm going to buy? I like spiral binding but don't want to have to buy a machine to do it well.

Glad you're having as much fun with them as I am, Cuzn! It's a real kick to write 'em, too!

As for binding, I suggest taking the pages you've printed out to a printshop. If you want them cut down to the shape of the sketchbook you can either do that ahead of time or they can do it for you quickly ~ or you can just bind them as-is.

You can either punch and spiral bind or comb-bind the pages. I've done it both ways. The spiral is the most sturdy and costs roughly the same.

To punch and spiral bind my trip book was only $1.80, and well worth the cost. I could have comb-bound it, but decided the plastic binding might not survive the trip in my flexible fanny pack.