The Last Day of the Workshop (but not the last day of this blog).

I got up pretty early, because on class days it's hard to find time to journal-- by 5:45am I was lying in the hammock on my patio writing busily away, and sketching in some things I had collected the day before. (Remember, you can click on the graphics to get a bigger image.)

I was hoping this last day 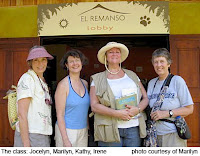 would be really fun ~ the only fly in the ointment was that Kathy would miss it, needing to catch the lodge van to Puerto Jimenez to make her flight to San José.

We all went to see her off and got Adriana to take a group photo of us (here it is again, the one I opened this blog set with). We hugged Kathy warmly and saw her off up the lane. As the Ticos say, "Que lastima!" How sad! Interestingly enough, during her previous morning on the beach (I think it was then -- right, Kathy?)

she had painted a charming little beach scene that turned out to look amazingly like the scene we opted for during this day's final pleine air assignment. She later glued on a fragment of sea shell, as a memento.

In the classroom, after the morning's critique of the previous day's work, we packed up our journals, binoculars, watercolor pencils, sunscreen, waterbottles,

etc., and headed down the trail to the beach.

Since we were all keenly interested in all things natural, it was hard to make headway in the face of the fascinating things we kept encountering...the camouflaged frog on the trail; 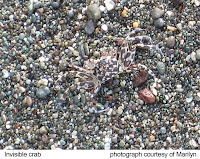 crabs that became instantly invisible when they stopped on the sand; a tiny cicada that landed on Jocelyn's white shirt and made itself at home; feisty scuttling hermit crabs; and lastly, a gorgeous blue morpho butterfly with brown underwings.

When a morpho's wings flap up,

the brown undersides blend into the scenery and it disappears. When the wings go down, the iridescent blue catches the sun like a turquoise neon sign, and it reappears as a blue flash ~ only to disappear when the wings flap back up. Morphos also fly an erratic course. Instead of flying in a straight line so a predator can easily catch them, they dodge from side to side while flashing brown and blue. Hey! Hah! Catch me if you can! We were fascinated.

Marilyn is a butterfly aficionado, and tried in vain to catch a morpho on video. I've linked to a short video here, which I found online, so you can see the effect.

But finally, we settled on

a scene near the north lagoon (see yesterday's map) and sat down to create our assignment, which was "a beach scene in color, with foliage, a close-up of some item found on the beach,

with some journaled comment/s." We spent a contented couple of hours on our pen sketches, then recorded the scene with our digital cameras so that we could add color later on. We could have added color at that point, but hey, it was pretty warm out there, and we needed to catch the tidepools before the tide rose back up too high.

So, hot under the midmorning sun, we trekked half an hour or so to the other end of El Remanso's long, footprintless stretch of beach to the tidepools, where we commenced to strip down to our swimsuits (and that colorful underwear again) 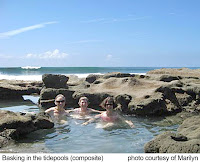 to burble up to our chins in the jacuzzi style pools. Every few moments the returning tide would wash white foam into the pool, refreshing and cooling the warm water -- it was heavenly. Marilyn managed a timed photo so she could set the camera and fling herself into the pool to be with us in the picture.

When we'd gotten enough sun and surf, we all dried on my huge (but folds up tiny) travel towel ~ what an excellent purchase THAT was ~

which I then hung on a branch of the beach almond tree to dry (it did, within an hour).

Marilyn and Jocelyn headed back around noon as they had planned, but I had brought a granola snack,

as I had planned (when I travel, I carry a whole bunch of these for emergencies and, well, hedonistic pleasure. The lodge would have provided a bag lunch, but I DO love my granola bars!). I plunked down in the shade of the big rock to sketch and journal. Later I went down the beach, turned in at the waterfall creek lagoon, and went up to the waterfall.

After walking up the creek for a few minutes, admiring the heliconias along the bank and hearing scarlet macaws overhead, you start to hear the rush

of the waterfall. It plunges (I'd guess 40', but I could be wayyyyy off) into a small, dim grotto, very private, and you can stand under the deluge in water up to your calves, and let the water pound your shoulders in a totally satisfying aqua-massage. Heavenly. (okay, okay, I confess to airbrushing on that charming bikini!).

Later, after I'd returned and taken a short swim in the

pool, we all gathered at Jocelyn and Marilyn's cabina to work on our beach scenes and then critique them. They critiqued mine, as well, which is always helpful and properly humbling to an instructor. We teachers need critiques, too!

page wasn't finished that night, she has since sent me this photo for the blog. Before dinner that night, we shared our journals with the other lodge guests, laying them out on an empty table. They were a real hit, with a constant stream of admiring viewers until Elyer and Michael began bringing the food.

I guess there's no competing with fresh-caught-tuna steaks and mashed juca (tastier than potatoes!), with green beans, the plate decorated with an artful arrangement of julienned peppers and fresh jicama formed into a delicate flower; and finally, a tasty flan dessert with caramel topping. Oh, the food at El Remanso is always delicious! We would eat until we could eat no more.

The workshop was over now, but the journaling definitely was not. The next day we would have the entire day to

explore the forest and beach and have more adventures, which we would then journal with abandon. See you then!

What a fabulous arm chair trip I just took while roaming your blog. The drawings made and posted here are truly treasures. I whole process took my breath away! :)

Hi margaret ann,
It's a nice armchair trip for me, also. When I write about it and put the images up, it's like I'm doing it all over again.

I'm glad you are enjoying it, too.

Loved the camoflage of the invisible crab; that was amazing. Did not realize that one could airbrush bathing suits on to a picture like that. Also enjoyed the two different interpretations of the beach scene and how both did a nice job of simplifying (interpreting) the actual scene. I will be waiting with baited breath for your next trip so that we can see more through your blog. Enjoy it immensely.

Hi Kirk,
We really got a kick out of that crab. The frog on the trail was well camouflaged, too, as you probably noticed. Hermit crabs, when they aren't a-move look like beached seashells. It's a jungle out there! And life is not always what it seems!

The bathing suit was done in Photoshop on a layer. If I turn off the layer, Voila!

I am always fascinated by various interpretations of a given scene. They are visual representations of how our other types of opinions can also differ, with unexpected nuances and readings of a given situation. Makes ya think, huh?

I still have some journaling to go on this blog, so stick around a few more days.