We were all getting dangerously accustomed to being pampered. Meals at El Remanso are always

gorgeous and delicious; we were waited on hand and foot by friendly, competent staff; our rooms were tidied as soon as we left them in the mornings; lovely drinks were brought to us by the pool in the late afternoons as we watched the sunset or swam; beautiful, fascinating, and intriguing things to sketch and journal about were all around.

What more could we possibly wish?

This morning at 6:30, Marilyn and I went out to see Jocelyn and Kathy off as they zipped out on the zipline to Gerardo in the huge old canopy tree for breakfast. There, for more than an hour, they absorbed the wonder of their eyrie, sketched, and ate their breakfast seventy feet above the ground amid singing birds and passing monkeys, coming back later with slightly glazed eyes and faraway expressions. Here are a few photos of their experience:

And here are a couple more.

Since this morning's class was expressive writing -- paragraphs, haiku, poetry, they had a perfect subject for their musings. We focussed on making an attractive page with evocative writing (as opposed to terse mutterings), then moved into haiku, which pleased everyone. Here's a haiku from each, seventeen syllables, nature subjects, two ideas, one short and one long, and both related:

They were all very pleased with those, as well they should be.

While they were quietly meditating, scribbling lines, erasing, and chewing off hangnails, I got a chance to do a few of my own ~ actually, I'd gotten up with the howlers early in the morning and had dashed off a whole string of them around sunrise. But I did some more in class.

I think those haikus are quite adequate (see on the journal page), but I know that a Japanese poet might spend days on a single haiku, so I realize that mine/ours could probably use some polish. Still, they dress up a page amazingly, much the same way a little sketch does.

For instance, my little haiku:

lends itself to my little drawing of flying macaws. Two of them had passed overhead as I was haikuing earlier that morning, and I wanted to commemorate it.

After we had experimented awhile with the haiku, we tried some short poetry.

This was fun, as well, with the whole class getting a bit bawdy as we put some of our experiences into 4-liners. After introducing the concept and helping the students with meter and cadence, I worked on a little poem to fill the empty spaces on my journal's Magnificent Frigatebird skull page (another good use for a poem ~ to fill an empty space).

After lunch, we got to the calligraphy part of the workshop. Jocelyn, who has produced calligraphy greeting cards, hangings, logos, and other professional projects, had offered ahead of time to lend her expertise to this section of the class, and I was delighted to have her input. My calligraphy is somewhat plodding ~ I know the basic principles, and I can make recognizable calligraphy letters, but my main thrust in calligraphy has been to use individual letters as initial caps on pages. 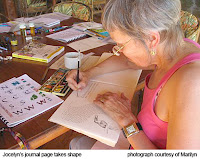 ~ I realized that I should leave the teaching of this ancient craft to professionals in the future. Marilyn is quite capable in calligraphy, as well (see her haiku, above) , and even she far outshone my feeble efforts (you'll see an example of mine in tomorrow's blog ~ try not to be cruel).

THEREFORE. I have decided that in future classes,

I will be teaching my new Organic Vacation Font, which I freely admit is a take-off on the hand-lettered font created by Danny Gregory, my hero and fellow journalist who wrote The Creative License, Giving Yourself Permission to Be The Artist You Truly Are. The great thing about this font is that 1) you can make it look any way you want it to, 2) you can't get it wrong, and 3) every time you make a letter it can look different (look at each "a" in the example ~ and that's just a sample.) I hope Danny doesn't mind, but I had just discovered its unique character and was using it in my journal for this trip. I highly recommend his book, by the way. It is chock full of ideas and concepts to help you become a versatile and accomplished journaler. He has written and illustrated numerous others, as well

The Organic Vacation Font is the perfect font to dress up a journal, and it really lends itself to a carefree, fun vacation narrative. I'll teach that, but I'll also have some nice calligraphy examples for those who like a slightly more formal look. That's still in the development stages.

As I mentioned yesterday, I learn from my students, and I think I learned quite a bit during this class day.

We finished for the afternoon and went our separate ways to hike or swim or to sketch and journal. I spent some time quietly meditating, sketching and writing on the yoga platform, then watching Gaia turn the lights down. A tropical sunset is a very calming experience.