Morning starts early in the tropics, in our case this first day, it started quite a bit before 5:19, when the howlers started up.

Around 4:30am, a muffled "knocking" started up out in the forest. It was obviously a call of some kind, but it wasn't until later that Gerardo, the lodge naturalist, identified it for us as a Pacific Screech Owl. I have screech owls at home and they sure don't sound like THAT. I wonder how they make that odd sound....

Then howler monkey roars began rolling through the dark air, and it was time to rise. There is something "right" somehow about the howler calls. I feel resentful about my alarm clock going off at home, sometimes, but I don't get upset with the howlers, even when they start up at 4:30am. It would be like getting upset because the sun rises. Dang!

I was restless this first night, anyway, and had gone out to sit on my veranda at 3:30am, to admire the stars shining through a sparsely-leafed cecropia tree and look for the Southern Cross constellation. A haiku came to me:

To be perfectly honest, I'm not certain I actually saw the Southern Cross there, but it made such a nice haiku I couldn't resist. Oh well.

This first day was one in which I wanted to get acquainted with my students (the first two, Jocelyn and Marilyn, at least ~ Kathy was scheduled to arrive the next day, the first day of class.)

After breakfast, during which Gerardo set up the scope on the open deck of the restaurant and we began seeing tropical birds close-up, we started off down the trail to the beach talking and stopping to admire frogs, butterflies and flowers.

It was a beautiful day ~ the first of many,

and we each went at our own pace, scattered down the beach. Patrolling the spindrift, I surprised a coati (in Costa Rica it's called a pizote ~ say "pee-SO-tay") digging up a sea turtle nest and eating the eggs. I got some terrific photos, and hoped it would wait for Jocelyn and Marilyn to come along, but all they got to see were the deep hole and scattered leathery eggshells.

I think now might be a good time to talk about some journaling principles. There are many schools of thought on how to make journals, and I subscribe to the tenet "It's YOUR journal; do it however you please." When I create a journal, I want it to be a record of my journey.

For instance, consider this pizote raiding the turtle nest.

It certainly wouldn't have stood still for me to draw it at its nefarious task, so I took several photos, then later that day I drew the scene from the screen on my camera. I feel fine about putting things in my journal ~ writing, drawings, ephemera (stuff that gets glued or taped in) ~ that I have actually experienced. Sometimes I leave an empty space if I can't add something in the moment, and go back to it later. Sometimes MUCH later. Maybe, even, after I return home.

Additionally, I have decided that in my journals,

it's okay to use resource photos, even ones from magazines or online, to decorate a page if I actually experienced that scene myself. For instance, I drew the flying toucan in the clickable journal page above just this morning, using photos I found in my files. But I actually saw this particular kind of toucan flying from a tree exactly that way, during this trip. To me, that is valid journal stuff. Others might have a different journaling ethic, but that's mine.

Design is important, too. On the page with the "band-aid," above, I journaled the text into a freeform shape, leaving room all around it for adding drawings or ephemera later. Later that morning, I added a quick sketch of the zone-tailed hawk. Other things were put in later on. A journal like this can't be planned out entirely in advance, but it adds interest to vary the page design, and text is one area in which you can quickly give it shape.

After a leisurely paddle in the sun-warmed potholes at the ocean's edge,

I sat in the shade of a big black rock and sketched the beach. Later I walked about 500 feet north, turned around, and sketched the big black rock from the shade of one of the palm trees in the first picture. The two pages face each other in the journal, making a great visual reminder of that marvelous solitary place. You'll notice I added watercolor pencil color to one of them, but I haven't gotten around to coloring the other. I might not. If you look closely at the colored one, you'll see that the final golden sand coloring wasn't painted in ~ I like the pencil texture; it makes believable sand.

This initial trip to the beach was part of my workshop preparation. I like to prepare personal examples 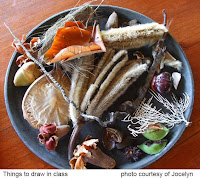 of what I ask from my students, so the sketches were examples of the sorts of things they might decide to sketch. Additionally, I wanted to collect things for them to draw in the classroom.

So late that afternoon I started back up the path to the wildlife lodge with a bag full of goodies for the first class, tired from jetlag, a long day sketching in the tropical sun, and the half-hour climb up the steep trail ~ but supremely happy and satisfied with my first day at El Remanso.
Posted by Irene Brady at 4:08 PM

i like your sketch of the pisote ( i got bit by one when i was in Monteverde...which entailed a trip to a doctor's house by "ambulance" where I got stiched up and put on antibiotics!)

Thanks Alanna. That's one of my favorites in the journal too. He let me approach to within about ten feet before he ditched and ran, but from the look he was giving me, I think he WANTED to bite me.