Just a quickie note: I am still in the process of learning how to use PayLoadz (which allows you to download my e-books) and just yesterday I discovered the "test delivery" button, which allows me to test what happens when you pay for and click on the download button for one of my workbooks.

I was nonplussed to discover that the watercolor pencil workbook, 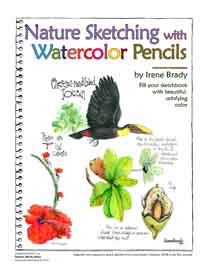 which is pretty large, downloaded as two files, one with a .PDF with zero MB in it and the other with a .PART extension on the end. Neither one would open into the Nature Sketching with Watercolor Pencils workbook. I was very distressed, and went back to reload the file because there was obviously something wrong with it.

Imagine my amazement when I later came back to my download directory and discovered that the two files had merged into one! The .PART file was gone, and the .PDF file was full of good little bytes! I tried it again, and sure enough, it appeared initially as two files, but resolved itself after several minutes into a single workable download of the workbook, which opened perfectly in Adobe Acrobat.

So just in case this happens to you, smile knowledgeably and go get a cuppa, or dust the windowsills or something and give it some time to get itself together before you go bananas (like I did). It's a BIG file, and it apparently just take some time to squeeze itself through the funnel into your computer.

So that's my take on downloading big files ~ and it's really all we need to know, huh?
Cheers!
Posted by Irene Brady at 3:04 PM