With just a little time left,

we tried to be philosophical. Our plane was to leave mid-morning, so there was time for Gerardo-the-driver to take us in the lodge Land Rover to Puerto Jimenez a little bit early to see the town. 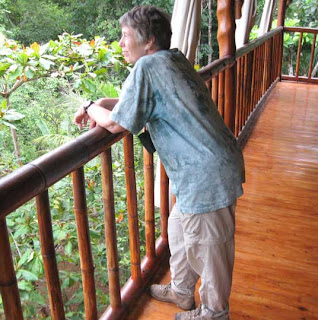 I went out to find my last "gift" from El Remanso, and discovered this lovely, lacy mushroom right at the edge of the restaurant entrance.

Then it was time to say goodby to all the good people there, and Gerardo and Dan talked at great length about seedlings and compost because Gerardo is preparing a photo/description listing of all the plants and trees found at El Remanso. He plans to collect seeds and raise seedlings to reforest surrounding areas and to plant where needed. It is an awesome project, and Dan wanted to make sure

Gerardo's seedlings would have the best chance to survive. Since Dan started Plant Oregon native plant nursery many years ago (and still owns and runs it), he has a lot of expertise in that area. We also said goodbye to Maekal (in the photo), who waited on tables with grace, skill and humor during our stay.

Then we hugged Adri and Danni goodbye and it was time for Gerardo the driver to take us to our plane. It had rained

quite a deluge the night before, and we had to ford several streams, one with water up to the runningboards on the Land Rover.

As always, I was much taken by the cattle, and

Gerardo stopped at one place so I could jump out and take photographs. Gerardo the naturalist had said the Ticos call these cows "Jerseys," but I can't think of anything less Jersey-like (real Jerseys ~ the ones from the Isle of Jersey ~ are colored like deer, have dark soulful eyes, and are about 2/3 the size of these honkers! This is a former farm girl speekin, and I know whereof I speek!).

these cows thought I was the one who looked pretty funny ~ you can tell by the expression on their faces....

At length, we made it to Puerto Jimenez, and Gerardo took us out to the Parrot Bay sanctuary, an inlet in the mangroves, open to the ocean. I had no idea there were crocodiles there. Be sure to look at this image close-up if you wanna see a real corker of a crocodile "smile." By the way, in my book The Southern Swamp Explorer (it's being set up to print as we speak ~ I'll receive a copy to proof next week!) I have written a little ditty to help one distinguish between crocodiles and alligators. Here's how:

A 'gator's nose is short and wide,
and hides the lower teeth inside.
The skinny nose of a crocodile
lets teeth poke up outside its smile.

Dan and I snapped photos of the croc (that's Dan's photo above) and some smaller caimans ( a type of alligator) and the egrets in the cattle egret rookery, and I briefly saw a boat-billed heron (yes!).

But by now, it was time for our plane to leave, so Gerardo toted us back to the airport to catch our plane.

I snapped a picture of Pto. Jimenez and the mangrove swamps just after we left the ground. I think

Parrot Bay may be at the end of that little finger of water entering the mangroves at right.

Air planes are great fun, and fly low (unlike Sansa flights, which fly WAY up high), and we had great views nearly the entire way.

The rest of our flight was the epitome of what you wish flights weren't ~ long, sleepless, cramped, blah, blah...although there were a few light moments ~ see the pilot washing his windshield at right and the cigar-maker

plying his trade in the San Jose airport.

I was too tired (and blue) to sketch, and at 26 hours, the flight was a tad too long.....(read the journal page for more gory details). But Dan'l and I managed to not get too cranky, at least not

with each other, and it went as well as could be expected, although it took me a full week to recover after we got home.

And in the end, this final photo which Dan took just before our waterfall visit encompasses my memories of this lovely trip, so the icky ending didn't have any permanent effect.

So there you have it. By the way, I'm going to visit the director at The Oregon Trail Interpretive Center next week to line out just how we want to run the workshop I'm doing for them in October.

When I have a plan, I will blog about its construction. If you want to be notified when I start, be sure to click the box in the right column that sends you a notice when I blog. It's a lot easier than trying to remember (then to find the blog address) to come and check.