and we didn't leave until the NEXT morning.

On THIS morning, after a 4:45 wakeup call from howlers then a visit by macaws, of which Dan got some darkish photos (hey, the sun was barely up, and it was cloudy!) Dan'l and I had one last pilgrimage to make ~ to the waterfall and grotto where you can stand

beneath the falls for a wonderful drubbing. So I guess you'll have to put up with one more day of blog entries!

trotted down the steep trail after stopping to greet a couple of the fine women who clean our rooms daily, sweeping out the debris we track in, cleaning out the ant moats (see the ant moat on yesterday's page) and making our beds. Then down past where workmen are building a new cabina, carrying heavy beams and roof panels down

on their shoulders and wheeling bags of concrete down by hand so as not to create noisy construction to disturb the guests and wildlife in the surrounding rainforest. They'd been working since sunrise, and were taking a break when we arrived.

Here's the trail just before it lets out onto the beach ~ you can hear the surf rumbling, and the breeze comes freshly up

the ravine at this point. It's only a short distance down the beach to where the waterfall stream comes out to the ocean, and shady 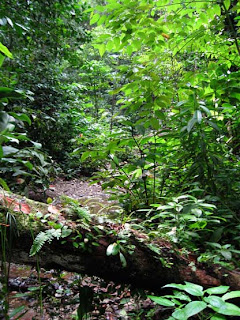 this early in the morning.

We passed the coconut grove at the mouth where tides have washed in coconuts, which subsequently sprouted and grew, and headed upstream. Inside the ravine, it is cool and moist, with braided strangler figs climbing trees, heliconias sparking red in the dimness, and a morpho butterfly

flip-flopping (blue~brown~blue~brown) ahead of us (we never DID get a picture of one ~ they are beastly difficult to photograph!).

The air quickened as we approached the falls, which is about 70' high. The water spills over black rocks, splits into two main strands, and drops into a sandy, knee-deep pool.

It is daunting to consider stepping under this deluge, but it's worth the trauma. If you stand under one stream you get a great massage of smallish water drops. They drum mightily on your head and shoulders, and if your rump sticks out they pound there, too (that kinda hurts, so one's posture improves under this waterfall). Standing under the other strand, you get a real thumping by larger drops.

I could only stand under the strong side for a few moments, but Dan loved that heavy drubbing best. We took advantage of the free massage for a long time, although there was always the possibility that a rapelling group might come over the edge and catch us in the altogether.

Finally, pounded to a pulp, I dried off with our microfiber towel (this is a terrific improvement over any other travel towel, by the way:

beach towel size, very efficient, and folds to 5x9x1" to carry back to one's cabina to dry out) and went looking for poison dart frogs ~ but I didn't spot any. I found one here in the past, a lovely blue and red one, but I didn't luck out this time.

At length, we ended up back on the beach, and while I winnowed through the beach wrack for treasures (see the lovely palm bark I found!) Daniel pulled out a couple of trash bags he'd gotten from the restaurant kitchen and commenced to pick up plastic bottles, flip-flops, and other things the storm had washed up on the beach. As I mentioned before, this trash was an anomaly ~ it's usually pristine on this beach, and even today there was far less trash than there had been the day before.

I was intent on

one last sketch, so I stood as far from the jungle's edge as I could and drew the scene up the ravine we had just visited. Occasionally the incoming tide swirled around my knees, and, intent upon my drawing, it was only chance that I refocussed and rescued my shoes a moment before they sailed out on a wave.

The photo is taken from closer to the jungle's edge, after the tide had come in, but you can SORT

of see what I was sketching. When drawing knee-deep in ocean, in hot sun, with a pen, the drawing might not EXACTLY reflect reality. Also, I had to make the tallest tree shorter when I ran out of paper room..... Still, I'm delighted with my beach picture because it catches the feeling of that beach and bit of rainforest. And it's nice to have the photo as well, because if I ever want to color this scene, I have everything I need to prompt me.

Dan stayed down on the beach for the rest of the day, 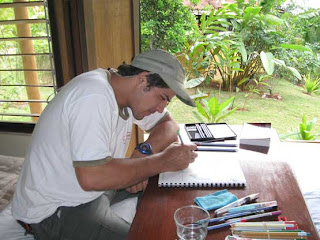 but I had one last mission. When I packed up for this trip, I had included watercolor pencil sets, pencil sharpeners, waterbrushes and workbooks for Adri, Eljer and Gerardo, and planned to do a workshop with them. Eljer, though, was working in Spain for the season, and we couldn't find a time Adri and Gerardo could both get together, so I ended up teaching Adri one afternoon and on this last afternoon, Gerardo. Both mini-workshops were very rewarding, and we were all pleased with the progress that was made. While Gerardo was working on his lesson, I colored in my journal. I think Gerardo can go far with his art if he practices.

The sun set as Gerardo was working, and after he left, Dan'l and I sat soaking up our last evening's worth of frogsong and cricketcreaks. A thunderstorm flashed lightning out over the ocean in a final lightshow for our vacation. We'd be leaving in the morning.
Posted by Irene Brady at 4:36 PM