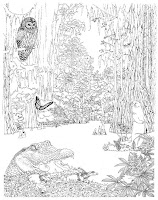 It was quite a journey, but I've gotten the ink all on the paper, the underlying pencil lines erased, and although it took two scans to get the whole thing into graphic files (which I then merged using Photomerge and some persnickety personal tweaking since it wasn't perfect), it is now the single image which you see here.

I thought you might like to see some of it closeup, so here's the owl, a bit larger.

Now I have some decisions to make. First of all, I know the ink is waterproof, although 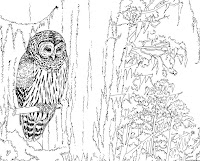 I don't know what would happen if I get totally carried away with the water. On the other hand, I don't want to do that anyway because this is on unmounted Bristol board, which is only a little heftier than the weight (and texture) of a file card.

So while I might be able to do some minor washes to get a soft background color in (the sky, for instance, and maybe the water), but I'll keep things pretty dry so the paper doesn't buckle too much.

There's always the chance I could muff it, though, spilling my jar of brush-rinsing water on it, for instance, or splattering it with a juicy pomegranite seed (not likely, but hey), so since I have it as a graphic I could take the file down to the local print shop (or Kinkos if need be) and have them photocopy it onto another sheet of Bristol, which I would take there with me for them to print onto -- in waterproof laser toner or perhaps there are waterproof inkjet inks, I don't know.

Then I could try again.

Who knows what's going to happen here. But at least I have a tentative ace up my sleeve for in case I blow it. After all, it did take several days to ink the thing and I'm running out of time to make too many runs at it.

My ARCs (Advance Review Copies) are due to arrive next Thursday, by the way, then I'll be ramping up to send them out to reviewers and authorities I know. I did get the Sell Sheet written which has all the nitty gritty information that's on the back of the ARC book cover, plus a synopsis and some additional nice blurbs I had handy.

For instance, one from the Boston Globe about my book Beaver Year which I've always cherished: "Beaver Year is the kind of book that will be passed from child to child and become 'dogeared' with affection." And one from School Library Journal about Wild Babies: "A baby-animal book sufficiently different to outclass most of the books of its genre...all ages can enjoy and learn from this book." Both well worth passing along when one is trying to garner good reviews for a new book.

Anyway, I'll keep plugging away at this painting. This weekend, though, tomorrow and the next day, I have a sketching workshop to teach. This one is an oddball -- usually I pull older ladies. This time, out of eight participants, I have one teenager, two twelve-year-olds, at least one woman in her forties, two in their sixties (I think), and a couple of unknowns. My last class was sixty and older. So this will be interesting, comparing the dynamics.