As promised post before last, here's the pictorial history of the making of the jaguar mural. It took me from April to December, start to finish.

As the final image to complete the set, I had planned to do a really stunning Mayan depiction of the Serpent God, which would welcome visitors to my house. 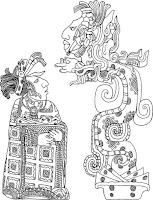 But after much thought, I decided that I wanted to welcome people with something of my own, something that spoke to why I am here in Belize -- to live in the tropical world with its amazing flora and fauna -- and while a Mayan representation would be really cool, it would be something Mayan which I duplicated on the wall.

Instead, I wanted the welcoming image to warmly greet people on my behalf, so I finally settled on a life-size realistic rendering of a jaguar, a potent figure in Belize life. 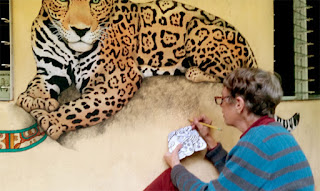 I went online and found a photo of a jaguar which looked kindly, welcoming but also protective, and graphed it as I had graphed the Mayan figures. Soon had a handsome jaguar penciled onto the wall (for more about that process, go here.)

All of the previous Mayan figures had been painted with vinyl outdoor paint on the cinnamon-colored natural clay walls of the house, but I’d discovered that the walls needed to be stabilized lest the paintings flake off within a few years. So I had painted (or rather, Freddy, my Sunday worker and I had painted) the house a lovely cream color, working carefully around the Mayan paintings 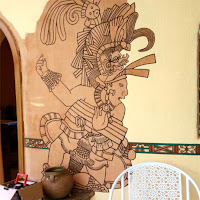 then varnishing the figures themselves.  all of the Mayan figures were finished, but since I hadn't yet begun the jaguar, I had Freddy paint over the large area where it would be before I drew it, stabilizing the wall and giving me a lovely, solid soft cream base for the painting.

The sky band, the colorful Mayan ribbon that connects all the figures, had two colors, cinnamon and ochre, which combined with the cream house paint could recreate the basic coat colors of the jaguar. 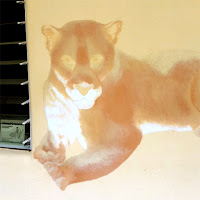 So using the house paint as a base, I mixed in cinnamon and ochre and began applying color to my pencil outlined jaguar image.  To my astonishment painting the jaguar the base color without any spots produced what appeared to be a North American cougar. 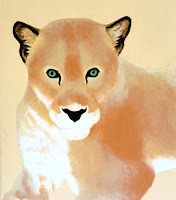 Spots really do mess around with perceptions.

The jaguar’s eyes came next.  I always finish the eyes first thing so that whatever I am drawing will come to life as soon as possible.  Jaguars, like  house cats, have variable eye coloring, anywhere from golden yellow to jade green.  I used the green from the skyband to give my jaguar a penetrating gaze. 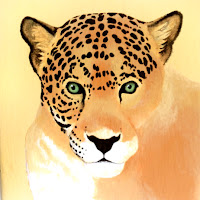 Adding the black rims to the ears reduced the cougar similarity, as cougar ears don’t have black rims. As soon as the tawny undercoat had dried I penciled in jaguar rosettes.

Every jaguar has its own spot pattern, plus rosettes on their sides -- small spots encircled by a ring of spots, so I didn’t worry too much about making my spots exactly the same as those on the photo. In fact, I changed things around to make it distinctly my own, while still being true to typical jaguar markings.  Soon the jaguar itself looked calmly down from the wall. 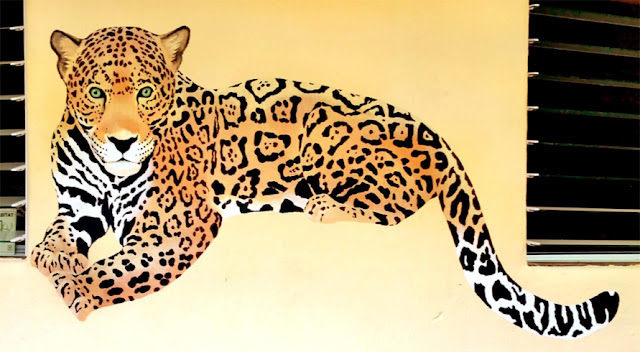 At first, it was one-dimensional, as I didn’t do any shadows or shading on it.  I let it rest for a while, watching it as I would leave and enter the house over the next few weeks, trying to decide whether to leave it flat or give it a 3-D effect, and finally I concluded that I couldn’t stop half-way. 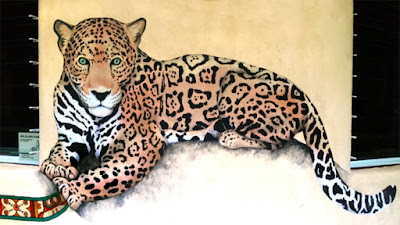 Using a dry-brush technique – which simply means dipping the brush in paint then scrubbing much of it away until when you apply it to the surface it doesn’t leave a solid swath but more of a misty shadow effect – I shaded the body until it finally looked about ready to come down off the wall to check out visitors.
Then I added the jaguar’s bristly white whiskers.

I finished the sky band that connected the jaguar to the rest of the house’s Mayan images, curving it around under the jaguar’s paws as though it were on a curved surface to lend depth to the mural. 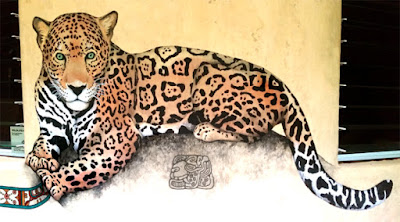 I didn't get around to painting the rock the Jaguar was presumably perched upon until just before Christmas, also adding a jaguar glyph I had sketched at the Gran Jaguar temple at the Tikal archaeological site in Guatemala in 2016.

I figure it took me about forty hours from start to finish.

The jaguar is approximately life size, and I feel he is a gentle guardian, checking out visitors to make sure they have good intent before letting them pass. I have discovered, though that he can apparently make himself invisible.  When people come to visit, I usually greet them at the edge of the walkway, welcoming them and inviting them in.  With their eyes on me, they pass so close that he could reach out and pat them as they enter, were he so inclined. If they DO see him, they always stop to admire him, so I know whether or not he is wearing his invisible cloak. 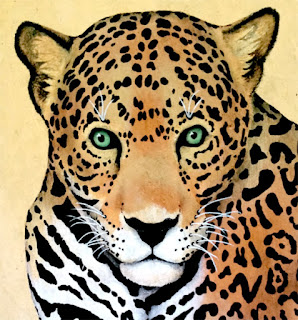 Being a bit of a mischief maker, I ask ones who didn’t stop if they saw the jaguar on their way in.   Guests who had their eyes focused on me instead of the big cat look at me in puzzlement, so we return to the entrance, and they are amazed to see the VERY visible and imposing jaguar gazing down at them.  It’s a kind of magic.

The murals are finished now, although the Belizean kids who use the veranda for a study hall have been urging me to paint a jungle behind the jaguar.  I have to admit, it would create an amazing entrance, but it would be a huge task and I think I’ll rest on my laurels.

I have some other things on my platter, such as working in my sketch/journal; adding amenities to Micasa, my little retreat in the jungle; and lighting up neighborhood houses.  This last project is being very rewarding and maybe in my next post I will show you what I’ve been up to.  You’ll be particularly interested if you helped me out with the project when I was in Oregon last summer.


Until next time…
Posted by Irene Brady at 6:26 PM