South Africa (after a wood-gathering glitch) 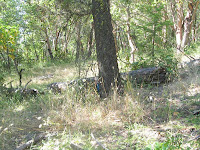 I had every intention of blogging about South Africa yesterday, but summer is almost over and I needed to start pulling in wood out of my forest to burn in my woodstove this winter.  Years ago a reforestation crew cut the hillside's dead trees and shrubs into 6' (2 meter) lengths and stacked them in piles out in the woods. I can handle the pieces smaller than about 7" in girth.

"Pulling in wood" consists of putting on gloves and looping one end of a sturdy nylon strap around one end of a piece (or several small pieces) of firewood. Then, laying the other end of the strap over my shoulder, I pull the log/s up, down or across my bumpy hillsides covered with poison oak, wild honeysuckle trip-vines and fallen logs, like a donkey in harness.  I stack them beside my road, where I can later heave them into Dan'l's truck to bring up to the house to cut into stove lengths.

I'm six weeks late getting started this year because of preparing to go ~ then going ~ to South Africa. So I started working yesterday morning before it could get hot.

Trouble is, I was far down the hill when I realized I had forgotten my gloves. It was a nuisance to go back for them, so I decided to work without them. That was a bad idea for two reasons. Poison oak grows tall and luxuriant in my woods, and there was another little problem I encountered when I lifted a log and uncovered the entrance of a yellowjacket nest.

Wasps came roaring out quite angrily (I can't say I blame them) and one of them stung me on my little finger as I gallumphed speedily away through the trees. My finger was so swollen and sore I couldn't type yesterday. (Excuses, excuses! But it sounds pretty convincing to me....)

At least I escaped a poison oak rash (so far). My good luck! So here goes, once again:

Beginning the tale of my South Africa Sojourn. 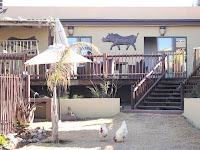 The plane alit in Johannesburg after an epic transoceanic flight of some fourteen hours, and I was picked up at the airport by MoAfrika Lodge, southeast of Johannesburg (the inhabitants call it Joburg), to meet up with Sandy and Joe of Coyote Trails School of Nature, later that day.

Eager to get started on my journal, I launched out the door to the edge of the lodge yard and managed a quick sketch of a Blacksmith Lapwing.  Then I made the mistake of patting the three Rottweiler dogs which live there.

Immediately, I was adopted as a fellow romper, and everywhere I turned there was a super-friendly dog waiting to gnaw on me.  Using a good bit of stealth, I sneaked out again and again, sometimes getting a few minutes to sketch, and sometimes not.

Imagine my delight at spotting two ibises that first day!  The first was a Hadeda (pronounce as in LA-di-DAH) Ibis, found anywhere there is water of any sort, and a Sacred Ibis, a big white bird that reminds me of our Wood Stork in the US. 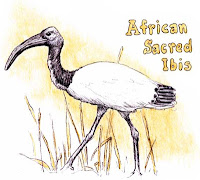 Sitting down to sketch the Sacred Ibis, I was overtowered by three dogs licking my face and chewing on my hand, my sketchbook, my knee, whatever!
I finally figured out that sketches would have to be roughed out quickly then finished from my digital camera screen in my room, so that's how this ibis sketch happened. BTW, the three dogs were named (I kid you NOT) George, Double-U, and Bush.

Sandy and Joe arrived in time for dinner, and the next morning we started out in our rental car for Moholoholo Mountain View Camp, some 200 miles to the northeast.

Here is some of the landscape directly east of Joburg.  As you drive, the rolling hills gently give way to higher hills, then you come out on the lip of the Drakensburg Escarpment, which drops down into the Blyde (BLEE-deh) River Canyon.  And that's where I'm going to drop this blog today.

Tomorrow, I'll get started on our ten day tracking/trailing/survival adventure at Moholoholo. Be sure to come back for the next installment of photos, sketches, and whatever strikes my fancy.  I'd love comments, if you have the time and will try to answer any questions you might have.

I totally identify with your decision about the gloves....in the garden I often tell myself it's not neccessary to make the trip to the garage for my tools...I'm ONLY going to do....and then it's too late!

Irene it's so nice to hear what you're up to...so much adventure as usual! I also bring in wood but not big pieces like yours. During winter I walk on my lanes and gather dry dead branches, bramble for kindling. It's a great way to get more exercise in winter and I dont have to buy firestarters any more!
Watch out for those wasps..I got stung last week in the ankle and it hurt until the next day.
Love your sketches as always!!
Mary