This illustration is progressing nicely, after quite a bit of research and tinkering, including some back and forth with the designer to get the placement and design to fit the subject, design, and panel dimensions.  At left is the first rough I did, which I think you can see in a larger size if you go back to the last post. Notice that the one I am working on now, below, has been changed a bit from the original concept, and is almost ready to move forward. Here's what has transpired. 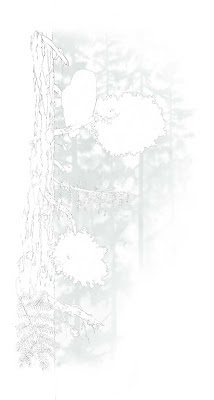 Some things have changed. First the left edge of the Douglas fir has been curved to follow a swash element inserted by the designer to divide some text in a panel on the left from the tree.  The illustration follows that curve.  Secondly, the position of the owl and one of the "witches broom" clumps have been switched, so that the owl is sitting a bit lower, on the clump's branch, and a typical Douglas fir branch (which the owl originally sat on) is in the space below.  Thirdly, a nearer branch with foliage has been added at the bottom of the picture. And finally, a background of fog-dimmed Douglas firs has been added.

What happens next?  Well, the original illustration was drawn on tracing paper. The background was rendered and added in my computer imaging program in a separate layer because that's the easiest way to do it. Then the two parts were combined in two layers so I can lighten, darken, or change either one without affecting the other.

The next step is to print this combined image out on heavy, smooth Bristol paper, and continue on with my ballpoint pen and watercolor pencils. The lines are fairly light, and can now be worked over with pen to good effect.  Then I will color the entire illustration with the watercolor pencils.

Since the illustration's size is 8½" x 16", I had to create a "custom paper size" for the printer's menu list so it would print a piece of paper longer than legal size (14" long). So in the printer folder in the computer control panel I created a custom page that size.  When I print it now on my color deskjet, the background will already be there and I won't have to try to put it in behind later.  This is going to be a great time saver, and also will calm anxiety I might have about the possibility of having to redo something if I mess up the background...
The designer already had an owl illustration she wanted to use, so with the permission of the other artist, when I am completely finished with my tree I will scan that into the computer, insert the owl art digitally in my computer imaging program, and blend it with my tree art.

I can only do this because the other artist gave permission and because the artwork on the owl matches my style closely enough that it won't look peculiar.

The final blended result will be sent to the designer to combine with the rest of the sign. 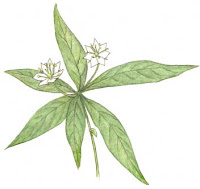 In the meantime, while we were thrashing all these details out, I also did a spot illustration of a Starflower, Tridentalis borealis.

One of the considerations on such a project is that all the art must fit together well, so I had to pay careful attention to the other artist's style while creating the starflower.

As usual, when doing such an illustration, I had to use photo resources which, in this case, consisted of about five different photos. To avoid copyright infringement, you may not "copy" someone else's photo exactly without their permission, but if you use several sources and your end result doesn't look like ANY of them, there isn't a problem.  My goal, always, is to create an illustration which no photographer would ever even be suspicious of. To do that, and always being sure that my changes remain true to the subject's species requirements, I might change the number and size of leaves, their angles, their color and shading, the attitude of the flowers (in the case of a plant), or add or subtract something where possible. So far, no one has ever complained, and I plan to keep it that way.

Thanks for illustrating what's it like to work with persnickety clients. You'd think they would have told you about the extra text box in the beginning!