A new sketch/journaling trip in the wings!

Summer is over, alas, but I made it last as long as I could after it got chilly, going out to sketch and journal in my fleece hoodie, long underwear, leggings 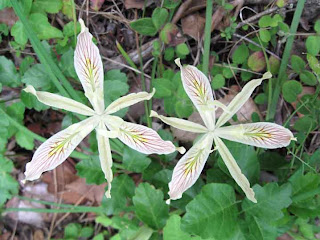 (the longies inch away from the socks sometimes so I cut the feet off an ancient pair of knee socks and bridge the incipient gap with the warm tubes), sitting on my canvas chair swathed with a fleece blanket.

I can get an hour's worth of sitting and reflecting, observing and sketching outdoors at 40° with this set-up if it's calm and sunny. But it's a stretch, and to be honest, I guess the daily sketches are a thing of the past for this year. I'm inescapably a fair-weather pleine air sketcher. Foo.

Well, that means I will be eager as a spotted pup to get outdoors in the spring, and when the morning sun shines through shooting stars and fawn lilies (above) out my window 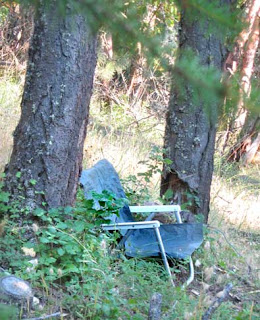 Yesterday I finished uploading my most recent set of Oregon forest-life sketches, the October-November set. You can get to the others by scrolling down to the links below the images on that site.

But in order to try to keep the spirit of summer in my studio, a couple of weeks ago, before it got really cold, I bought a 5-gallon aquarium (that's 16" wide, 8" front to back, and 10" tall) and positioned it in a spot where I can belly right up next to it to observe. I poured about a gallon of coarse sand in the bottom, and placed three lumpy 4-6" rocks along the back side to give it some character. 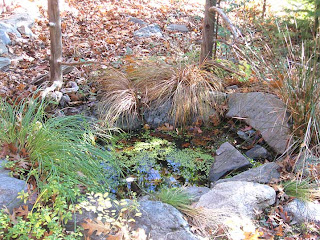 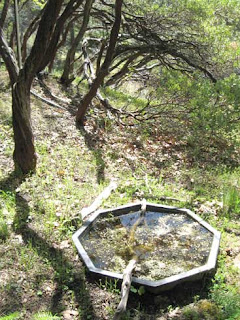 Next I took a bucket and a yogurt container out to my little pond and my wildlife water tub, and dipped up about 3 gallons of water, various pond weeds, and several containers full of mud and goo from the bottoms of both, making sure to dig down deep enough to collect whatever might have burrowed down a ways.

Bringing this slop back into the house, I dipped it all into the aquarium being careful not to disarrange the sand in the bottom. What a dirty mess it looked, all silty brown water and gloomy water plants lost in the murk. But by the next day, it was a gorgeous little miniature pond, with the lamp shining 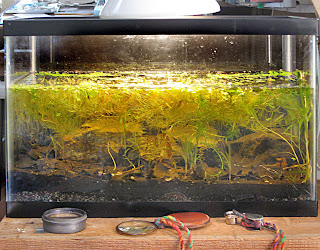 I often stop and observe it for a few minutes as I go from my studio to the kitchen for a cuppa, admiring the way the duckweed is sending down long roots to try for the bottom, the strap-like valisneria sending up leaf blades, the coontail growing like crazy (I'll have to start pruning in there soon or it will be packed solid green!).

And all the crazy creatures! Rising up out of the mud are little 2" worms which wave back and forth like cobras. There are limpets on the glass, and if I search carefully I can find them moving snail-like on the rocks and plants, their soft innards protected by a conical lid. A large (1/8") water mite zips around in the water like the energizer bunny-cum-schoolbus, a nearly-square bundle of frenzied activity. It gets its food by sucking the juices from little waterfleas, which sometimes come to rest on the glass ~ I saw it happen! If you sit back and squint a little, the aquarium looks like a little forest scene with lots of little waterfleas, ostracods, amphipods and copepods buzzing around like insects.

There are also CLAMS in there. I've no idea where they came from, but they're about the size of my little fingernail, and they move along by sticking a foot out of the shell and hunching along. The water is pretty cool since I only heat the part of my studio 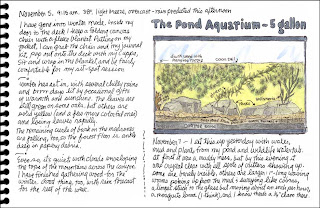 that's under my computer desk, so they're not very active, but it's neat to watch how they move from spot to spot, day by day.

Of course, I can't sit and watch the aquarium all day every day, and I'm already tired of this cold weather outside, and Christmas is a'cumin in (a good thing to avoid if you aren't with family) so I am in the throes of planning for my next sketch-journaling foray ~ this time to Belize.

Choosing Belize was an accident. I was planning another go at Hawaii, to try another island. I've been on the Big Island now, and Kauai, and I was aiming for Maui or Molokai, but I didn't start looking until November when the prices had already started going up. Way up. So with some consternation I started checking airfare to other places of interest, and finally snagged a flight to Belize for only a little more than half the price to Hawaii. It was a freak price, and was gone within a couple of hours, so I was lucky to find it.

So now I am starting to pack. This time I have gotten smart and ordered a wheeled pack, so I 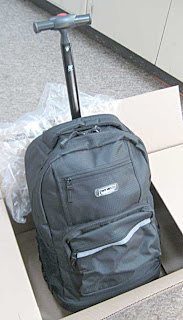 can carry it or pull it. In the past I have exhausted myself hauling my pack around on my back. Sometimes in airports with slick floors I would end up dragging it behind me (that's hard on packs and really tacky-looking to do) because I just couldn't carry it another step. It's not that it's so heavy, it just gets heavy after what seems like trotting miles from one terminal to the next when one has already been traveling for 20 hours with not much sleep. FedEx just brought the new pack this morning, and it appears to be the luggage of my dreams. It's considered a kids' schoolbag, so it's fairly small and lightweight, but although it was inexpensive, the online reviews were good and it looks like it's well-constructed. Now I can begin to get ready in earnest.

It's time to line up the house-sitter/s, get my clothes and sketching gear in order, and I'll be ready. I've already chosen and paid for my accomodations: four days on Ambergris Caye and eleven at a jungle lodge in western Belize on a calm river near Mayan ruins.

This is another bold jump for me, so it's a little scary. When I went to the Amazon last year, I was cared for from the moment of my arrival in Peru ~ picked up at the airport in Iquitos by my eco-lodge hosts, carted off down the Amazon to the lodge in their launch, and later returned by them to the plane for my trip home. I felt very safe. This time, I have made all the arrangements and have to find my own way to my lodgings via ferryboat and bus. It's daunting, but I'm sure I can do it.

Belize is a good choice for this: the official language, if you can believe it, is English. The Belizian currency is 2BZDollars = 1USDollar (simple!), and there is a good solid tourist industry infrastructure which makes it easier to get around than in more remote places. I plan to rent a bike for my stay on the Caye, and I won't need a vehicle at the jungle lodge. The hosts will pick me up on arrival in the nearby town and take me back at the end to catch my bus

So my sketching is preordained: four days doing beach things 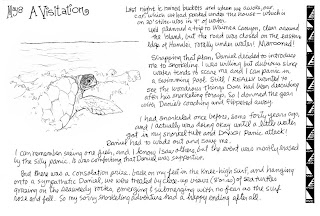 on the Atlantic right next to the world's second largest Barrier Reef, which is less than a quarter mile off the Caye where I'll stay. Maybe I'll TRY snorkeling again (after my embarrassing debacle on Kauai last spring ~ read this journal page for the gruesome details) in the shallow waters if I feel brave.

I have been assured that I'll be able to wander the jungle trails alone, sketching and journaling and keeping an eye out for snakes, howler monkeys and jaguars, of course. I wonder if I can take my pepper spray in my carry-on luggage?

I'm going to close down here now to start pawing through my summer gear for things to take to Belize. As always, I'll pack for carry-on only, so there's less chance of losing luggage, and I'll be trying to keep the weight around 20-25lbs. That means I'll have to rip up the Belize bird & wildlife books I just got, extracting and binding the pictures into a lighter-weight book, because the books together weigh 5lbs, a quarter of my goal! Also, I plan to take a dozen energy bars so I can skip expensive lunches and still make it through the day. The rest of my gear will be a change of clothes, my medicine bag (sunscreen, travel ailment remedies, mosquito repellent, etc.), a rain jacket, and my sketching kit.

I'll try to write more later, to keep you clued in as to how this is all going, in case you're planning (or dreaming of) a similar trip. Maybe you can learn from my mistakes!

Big hugs to all my followers!
Irene
Posted by Irene Brady at 10:34 AM

Glad to see you posting again and your trip sounds fantastic! I'll stop in to check out your slideshow when I have the time to sit and read each word. I like to take my time and enjoy your experiences.
Have fun on your trip. If I did not have a large family I would follow you to Belize...

Thanks Diane! Yes, I sometimes get sidetracked and don't blog for ages -- but I always enjoy it when I get around to it. Hope you like the slide show!