Goin' Off to Camp

I feel like a little kid, getting my gear together to go off to camp! 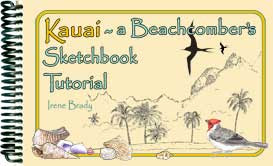 which has consumed my time for the last several weeks. I'm very pleased with it, but I'm glad to finally get it launched, because now I can go play.

Recently I joined the Board of Directors of Coyote Trails School of Nature, 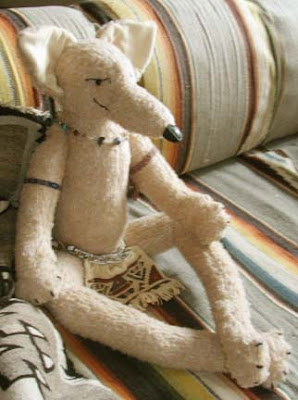 here in Ashland, which on the 4th of July translated into riding on the parade float and howling like a coyote at frequent intervals (there's nothing like being in a parade to let you throw reticence to the wind and be a Wild Thing). On the advice of my friend Otie, at right, I decided I wanted to experience some of the courses they teach, at their forest camp on the mountain above Ashland, and I have signed up for a couple of week-long courses in nature skills.

Here's what I'm to learn in this first class (the Fox Trail Adventure):
Wow! I will be a new woman! If you'd like to go visit the site, and maybe try this course yourself someday, here's the link. It's not just for kids -- they offer the same classes for kids and adults, but they don't mix the adults with the kids.

I've been checking things off their Supplies List, just bought a new tent I've been meaning to get for some time (whooeeee!) and I tried it out ~ on my deck. 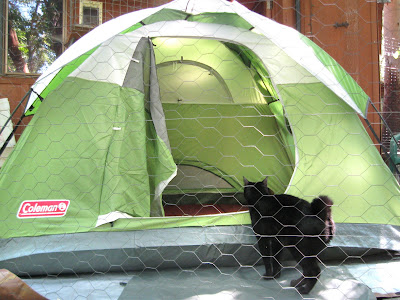 Hmmmm...by 3am I knew the 3" pad I was sleeping on was too hard, so I wimped out and came back in the house to get some sleep.

The next night I tried my 6" foam pad, which worked well enough that I made it through the night without too much waking up. Using a mattress is kinda old-ladyish, but I've no intention of disabling this faithful body any further than it already is!

Jesse loves the new tent, and has spent quite a bit of time sitting in its doorway looking out into the woods. Since he generally sleeps on my bed, I was hoping he could figure out how to nose in under the flap, but he couldn't quite figure it out. He yowled and complained, pawing fruitlessly at the flat, feet slipping down the nylon doorway, but he couldn't quite fathom stepping over the sill down there by his knees. Since there are skeeters out there, I couldn't leave the flap wide open for him, so in the end I had to shut him into the house so I could try to sleep ......foo.

I think the Wild Things approve of my sojourn. Friday morning a perky little gray fox trotted past my studio window, casting a sly eye my direction before moving on into the forest. And night before last, I was treated to the longest coyote serenade I have ever experienced.

And then......night before last, two coyotes bark/yodeling from about 200 ft out in the woods woke me up at roughly 2:55am, embroidering a dream I'd been dreaming. I listened drowsily for several minutes, then realized that this was going on MUCH longer than their usual 1-2 minute song (especially since they'd been howling for quite some time in my dream) and I glanced over at the clock: 2:59. I listened in amazement for 14 more minutes, the last little yip trailing off just a few seconds before 3:13. That's at least 18 minutes of solid bark/howling (no, none of the barking was dogs), plus however long they were going at it before it finally woke me up. WOW.
(If you're not sure what a coyote howl sounds like, click here and listen to #1 and #3.) 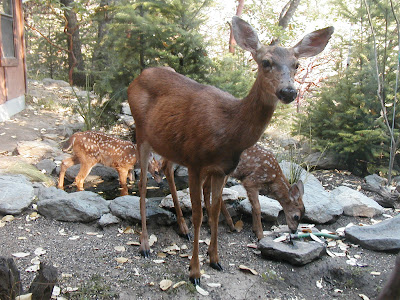 with approval of my forest mates, I am finished packing and ready to go up into the mountains to the forest camp where I shall learn how to blend with trees, walk like a deer, and live like a Wild Thing.

Now I need to finish the list for the house-sitter, then I'm ready for my camping trip. The weeds I joust with every afternoon down at the nursery will just have to grow without me.
Posted by Irene Brady at 4:26 PM