My New Store is Open

I worked on my new store in the 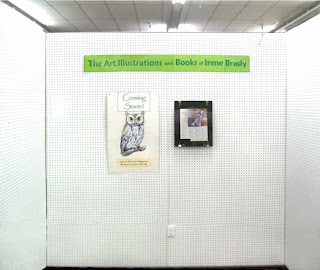 Ashland Artisan Emporium today from opening time at 11 to almost 3 (with half an hour off for lunch). I promised you a blow-by-blow, so here's what it looked like when I got there, if you recall from last week. 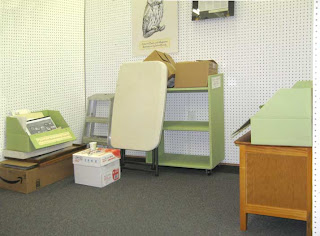 lent me his Montero, which has a big cargo space, and fortunately, I was able to pull up onto the sidewalk in front of the Emporium to unload. A passing True Gentleman offered to carry in the bookcase and the toy chest, and I thanked him profusely as I amassed a heap of stuff just inside the front door. Then I parked the car and came back to tote everything back to my space, about 70' from the front door.
Here's what I brought: 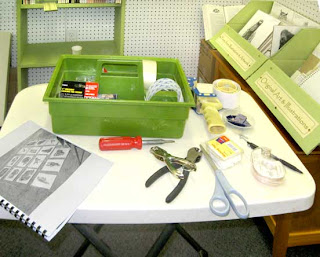 looked really confusing and imposing at first, so I unpacked the boxes of books into the bookcase to get started, then hung the mobile from a stout wire protruding from a pegboard hole and wired to a pegboard attachment. This mobile gives the booth some movement while being airy enough to not block the view. 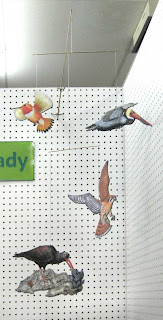 The birds are computer printouts of a painting I did, glued to black foam board and cut out closely, then hung on brass rods with fishline.

My first casualty was a hanger on the back of a large, heavy painting. The nail head was apparently smaller than the hanger hole, and it pulled out, leaving the hanger attached on only one side. So I unhung the promo piece which had supports UNDER it, and used the hangers for that to support the painting instead. 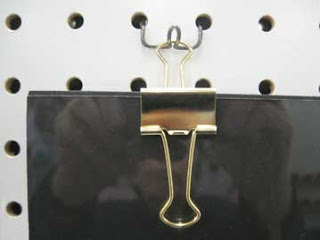 left the promo without a hanger, but figured out that I could unhinge one side of the upper two bulldog clamps and hang the piece from that (see the image at left).

I wanted to hang the book display boxes with the attached books/magazines next to their paintings, but the magazine containing one illustration was fragile so 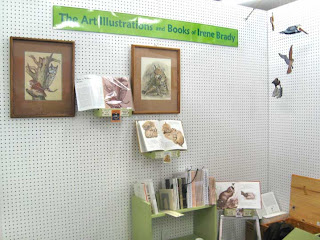 I had encased it in a plastic sleeve. At first I had hung it beside its picture, but that put it above eye level and the plastic sleeve glared from the overhead lights (see the glare in the image at right). Putting it below its picture resolved that problem.

Finally I had the main wall tweaked, and worked on the two side walls, putting up a display of prints for sale on one wall and non-illustration personal art on the 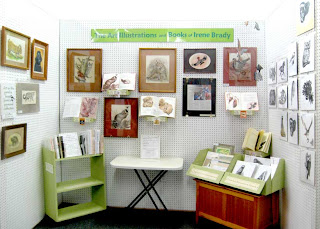 BTW, regarding business cards, I didn't put any out because I am pretty well booked up and don't really want to solicit work at the moment.

Here's the final result. I had brought the little table to work on, and also had the idea that I MIGHT use it for something, depending on how it looked. I really like it there in the center, even though it isn't doing much.

And it hadn't occurred to me until I was standing there, exhausted, just looking at everything, that if I put the bookcase and toybox/print containers in the corners at 45 degree angles, the booth would look much more welcoming and inviting, sort of like open arms.

So there it is. I think I'll redo the banner later and NOT laminate it. It won't be as sturdy, but it won't glare from the overhead lights, either, which would be better.

I have to go back tomorrow to fix the broken hanger on the picture, and I also think I'll take some Blu-Tack, which is a kind of sticky clay stuff to press under pictures that aren't hanging straight. By tomorrow they should be hanging as crooked as they plan to, and I can straighten them.

I am elated that I managed to pull this thing off without forgetting something major ~ or even minor! This has to be a "first" for me!

If you happen to be in the neighborhood, the Ashland Artisans Emporium is at 1670 Ashland Street, Ashland, Oregon, the main drag coming into town off the freeway. I'm in booth 116, and I hope you will stop by. I won't be there, most likely, but feel free to browse and see first hand how it turned out.

I hope this has been helpful. If you have any questions I might be able to answer, feel absolutely free to comment below and ask! I'm always happy to answer questions.
Posted by Irene Brady at 7:26 PM

Hi Irene!
It looks just great! I know how much work these kinds of set up can be, it's nice that you'll be there for awhile and not just one quick weekend.
I've set up for many things over the years and I can think of one or two tiny suggestions. Instead of having a toy chest that has a lid where you need to remove the boxes of prints to get at the inside of...Use something like lightweight tv tray tables or a small folding table WITHOUT crossed legs (like your other one) and then drape a nice cloth over the whole thing. A cloth that hangs right to the floor. Now you can store things underneath it; small containers of your supplies (scissors, tape, sticky tack, wire etc) or EXTRA prints for sale. Believe me when you get busy and you're fumbling around trying to move boxes and your back hurts, you'll thank me!
The little table you have would be better if it had 4 legs, not criss crossed, so you could (as i said before) put things under it and drape a long cloth over the whole thing.
My last suggestion, bring that table right out near the front and sit at it, facing out, try to stick out into the aisle as much as your allowed. THEN work on some art!! It draws people right over! Make sure you don't get engrossed but just dabble at something colorful and fun then people won't be afraid to talk to you. I used to do airbrushing too at the fair, nothing drew people over faster than setting right up and letting them watch!
WHEW! ok, hope any of this helps! Wish you luck!!
Mary

Mary, those are really useful suggestions. You are spot on, and thank you for your acute observations.

Actually, perhaps I didn't really clarify that the booth is not manned (womanned?). The booth is static, just waiting for people to come by and look. If they see something they like, they take it off the wall or table to the front desk where someone will take their money, record my name, item description and the price, and send me the money. The best thing about this place is that it is costing me $60/mo and I don't have to work at the desk (oh, praises BE!).

It remains to be seen whether that $60 is a good investment. The mall doesn't have a track record yet, so it's somewhat of a gamble.

I decided on the toy chest because it looks more like a table than a chest, and because it does have something on top of it which would have to be moved to get inside. I didn't want people thumbing through the artwork or prints I haven't set out, so I wanted things to be inaccessible and totally out of sight. The boxes of prints are quite light, so removing them isn't a problem.

If I were going to be sitting there, I think I would follow your suggestions to the letter, because you obviously have some tried and true techniques to optimize that situation. And thanks for the suggestion to put my tools/supplies inside the chest. I brought them home, but you're absolutely right -- I should leave them there so I can make improvements, fix problems, and repair things that get damaged when I notice them. I'll stop by every few days to see what needs replacing.

Thanks so much for your analysis. I'm sorry I wasn't more specific about the booth type, but in the end your suggestions are still useful and who knows ~ I may end up at the Saturday market someday, in which case I will know how to set things up most proficiently for that situation (and to do some art to grab peoples' attention!) Gotta get rid of all these pictures SOMEhow!

GREAT set-up! Wish I wasn't all the way acroos the country and could come! Are you selling any of your illustrations online? That little black capped chickadee illustration (or is it a print?) looks adorable! Let me know if you are selling any where online!
Debo

Hi Debo,
I'm sorry I never returned to answer this message! I haven't had prints for sale on my site, but I'll be setting up a page soon, so check back every now and then. I'll try to remember to blog it when I finish setting it up.

Thanks for the suggestion.

Congratulations! :D Your store looks great! I know how hard it is to set up a space, and it is kind of exhausting. Anyway, it'll all pay off. BTW, I love your theme color.