Okay, here 'tis.
I have before me three versions of my Oregon 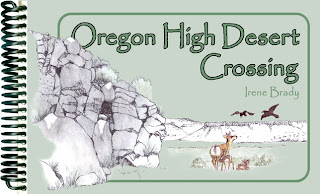 High Desert Crossing Sketch Journal. The first one you may have seen and/or downloaded within the last three weeks or so, the straight sketch journal of my May sketching/journaling trip across Oregon (journal WITHOUT tutorial). Click on the sketchbook images to go see their descriptions and/or order. 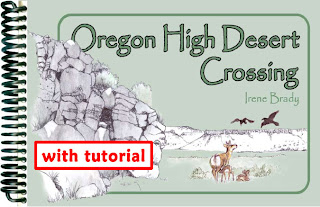 because several people expressed an interest, I've assembled a tutorial of how I did it (does that make it a "howdunnit"?) and inserted each howdunnit page across from its finished sketch page for a second version (journal WITH tutorial).

And THEN, since a) 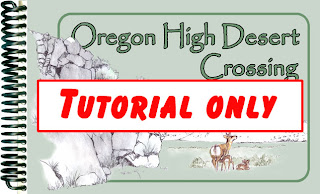 mebbe you downloaded the sketchbook hot off the press without the tutorial, or maybe b) you don't think you'll be wanting it but would like the option of changing your mind later, I'm offering JUST the tutorial (Tutorial ONLY), so you can add it to your journal if/when you decide you'd like both. You wouldn't want the tutorial alone, because it doesn't show the finished sketchbook page ~ that's in the Journal without Tutorial. aiieeeee!!!

So. If you'd like to see how it's done and you already downloaded the journal, now download the Tutorial and you'll find out how I approached each page, and the obstacles I overcame to do it, and even some of the booboos I had to fix (or just sob over quietly before turning the page). 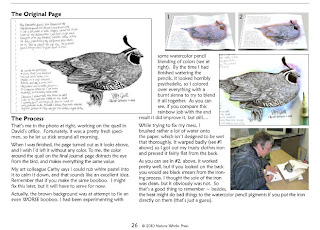 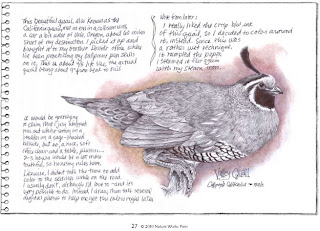 For instance, you'll find out what happened when I made some ghastly color choices for the background of this quail, what I did about it, what I wish I'd done about it, and what an artist friend suggested as an alternative fix. There's even a photo of me drawing the quail, to prove that I didn't just trace an image off the internet [grin].

Have I totally confused everyone? sorry! 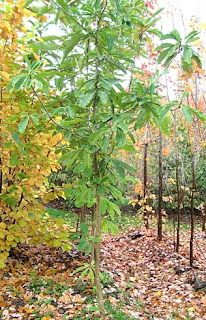 been easy to stay indoors this last week and work on this. Thursday and Friday it was 104 and 105 degrees (gasp, gasp), then Saturday and Sunday it was in the 60s and overcast (kinda not what you expect for August, and a bit chilly for skin accustomed to dry heat) then today it went whole hog and delivered rain drizzle at 50 degrees! Geez Louize! That's 54 degrees colder than it was just five days ago, in the middle of the day, and quite a bit wetter. I'm not complaining about the rain, because we really need it, but.....wow! And now I can't go get my daily fix of nirvana as I weed/prune/stake down at the nursery because everything is sopping and I'd get drenched.

After toughing it out for several hours this morning and saying "aw, c'mon, it's August!" I finally started a fire in my woodstove and at last it's comfortable in the house again. Maybe all the climate change poo-pooers will start to see what the climatologists have been trying to tell us ~ that global warming will deliver us wild and crazy weather, not just heat. 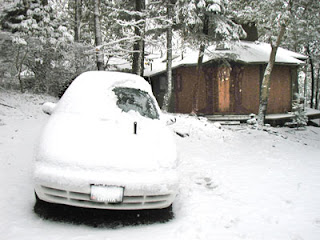 Oregon this winter. Good for the snowpack, which will melt all next summer to provide water for the streams, but not so good on my steep-hairpin-curves driveway, which will probably be too slick to skate down. "Cook up the beans and rice, Jessie! We done been snowbound agin!"

Enough digression! Come see my wonderful new tutorial. It was a joy to create, and I'm going to seriously consider doing tutorials for some of my future journals. And hey, if I get snowbound, mebbe I kin draw a snowflake collection. Huh!