Preparing for the Art Show and Studio Sale

This marathon started in September with the mapping out of how to do the show/sale (I keep a log ~ it reassures me I am actually DOING something at my desk every day).

PREPARATION
After selecting which pictures to sell, I scanned each one into my computer so that when/if it sold I would still have the image and the ability to make prints from it, even though it was long gone. It took a couple of weeks (well, there WERE around 300 pictures).

I am assuming you know that when you buy a piece of art you don't buy the copy rights unless they are specifically sold to you by the artist. All rights remain with the artist. If you copy the art or publish an image of it, you are infringing copyright. Didja know that? I made a little sign to that effect and will display it prominently at the show/sale. 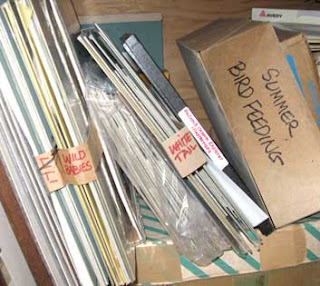 I've been illustrating for 30+ years and have HUNDREDS of illustrations just sitting in dark cupboards. Some hadn't seen the light of day for decades, pore thangs. It's going to be quite a show.

After selecting which pictures to sell (I still have hundreds left) the next step was to strip off old protective covers and clean up any smudges.
I have nearly 300 pictures, so it was a major event to get them all into sleeves (you can get those here), sealed and taped to size.

Finally, each one had to be priced. Ones I sorta wanted to keep I put high prices on ~ high enough so that if they sold, the pots of gold would overcome my sorrow.

As soon as that was done, I put 74 of them up on a webpage so people who couldn't come to the Show/Sale could still buy one if they wanted. It's here. 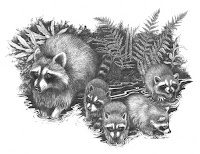 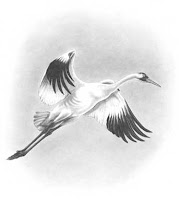 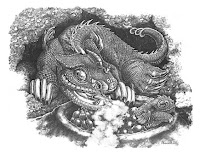 And for those on a limited budget, I made up a number of prints of some of my favorites, which are 8 x 11 and will sell for $10 each.

Have you priced easels recently? They were far out of my financial reach, so Daniel (my ex-but-best-friend) volunteered to make twenty big easels. I volunteered to be gopher and sander and such. Daniel and I have been working in a mostly unheated shop and it's been in the 30s and 40s, so things are taking a bit longer because we get chilled and have to stop. We have put in much more than 16 hours each on them so far (just talked to Daniel, and he oiled some last night, and we're going to work on them together tonight at his house). We're putting two crossbars on them in 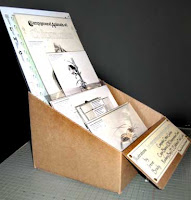 order to double up pictures, 2 per easel, if needed (see the raccoon pictures, above).

But how do you display (or even arrange for viewing) all those works of art? Since I fill book orders when I sell my books, I buy cardboard shipping cartons by the hundreds, and I have new boxes in bundles. I pulled out a 12" x 10" x 8" box and got busy with an X-acto blade, and invented a display bin (see photo) and book stands! 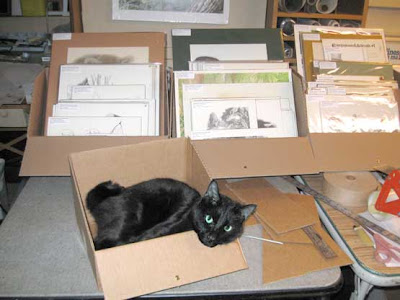 (How-to for the box easels and book stands at the end of this blog.) All this was done under the supervision of Jessie-The-Cat, who is a hard taskmaster.

I discovered I could make large and small individual book stands. On each table I will have art bins full of illustrations plus the books the illustrations came from propped up in book stands on either side.

So in addition to 12 art bins, I cut and assembled about 15 book stands to add to wooden and metal stands I had already, then I made some larger box easels, using the same pattern as the book stands. Table easels will hold the biggest illustrations while the box easels will hold lighter, smaller ones.

And then, with all the nitty gritty done last week, I sat down to design my 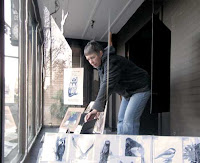 window dressing, which I did yesterday. It was really intimidating to me. The empty window was scary. Could I really do it?

After innumerable trips outside to see how things looked thisaway and thataway, I think the window turned out really nice ~ attractive, interesting and instructive.

I hung around last night watching people stop to look. They examined the illustrations and books closely to see what on earth an illustration looks like before and

after it gets into a book, and (hopefully) thinking what a unique Christmas gift that would

make. A huge owl looks out with round eyes from one part of the display, and I also put a hanging mobile of birds (from an illustration) in the window. Since there are air currents in the window the birds move and attract attention.

THE SHOW
Setup will start at 7am on Saturday, and I'll Fling Open The Doors at noon.

Hordes of people will rush in, shop around, then sail out the doors with their purchases and delighted smiles. I hope.

So there are SOME of the details of preparing for the show. Two months of non-stop labor. Hope you can come to see it. Wish me luck!

Here's the How-to for the box easel/book stands. 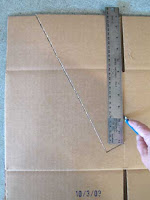 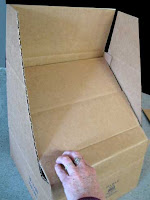 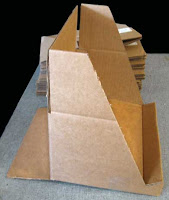 1. First, flatten the box and mark the pattern on each end as shown above. Make a template so each side will be the same. 2. Cut out the piece on each side as shown in the first picture. Use a sharp blade so you don't get ragged edges. 3.Crease two lines across the front of the box -- see where it has to fold in the third picture and crease there. Use a dull point so you don't break the surface. 4. Fold the front along the two creases, the first one down and away from you, the second fold toward you. Tuck it in. 5. Tape three of the bottom flaps closed, but let the fourth, at the rear, flap OUTward to help support the contents of the box. 6. If you want a short stand/easel, cut off the top flaps. 7. If you want it taller, tape the corners of the flaps together as shown in the fifth picture. 8. Below are views from side and front. 9. For easy storage or transporting, it's okay to tape the flap corners but don't tape up the bottom flaps until you are ready to display your items (see the final picture).
(You can use boxes from the grocery store if you turn them inside out or cover the print with something.) Have fun! 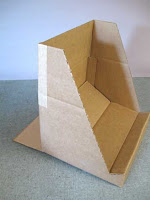 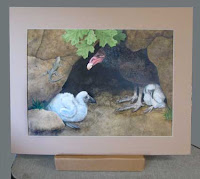 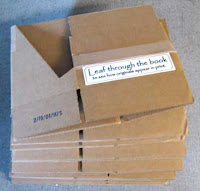 Your windows look terrific! I sure wish I could see all this "live," but I am LOVING what I was able to buy over the web. Hey, maybe you'll even put some more up that way.

All this effort will pay off!! Great job! Wish I could be there too :)

Delightful Renie! Really lovely! Best of luck and thanks for the box easel! How clever!

Hey, can you tell me if the box directions appear usable? At least when you read them and look at the pictures? I whipped them off in a hurry, and it's easy to leave things out. I built a shed one time from a published step-by-step book, and they left out the how-to for the floor! If you don't have time to look again, no problem.

Either way, thanks for the feedback!

P.S. I'd loooooove it if someone would try to make one of these and tell me if the directions work....