Sometimes I do illustration jobs, and at the moment I have two in the hopper, both interpretive signage for nature trails. I just finished a really interesting one which took a great deal of time ~ a section of Jeffrey pine trunk with three lichens on it. It was the third in a series, the first two being a distant view of the entire tree and a composite of bark, branch/needles, and cone.

In case you've never met a Jeffrey, it's a western pine similar to the prickly ponderosa pine, but the cones generally won't make holes in you if you play 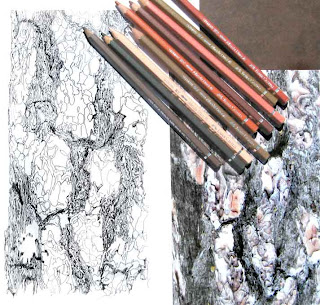 catch with them. DON'T try catching a tossed ponderosa cone!

The trunk of both is very similar: reddish, with a bark composed of layered jigsaw-shaped pieces. The bark has a sweet scent. Some say it smells like pineapple, others say it's a vanilla odor. I smelled one once and couldn't quite place the scent ~ but it was very pleasant.

At any rate, it took ages to work around all the jigsaw pieces then color them appropriately. I had a good photograph provided by the people who wanted the sign, and in order to meet the deadline I followed the shapes of the bark pieces closely (after some judicious artistic rearrangement) using my Wacom tablet and a stylus. To envision and create the shapes from scratch would have taken forever. Click on an image to see a larger version.

The first image (above) is the first run at the flaky bark, the original photo I was working from, the selection of watercolor pencils I chose to color it, and my waterbrush with the water in the barrel. My drawing is on the left and that's the photo on the right. 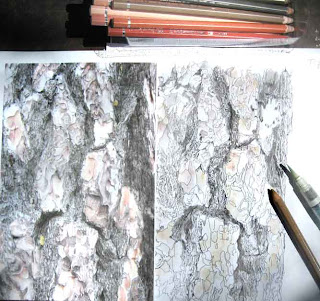 I had the outline finished, I printed out the b/w image to paint. I needed to work large since it's a large sign, so I separated the original illustration into two sections and printed them on two sheets of heavy, slightly toothed paper that I knew would take the moisture required by the watercolor pencils.

I was working out on the deck to enjoy the 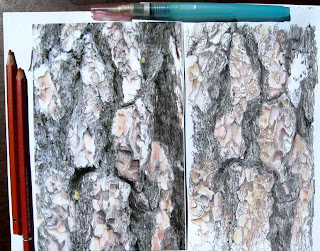 warm spring sunshine, so I taped a plastic dish to my masonite drawing board to hold the pencils so they wouldn't slide when I tilted the board on my lap. In the second image, with the photo on the left, I've started applying the color to the b/w image on the right. It looks a bit faded in the bright sunshine. I'm leaving unpainted the areas where the lichens will go.

The third image (above) shows the drawing taking shape and color. The photo is still on the left here, and while I'm using the reference fairly closely, I am taking some artistic license with the color and details. 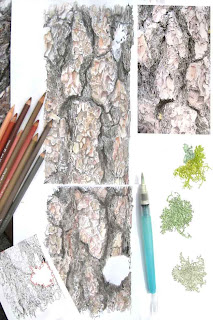 image you can see all the parts and pieces. The two-part illustration is on the left. The lichen illustrations will be layered into place after I blend the two parts together in Photoshop.

There is a slight overlap of the two bark sections, but since they're hand-painted, the two aren't exactly the same. The solution to join them seamlessly is to layer them into perfect place then use the eraser on 1% to remove the top layer until they blend. It works amazingly well, the joining being invisible when finished.

The photo is on the right in this composite. Down at lower left is a printout of my original drawing, showing a red outline where I planned to put the lichens ~ I didn't want to waste time and energy drawing or painting the area behind them.

At this point, I scanned the painted bark illustrations back into Photoshop to blend the two pieces together, add the lichens, and tweak the shading.

And the final image is a detail of the finished illustration. 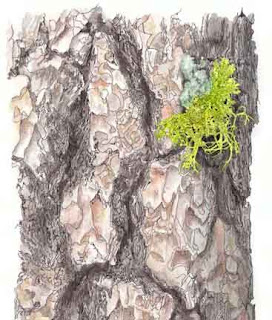 I darkened the fissures between the bark slabs to visually deepen them, using the "burn" tool in Photoshop CS2. I also used the burn tool to darken the right side, to make the bark appear to recede as it goes around the cylinder of the trunk. I also darkened a shadow below each lichen.

I'm pretty happy with this combination of design, handwork, watercolor pencil coloring, and computer blending. It took a long time, but the results were well worthwhile.

BTW, I taught my new Wildlife Sketching class last weekend. It was quite a ride. I'll try to get at that before this next weekend because I have another journaling workshop on the 9th and I'm trying to keep my ducks in a row! Wish me luck!
Posted by Irene Brady at 9:21 PM

Glad to hear you're busy too. I feel like I've fallen off the planet. Spring is popping and workshops are filling up. Soon it will be tooooo warm here to stay outdoors any length of time. And, my workshop clientele heads north - me too hopefully!

Have you received any book orders yet from Coastal Discovery Museum or other people from this area? Everyone loves the Swamp book. I'm wondering how good they are a following up and contacting you. Let me know if I need to remind them :)

I am very happy to have found your blog. I was searching for nature journaling and found you. Yay!

Hi Cathie,
Welcome! I'm happy you dropped by. This is a slightly atypical blog, since most of them are about nature workshops, but I nature journal all the time and it's nice to meet others who do, too.
Irene

Hi Pam,
I answered you via email, didn't I? Thanks for stopping by! Let me know how your classes are going. Mine have dropped in attendance a bit, due to the economy, I expect, but the students are just as terrific as ever, eager to learn, fun to play with. My last class insisted they weren't working -- just having a play day! The more classes I do, the more relaxed I get about it all, and I think, the more the students enjoy the material.

Quite useful info, thank you for the article.