Sketching at the Black Sheep

I was supposed to have a workshop this last weekend, but only 3 signed up, so I reluctantly canceled. I'll be teaching the same workshop, Basic Nature Drawing, again in July, so perhaps they'll sign up again, with a lot more company.

It still isn't done, as I have a huge cedar "plank," 6'x3'x3" sitting in my yard on sawhorses, wrapt in a tarp against rain and snow, awaiting my ministrations as sander. A huge task. It's still too wet and cold to deal with. Maybe next week! The plank is destined to be a counter/bar, and since my house is pretty rustic, it should fit right in. 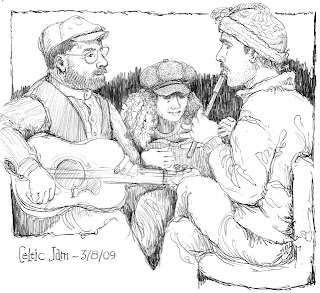 And on Sunday, I went to The Black Sheep Pub again to sketch the Celtic Jam Irish musicians. I've been experimenting with design elements, and I really like how this major sketch came out (I did a couple of small ones I didn't scan in). The musician on the left, one of my favorites, turned his chair, left and came back then switched to playing the "bones" while I was trying to draw him, so he ended up just holding his guitar in the sketch. I love how he dresses the part, in the old-fashioned pin-striped shirt with its simple buttoned collar, the green vest, and that hat. I could only see the girl's head, with that wonderful hat and hair, and I THINK, in retrospect, that she was playing a different instrument. I only got a glimpse of it, and I think it was tear-shaped instead of a violin shape. Ah well...... There were ten of them playing yesterday, seven men and three women. This is just the ones that were closest (and somewhat visible).

When I visit one of my groups, EverydayMatters, I'm always entranced with the heavily designed pages/drawings people do in their journals. Up to this point I've been fairly simple in my renderings, mostly without backgrounds. So maybe I'll give this concept a ride in future entries. The box/line around it really does hold it together!

My Intermediate Nature Drawing workshop is weekend after next, the 21st, so I'll post that next time.
Posted by Irene Brady at 12:15 PM

Oh, NICE, Irene! Love it! Sounds like a wonderful time...and yep, I've had workshops that had to be canceled too. Looks like you made excellent use of the time!

Really lovely and lively sketch. Ah, I can hear the music now.....i find Celtic music so evocative, just takes me away to another world. Beautiful entry.

Thank ye kindly, ladies! I love to share those sessions. They take the place of a life-drawing class for me, with the added advantage of being free, plus providing great music (and yes! evocative, Joanie!) and beer on tap!

One sketch I missed on Sunday (it didn't last long enough to draw) was a lovely colleen whirling in circles with a small child in her arms, long black hair flying. The child, with out-up-stretched arms and crowing with glee, clung with bare toes to her waistband. What a picture!

Oh it does look good- I think the box really helps :)
I love those heavily designed pages too :D

That sounds like such a fun time, great sketch.

Great sketch, with the dark background value and lines holding it together!

Thanks Anna! I had hoped that was successful. I looked at it backward so many times to check it out that by the time I finished, the backward version was just as familiar as the frontward one, and I wasn't able to see it clearly.

Glad it came through okay!