We went birding with Gerardo today.

Gerardo is superb with the scope

and always knows where to find the birds. We had excellent viewing since he took us to an anticline (a place where various habitats meet and blend) of forest, beach, meadow, and stream. Do remember to click on the thumbnail photos here for a larger view!

There was a Tico on a horse, herding the cattle, which appear to be a Brahma crossed with some other breed. Many are white, but there are some gorgeous

spotted ones. Having been raised on a farm, I am attracted to cattle, which I think amuses Dan'l

We saw more than 23 new bird species, one of which was a rare Pearl Kite, not even listed as being in this part of Costa Rica. I gave Gerardo my Costa Rica birdbook

when I left because a previous guest had walked off with his copy, so I can't look it up and confirm it, but I think that's correct.

I got a photo of the kites through the spotting scope, and also a pair of nuzzling macaws. I'd like to get a lot better at photographing through the scope.

The problem with trying to do it on a birding trip is that everyone else either wants to look or take a photo, too, so there's no possibility of hogging the scope while waiting around for a good pose.

The scarlet macaws are a bit blurry, but their character, at least,

shows in the photo. I was keeping a birding list from the time we landed in San José till the time we left, and although I had seen a couple of the birds from the birding trip previously on our vacation, the main list we saw is in the right-hand column of the journal page.

After our return and breakfast, I meandered around El Remanso's beautiful grounds for awhile, snapping photos of some of the amazing heliconia flowers, then sketching the rare, solitary Ghost Bat that hangs in the rafters of the Yoga Pavillion, and finally just sitting on our terraza watching the birds flit in and out of the shrubbery with the binoculars and writing in my journal.

Later I got a massage because I was feeling a bit bedraggled. I thought that maybe I was having too much fun, but I was actually coming down with a case of Montezuma's Revenge, which was taking 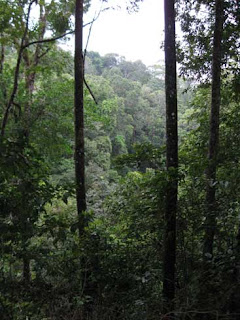 its toll on Daniel, too. So the wonderful massage was the second high point of my day.

Watching dusk descend is a regular evening delight with the insect and frog choruses striking up and pulsing in the warm air. Night temperatures hovered around 65° to 70°, just perfect for sleeping, so sitting out to watch the forest and the fireflies by moonlight (half a moon so far) was one of my favorite things. Tonight it rained, so there was that added attraction as well, watching lightning and counting the seconds to determine how far away the strikes were .

The Southern Swamp Explorer Update: My printer rep just called to ask how things were going on preparation of The Southern Swamp Explorer, and when I told him the cover painting was only half done he mentioned that their queue is now about four weeks, so if I get everything to them by, say, next Monday -- all the book files and the cover, ready to print, it would still be the first part of September before I get my books. Yikes. So I'm going to be jamming on that cover painting for the rest of the day. I'll try to put up a scan tomorrow on my progress.
Posted by Irene Brady at 10:14 AM