My Sketch-Journaling Workshop for Kids ~ Day 3


Day III had a couple of little problems.

I had just barely gotten started teaching when a loud, nasty buzz filled the room. FIRE! Teachers are supposed to be informed about fire drills, but neither Tim nor Joyce had heard anything about this one. Maybe it was real.

of my recent camera debacle, my long-time readers will be pleased to hear that I managed to grab my camera before leaving the room. But it occurred to

me as we were quietly trekking down the sidewalk that I had left my most recent, and very precious, Costa Rica Journal (which I had brought to show the kids) behind in the classroom. If the school burned down, I would have lost not only the photos of that trip (in my old stolen camera) but my journal as well, gone up in smoke. Then common sense prevailed and I let go of the thought. So what? Quit this darned "attachment" stuff, Irene!

The John Muir School is situated inside the Ashland Middle School, but is completely

autonomous (I think). It consists of a long hallway with classrooms on each side, a staff room, and a courtyard, connected to the Middle School by a double door. Students from both schools ended up in the parking lot for about five minutes before we were all allowed to return.

The kids acted calm, but I heard some of them later saying

that they had been scared because their teachers weren't forewarned and there might have been an actual fire (we were all looking for smoke). It seems that the information chain between the Middle School and the encapsulated John Muir School had a malfunction, and they didn't inform us. In that way, it was an extremely valuable drill, since it was far more real than usual, and a good test as to how teachers would respond in an actual emergency.

Back in the classroom,

the students began working through the workbooks I have created for my classes. Usually the books for the three sessions are bound separately, but for this class the school had gotten them printed up into one three-sectioned book for each student (I couldn't provide workbooks for so many students at the price they could afford to pay me, so they did it themselves). The kids left the workbooks on their desks at the end of each day. Now we turned to the third section and got back to work. Calculating what I'd now need to skip over to make up for lost time, I began to teach them about watercolor pencils.

I showed them my sketching carry-bag kit

and what I take along to sketch and color my artwork. This includes a small, waterproof pad to sit on, my drawing kit, watercolor pencils, hmmm....I'll just go out and take a picture of me wearing it right now ~ it's an over-the-shoulder bag I barely notice when I'm wearing it. My sketchpad is poking out of one of the pockets. BTW, that's my new camera taking the picture.

I handed out worksheets about color wheels, an exercise to show how to blend colors using the watercolor pencils (I forgot to photograph this exercise ~ darn!).

The school had bought several 12-pencil sets of watercolor pencils for the students, and half the room used those sets while I supplied the other half with my pencils. The school sets ensure that when my pencils were no longer available, the kids would still have several sets with which to color in their journals.

They sailed into this exercise

with excitement, and experimented with mixing their colors quite avidly. Then I passed around paintbrushes ~ I had eight waterbrushes (with water in the barrels), and twelve regular brushes.

On the remaining projects I would ask students to switch brushes to make sure all got to experience the waterbrushes. When they'd gotten the feel of what happens when you add water to the watercolor pencil marks, they were ready for the Orchid Project.

I handed out orchid

outlines printed on heavy paper. I've discovered that vellum bristol cardstock, which you can buy in most copy shops, stands up well under repeated erasing and water application, so I had printed out the orchid outlines onto this cardstock. For this exercise, I wanted to teach some paintbrush techniques for getting color

where you want it, looking the way you hope it will. We practiced "pushing the edge" and using horizontal brushwork to get a nice sharp outline, blending from color to no-color. This was very "step-by-step," with little room for individual variation (only the color of the background was optional), and we practiced

until most of the kids had a grip on the process.

I neglected to take any photos of this exercise, too, but when we went on to the next project, which allowed students to select their own colors and apply them as they wished to a mountain scene, there were still a few

orchid exercises lying around, which you can see in a couple of the pictures.

One unfortunate aspect of doing watercolor pencil paintings is that the paper needs to dry between applications. I had to go around the room drying pictures with one hair dryer, with the help of a willing accomplice wielding another hair dryer. This was a good time for the other kids to take a short break, as it took about five minutes of noisy drying to do this. They grabbed the chance to stretch and goof around.

The "color-the-mountain" project allowed them to flex their wings a bit, applying colors and blending them with painting techniques, without having to take time to draw the mountain. Ideally, we'd all go out and draw a mountain, then color it, but in a three-day workshop you cut some corners. Colorful mountains decorated the tables as lunchtime approached.

After lunch we would tackle some foliage techniques to use in their EarthTeach journals, then go on to our big project, The Apple. Or rather, we'd do all that after the Arbor Day Tree Planting.

Wouldn't you know, on this most busy of workshop days, we'd not only have a fire drill, but we'd also be attending a half-hour tree planting ceremony in the courtyard (the tree was donated by my dear bud and former

mate Daniel Bish, from Plant Oregon!). So after lunch and a short stint of foliage sketching, we trekked out to the

courtyard to plant a tree, accompanied by a reading by one of the students. We sang tree-like songs, situated and planted the redbud (I think) tree. Then Tim took the group picture of us which appeared a couple of blogs back, and we went back to work on our next-to-last piece of the workshop, the apple.

I'd brought a bag of small apples (kinda mushy ~ it is April, after all), streaky red and nice models for drawing and coloring. After they drew the outline (using my tips on positioning for interest, drawing stems, and other pointers) I showed them how to apply a yellow

undercoat (for brilliance and depth) before adding the red color, then how to shade it to make it look three dimensional. Tim tried coloring apples with and without the yellow under-wash (see the picture). Then I took photos of any of the kids who wanted their artwork to go up on this blog. With the fire drill and the tree planting, they didn't really have a chance to finish them as completely as they wanted, but they all had fun trying and experimenting with the color techniques.

was scheduled to go on a field trip to the coast the next morning. Sketchbooks and colored pencils would go with them. I hope I get a chance to see what their journal entries from this beach visit look like!

In fact, I'd really love to see their journals before and after the workshop, to see if they were able to use what they learned in a meaningful way. Yo, Tim, give me a call! Let me see! May I take before and after pictures of journals? 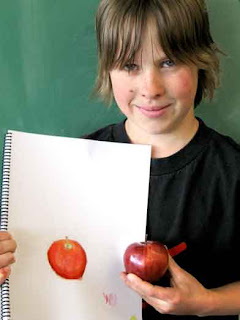 I was secretly, sort of, hoping to get invited on the trip, but they probably assumed I wouldn't be interested. Oh well.... it may be just as well, as I was pretty exhausted after three days of workshop in a highly unaccustomed (for me) situation. How do teachers DO that all year!!!!???!!!

Be sure to click on the pictures of the kids who wanted to share their apple pictures to get a closer view. Not bad for only three days of instruction with brand-new tools and techniques, huh? Nice work, kids! I'm very impressed with your results. I was also pleased with the

of the students who didn't get in line for the photoshoot. The apples that didn't appear here were equally beautiful.

So that's my Nature Sketch-Journaling Workshop with kids. I needn't have worried that whole week while I was preparing for it ~ we all had fun and learned a lot. So far, I've gotten back seven evaluations from the students, and I've decided to leave the books at the school for a few more days and hope the rest of the students will finish and return their evaluations this coming week and claim their Beaver Year books.

The evaluations I have already received are full of good advice and information from the kids. Now I know some things I would do just the same and and other things I might do differently. I probably learned as much from this workshop as my students did!

Many thanks to Tim and Joyce, who worked so hard to make this workshop fly, to the grant source and the parents who helped to pay for it, and to the students who made it a wonderful experience for me, and also for themselves. I hope we get a chance to do it again some day.

[NOTE TO ALL SKETCH~JOURNAL STUDENTS FROM THE WORKSHOP: Leave me a comment here if you want. Did you have a good trip to the beach? Did you use some of the journaling techniques you learned? I'd love to hear from you! ]
Posted by Irene Brady at 10:11 AM