Oh, Rats. I just heard back from The Artist's Magazine that they are working on their June issue now, which comes out in mid-May, which is only 6 weeks before my Costa Rica Sketch/Journaling Workshop July 7-10. For $340 I can get my little 1"x2.5" ad (see the previous blog) placed, or I can get a listing, with no formatting or picture, for $150 or thereabouts. I didn't even write the amounts down. That's prohibitive for a listing appearing that late and for such a short time. Too bad I didn't schedule the workshop for a month or two later, but that would take it into the wet season in Costa Rica, which might not be ideal for such a workshop (even though it is remarkably lovely there then). Hmmmm.....

Well, I do have the list of people who requested information about last February's workshop, and I can mail them the flyer, so all is not lost. And I can keep writing about my workshop preparations on my blog, which gets picked up by the web crawlers. I might also look into promoting my workshop using Google's AdSense. More about that later.....

Because right now I'm busy with something else ~ I'm sitting here at my computer surrounded by an arc of manuscripts, all combbound and each turned to the same page and propped up on a stand of some sort. This is the final proof-editing for my upcoming book The Southern Swamp Explorer.

The manuscripts are freckled and slashed with red lines and scribbles, arrows and saucy comments, critical observations and puzzled questions. I would take a picture of this imposing arc of criticism to show you, but Dan "borrowed" back his camera to take a picture of a tree for a customer down at the nursery, so I can't. It's time to buy a new camera, obviously!

ButI CAN scan in one of the pages. 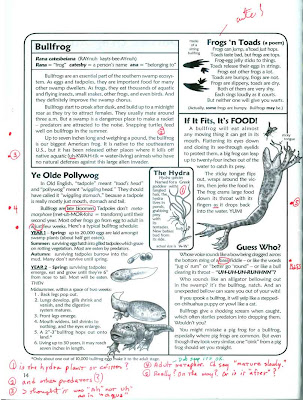 This is page 14, upon which I'm working at the moment. There are also eight other red comments for this page scattered amongst the other five manuscripts, and it could take me up to twenty minutes to do a single page. More if I have to readjust spacing or content to fit new text. This is my sister, Laura's copy. At least she thinks the poem is cute. I don't get a LOT of praise on these critique pages, although my proofers seem to think it's a good book. They're concentrating on what's NOT right.

Here's the poem Laura likes, just in case you can't pull up the page at left, or can't read it when you do:

Frogs 'n Toads (a poem)
Frogs can jump, a toad just hops.
Toads taste bad, but frogs are tops.
Frog-egg jelly sticks to things.
Toads release their eggs in strings.
Frogs eat other frogs a lot.
Toads are bumpy, frogs are not.
Frogs are slippery, toads are dry.
Both of them are very shy.
Each sings loudly as it courts,
But neither one will give you warts.

(Actually, some frogs are bumpy. Bullfrogs may be.).

My critiquers comment on the illustrations, too, but I won't be improving illustrations until the next round (right now I'm sticking to text changes, or I'd get hopelessly bogged down in minutiae (is that spelled right?).

My proofers are master critiquers. They know I can take their comments, so they don't pull any punches. Being the author, illustrator, editor, publisher, promoter and distributer takes a certain amount of toughness which I have developed considerably over the years ~ I used to be a real criticism wimp. Now I can just grin, shrug, or even make a suggested improvement without a single change of expression as I type. My goodness, gracious!!!! {grin}

So anyway, along with preparing and promoting the workshops (and giving them, of course) over the course of this spring and summer, I will be sprucing up The Southern Swamp Explorer, painting a cover for it, and sending it off to press, hopefully before fall. I'll keep blogging about the process as I go ~ the interesting parts, anyway.

A couple of days ago I received a very nice Foreword from Dr. Bob (that's Dr. Robert Thomas), who chairs Loyola's Center for Environmental Communications at Loyola University in New Orleans. You may wonder "How'd she snag him?" and the answer is "The internet is a wonderful thing."

Bob used to have an internet column called "Ask Dr. Bob" and I found it online and sent him a number of swamp-type questions, which he courteously answered. Our communications bloomed into a friendship and eventually a boat trip out into the marshes on one of my swings through the southern swamps. I took along my rough draft of the book to show him (I think I was on draft #5 or so by then ~ it's on #9 or #10 now) and he liked it enough that when I asked if he'd write a foreword, he agreed. He even did a final ms. proofing for me, invaluable when one is writing about such a diverse and detailed roster of subjects.

At any rate, the Foreword is glowing, which makes all these pesky red squiggles not quite so annoying. And hey, while I don't utilize every single red comment, I'd guess that at least 90% of them are taken and used. As far as critics go, my best critics are those who don't know the subject I'm talking about very well, and will ask about it or tell me I forgot an important point or phrased something badly, or missed the boat entirely. And I've got a fine bunch helping me.

"They" say to NEVER rely on your family and friends to proof your manuscript. I think that depends on just who your family and friends are. With their various talents and backgrounds, I don't think I could have picked a better bunch. And with that, I'd better quit procrastinating and get back to work. There are 124 pages in this book, and I've barely begun!
See you in due time!
Posted by Irene Brady at 12:21 PM

Irene, I really enjoyed looking at this, reading about the process and looking at page 14. Love the poem! :)