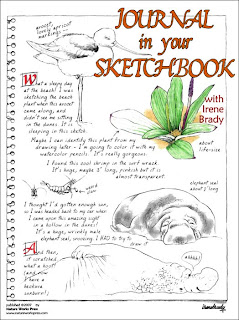 WELL! I have had quite a month! My computer crashed with a resounding thump the third week of August as I was preparing the workbooks for my newest workshop, the one I've been chronicling here. It has taken me quite awhile and quite a jouncy ride to get a new computer up and running, the workbooks finished and off to the printer so they could arrive here in time for the class, and to finish gathering teaching materials and getting ready to teach that class. WHEW! 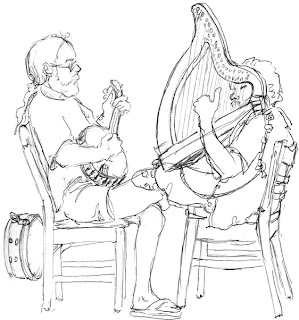 Below is the entry I managed to prepare the week after the crash (but never got a chance to post), and now I'm already in the middle of the Journaling workshop so it is slightly out of date -- but there's some really interesting news in it so I'm going to post this tonight and then post the info about the workshop (how it went, what I'll have to change, and other cool stuff, plus pictures) tomorrow or the next day. So start reading, and keep tooned.

Hoo boy, it's for real now! My classified ad just appeared in the September issue of The Artist's Magazine (page 84, top left corner!), and I have two students signed up already plus the magazine has sent me "leads" from people who registered interest in it. Looks like it's a go! I need to send out info to those leads soon!
I spent some time putting my Journaling Workshop web page together, too, and I think it looks pretty exciting. El Remanso, the wildlife lodge in Costa Rica which is hosting the workshops, has also put up a web page about it.
I have my first go at the class in just a couple of weeks here in The Rogue Valley (that's what they call this area, since the mighty Rogue River, of Rooster Cogburn fame runs through it). The class is listed on page 33 of the Ashland Parks and Recreation Guide along with the new venture that fellow artist Cathy Egelston and I are going to try, 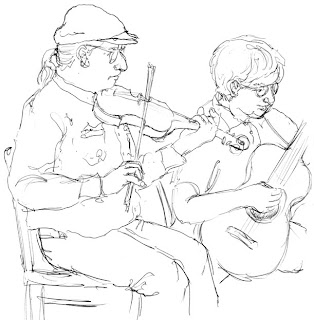 which is leading sketching rambles in Lithia park on the 2nd and 4th Mondays in October and November.
I've heard of other artists going out and sketching with whoever shows up for the "crawl" and thought it sounded like fun -- so we'll give it a try. Since Cathy and I both teach in the area, we figured it might be a nice way to get acquainted with potential students -- they can come and get a free look at us before committing time and their hard-earned money to a class or workshop.
My workbooks aren't finished yet, though. I had finished the sketching workbook and was putting the finishing touches on the writing workbook when my barely-2-year-old computer crashed. Gone. Have you noticed how time seems to pass by so quickly as we 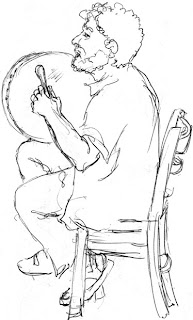 get older? Well, I thought I'd backed up just a few days before, and it turned out it was three WEEKS before. I lost a lot of work I'd put beau coup time into, and I also lost all my email for the last many years, all my contacts, etc. And I lost EVERYTHING in the workbooks.
Actually, I'd printed out a fairly recent draft (with only (!) a couple of days of improvement lost), but I'm in Oregon and my InDesign program disk was accidentally left in Idaho last time I went, so there was no time to start over and no time to get it here with the Labor Day Weekend in the way. So I've been scanning all the printed draft pages into Photoshop, making the needed changes graphically, and I'll put those 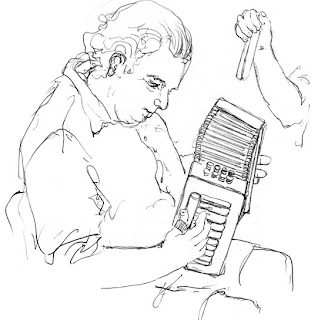 into pdfs to send to the printer. They'll work fine -- it's just not how I planned to spend my week!
And oh, if you've ever had your computer croak on you, you'll know the agony of sitting down to do something and discovering that something needs installing, or you're missing a beloved program that you only had on your computer and have no way to replace.
So it's been a tough week, but at least my new computer is up and running and my old scanner works again, so, soon I will scan in some of the things I've been sketching. It was SO much fun drawing the Irish musicians again last week! Thirteen of them at one point, with harp, bodhran (drum), mandolin, guitar, fiddle, pipes, bones, box, button accordian, and banjo (hope I didn't forget anything!).
Posted by Irene Brady at 8:56 PM