Working on My Display Booth 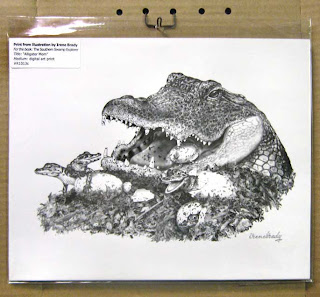 blog entry I was showing you how to make little hooks to hang small items on a pegboard. To show you how they look (and to give myself a working model of a pegboard panel), I punched some holes in the edge of a piece of cardboard with my paper punch, at 1" intervals and hung a couple of the prints in the plastic sleeves I had mentioned.

The horizontal sleeve was punched through the edge of the sleeve 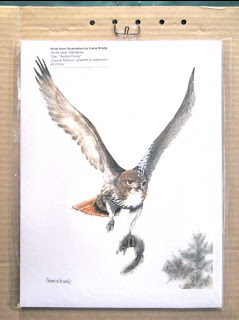 (the first image above). For the vertical print (second image), I attached a folded over piece of transparent tape, then punched through that double thickness (the 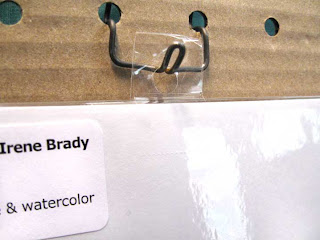 third image at left is a close-up of that detail).

I went to a party yesterday afternoon and happened to meet a couple of other people who also have booths in the Artisan Emporium ~ it was just chance, not planned. It's really great to get a chance to jam with other people and match your burning questions to their experienced answers:
"Do you worry about theft?"
"No, the front counter is right next to the door, and nothing has disappeared yet."
"I know everything has to be tagged, but how do you attach a tag to a book?"
"Not to worry, just lightly write the info [booth number, item description & price] inside the cover"
Etc.

Unfortunately, if you have a pretty card, some people will take it just because it's pretty. So that has to be taken into account since there is some expense involved. For a booth like this, with lots of visitors, you might want to create a relatively plain card which would only be picked up by people seriously interested in your items. 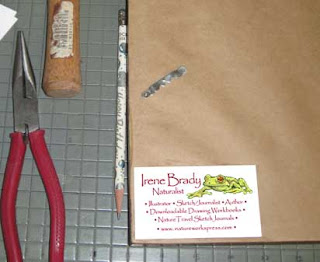 There are a number of other things to consider, too: whether you want repeat business AND do your business cards have the right information on them to allow them to do that? How much did they cost, and since a lot of people might just carry them away and never respond with more business for you, can you absorb the cost if they disappear quickly? Do you want to put them out there just for the taking, or should you attach them to your item? In the image above, I have glued a business card onto the back of a framed picture. This avoids the problem of people walking off with cards they don't really expect to respond to, and it also keeps your card with the item. It's one good solution to the problem 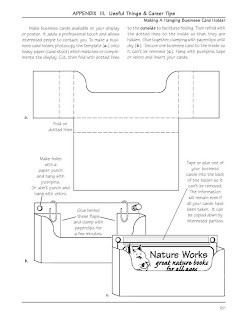 it to the item with a string. This is good for large item, but it can overwhelm something small.

In my book Illustrating Nature, Right-brain Art in a Left-brain World, I suggest a way to make a small card holder you can attach to a display to make your cards readily available. Click on the image to see this page out of the book. You should be able to print it out to get the usable pattern if you'd like to make one. There is a lot of other good information like that in the book, in addition to illustrating instructions, in case you're interested.

Today I've been making sure everything I plan to display is labeled with either a tag or a written notation (those would be inside book covers, since I'm also selling autographed books in the booth). My biggest problem was visualizing the space so I could plan what and how much stuff to put in it. Even the photos I took of the booth weren't quite sufficient ~ I needed something tactile ~ I needed to do a pre-run. 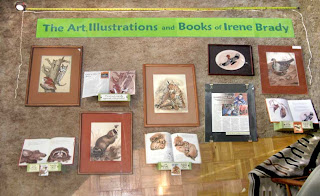 So I got out my measuring tape and measured off an eight foot section of my living room floor, then outlined it with string. I laid out EVERYTHING I planned to put on that space, then climbed up onto the kitchen stool to look it over. Here was my first layout, (I tinkered with it after this photo, so things will look a little bit different, but not much). The banner was a trial version, slightly thinner than the final version, which is now hanging in the booth. With all the pieces in place, I could see what worked and how well. 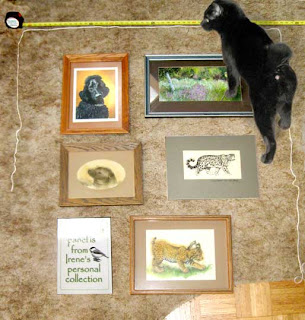 also laid out the four-foot side panels, but nearly had a disaster when Jesse discovered my little pre-run and went into one of his commando routines....executing a rip-snorting whackity snatch maneuver which left everything scattered hither and thither. I had to lock him out in the chilly yard for half an hour until I had "re-hung" 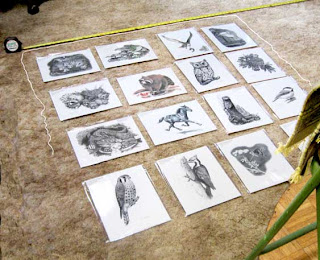 So, the left panel is on the left here (the one showing Jesse making his evil plans) and the right panel is on the right. I was going to just hang prints on the right side, but after laying this out and looking at it for awhile, I decided to hang only a couple of prints, place the box of prints directly below them so people can paw through them, and use the rest of the space on that wall to hang some more matted originals. You can see how actually laying out the materials on a fake wall can be helpful. I will print these photos out to take with me when I go to set up the space. 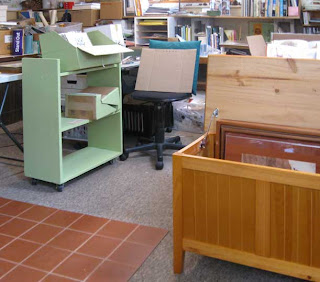 So it's moving along. I emailed the newspaper and told the reporter that I will be setting up my booth this week, and she says they may do an article about it. That would be G.O.O.D!!!

Okay, back to work. My studio is an absolute impassable wreck. In the photo here you can see the rolling bookcase I painted green. Setting on the top shelf is one of the boxes for unmatted art and prints.

In the foreground is a toy chest I got at a big box store for $34. It was a floor model, already assembled. They had just quit carrying that model, so they sold it to me for the same price I'd have paid if I planned to spend an hour putting it together myself! Deal! Oh yeah, the reason for the toy box is to put extra pieces of everything in, so if I go and there is an empty space on the wall where something has sold, I'll fish something out of the toy box to put in its place. On it I will put the two identical green-painted boxes of prints/art.

On the rolling office chair is the piece of cardboard with the pegboard holes punched in it. Every surface is covered. I have to dance a dainty minuet to go from one place to the next. Yikes.

By the way, below is the diagram I made way back in the beginning to start thinking about the project. The middle panel is how I thought the booth might look from the front (well, it doesn't, but it got my brain moving). The left and right panels show what those panels might like if you were standing inside looking first to one side, then to the other.

it, you can see how I plan to place the boxes for prints and unmatted art on the toy chest, and put the books in the bookcase. I think I'll also get a supply of picture mats which I can sell from a box on the bottom shelf of the bookcase. On the middle shelf I will put a couple of standing messages about copyright and other stuff. I may want to add another piece of furniture to hold other items. I dunno.

So... Next, I need to finish scoping out the contents of what I want to put on that right wall then start getting everything together. Tomorrow or the next day will be the big event, loading it all into Daniel's Montero (I could only get about half of it in my car, I'll bet) to take to the Artisans Emporium for setup.

When I go to set it up, everything could change as it comes together. Even having set it up on my living room floor, it might look better some other way when I get to the real thing. I'll try to remember to take lots of photos so you can see how it transpires.
Posted by Irene Brady at 4:50 PM

Email ThisBlogThis!Share to TwitterShare to FacebookShare to Pinterest
Labels: Setting up an artisans booth