Back from Costa Rica With Journal!

I've been back for six days, and trying to catch up with book orders (mostly for Illustrating Nature), working on the book cover for The Southern Swamp Explorer, both front (the painting) and back, the come-on blurbs which I've been chasing down and collecting all week. And catching up on sleep after a 26-hour return trip in airports.

Aghhhhhh! I think I finally caught up with myself this morning!

I've returned with my best journal yet ~ I was working to improve my page design. It's an acquired art to design a page as you write, to put in pictures and writing and still make them look nice together, and it'

s probably my weakest point. Well worth working on. I think I've improved somewhat, but you can judge for yourself.

Our vacation start was a bit slow due to a late flight out of our home airport (Medford, Oregon) ~ several hours

~ so I had some time to sketch and write. Getting off the ground finally, we flew over northern California where the giant forest fires have blanketed the canyons and valleys between forested 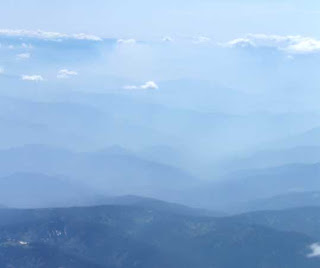 mountains in such a way that they look a great deal like Chinese paintings (except in those, it isn't smoke but much more benign fog).

We had a long wait in "Lost" Angeles, too, where I pasted ticket stubs onto a journal

had to produce the stubs to reboard. What would I have done if my stub had been pasted into my journal?!)

a photo out the airport lounge window. I think that's Guatemala City in the background. I had enough time to sketch first Daniel, then my water bottle before we began our next leg of the trip to San José.

Because of heavy booking over the July 4th weekend, we had to stay overnight in San José, but we took the

opportunity to sight-see and had a great time. We mightily enjoyed the cows....a civic art effort which will culminate in a huge parade of sculptured vacas (cows) in August. They were marvelously funny, and we enjoyed them and the crowds, the green parrots cavorting on

the frieze of a downtown public building ~ and even the terrific deluge that finally drove us back to our hotel six blocks away. It IS the beginning of the rainy season, after all.

The hotel van drove us pre-dawn to the Nature Air airport the next morning. We had to get up at 4:30, but this was a good thing. Everyone rises early in Costa Rica because the day is short, roughly 6am to 6pm and you don't want to miss a minute. The Nature Air planes are

was gorgeous, as the Nature Air planes fly low for great viewing and there was no clouds that day. The farmland just south of San José looks like a particularly beautiful patchwork quilt, but this soon gave way to jungle and the 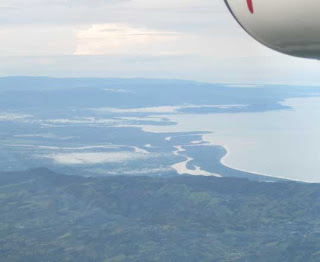 view of Drake's Bay to the west.

Gerardo the Driver (not to be confused with Gerardo the Naturalist at El Remanso lodge) picked us up at the airport and we arrived, finally, at beautiful El Remanso and our

lovely cabina, La Caramba (all the cabins have names), our home-to-be during our vacation. That's our cabina nestled in the trees.


I'm going to try to blog the trip daily, but I might miss a day now and then as I'm jamming on the Swamp Explorer book cover. Please come back to check every day or two.
Posted by Irene Brady at 9:48 AM

I loved seeing your journal pages and will follow with interest your project re: page composition. Thanks for sharing so much of your trip.

Shirley,
Thanks for stopping to comment.
As you can seem my page composition started off a bit clunky, but it improved with a bit of forethought.

Hope you enjoy the rest of the trip!

Irene!
It was so good to hear that you were back at El Remanso. I can't tell you how often I think of our fantastic week there last Feb.---all the good work we did in the workshop and what an amazing place El Remanso is.
Your trip down sounds loooong! At least you knew it was all worth it!
Best to you,
Marilyn (aka Maddie)